Side is a beautiful town on a small peninsula in Turkey’s province of Antalya. It was originally founded in the 7th century BCE by Greek colonists who eventually adopted the language of the indigenous people of the area. It remained in use throughout the ancient period of history. 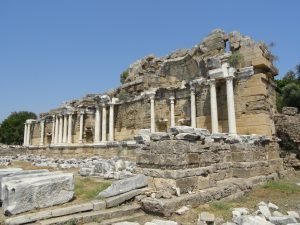 Side is a very pleasant place to spend some time as, unlike many other archaeological sites in the area which are usually separated from populated areas, Side’s ancient ruins are interspersed throughout a picturesque seaside tourist town.

A tour of the town usually starts at the Nymphaeum at the northeast end of the ruins (pictured left).

From there, a road lined with the empty shells of ancient buildings leads to the theater. 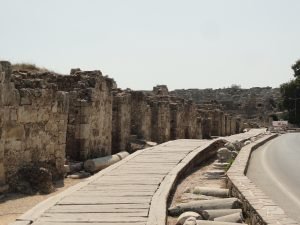 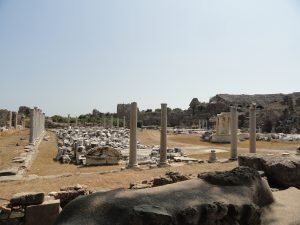 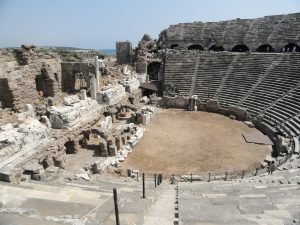 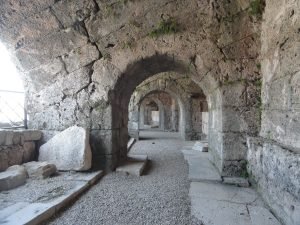 After passing under an archway, the visitor then enters the modern tourist town, with its shops and restaurants laid out on a grid. Near the harbor at the end of the small peninsula is Side’s most photographed monument: the remaining few columns and crossbars of a corner of what was once a temple dedicated to Apollo. 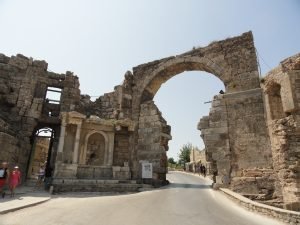 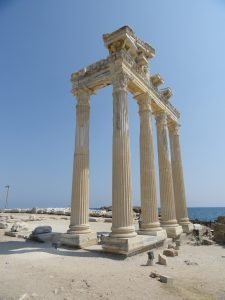 Near the theater there is a nice museum, the Side Museum, loaded with statuary and other artifacts found at the town. 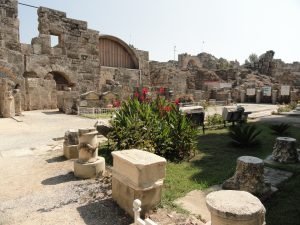 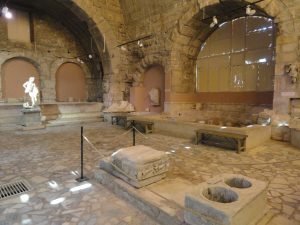 Tips for the Visitor
Side is a popular day-trip destination for tourists in Antalya. Side’s bus terminal is right next to the Nymphaeum at the north end of the ruins. However, there are no long-distance buses to or from there. There are minibuses running the 4 km between there and the bus terminal in Manavgat, where you can catch a long-distance bus.

If you are heading back to Antalya from Side, take the minibus heading for the Manavgat bus terminal, but get off at the intersection of the main highway to Antalya. At the northeast corner, there is a bus stop where the Antalya-bound buses will stop and take you the 80 km to Antalya’s bus terminal. And from there, there are many mini buses servicing all of the area resort areas.