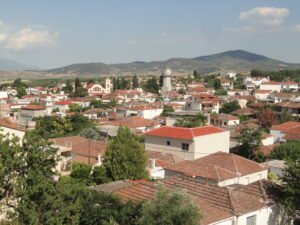 The town of Velestino is located 15 km west of the port city of Volos in the Greek region of Thessaly. Among the buildings of the modern town are traces of the ancient city of Pherae. It flourished in the late fifth and early fourth centuries BCE, at which time Pherae was the most important city in southeastern Thessaly. When the Macedonians took over the area in the middle of the fourth century, Pherae’s importance was reduced, especially after Demetrias was founded 16 km to the east-southeast in the early third century.

However, the city is old enough to be mentioned in myths and legends. Its mythical founder was Pheres, who was succeeded as king there by his son, Admetus. The mythical tale of how King Admetus was offered the privilege of having an unnaturally long life if he could find someone to take his place in death when his time came — only for his wife, Alcestis (daughter of the king of Iolkos), to end up as the one to die for him — is referenced in multiple ancient literary works, including as the subject of Euripides’ play Alcestis. In the works of Homer, their son Eumelus fights as the leader of the Pherae contingent in the Trojan War as one of Helen’s “wronged” suitors.

Indeed, there are remnants of the Age of Heroes in Velestino. Chamber tombs dating to the Mycenaean period have been excavated on the hill at the northwest edge of town (pictured below). Incidentally, there are more Mycenaean chamber tombs 2.2 km to the north, right beside the highway just northeast of the village of Chloi. 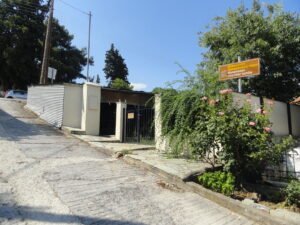 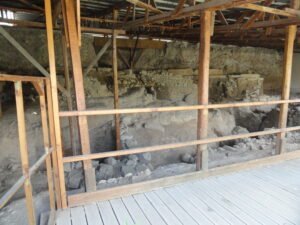 The main site in the town is signposted as the Hypereia Fountain. It was built in Classical times as part of a reservoir structure which took advantage of a natural spring here. 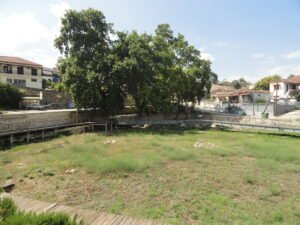 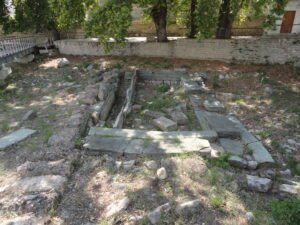 At the northern edge of town, just 200 meters north of the fountain, you can still see the ancient city wall in place. 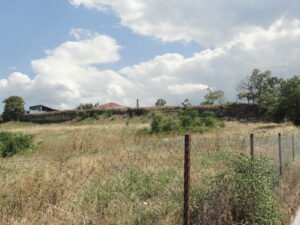 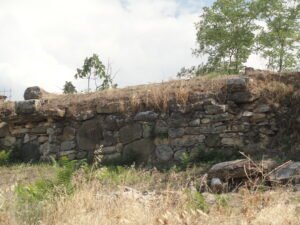 Just outside of town, 400 meters north of the wall, is a fenced-in site preserving the bases of the structures which made up a temple/sanctuary complex. The temple excavated there was previously thought to have been dedicated to the cult of Zeus Thaulios. However, more recent scholarship has disputed this, including the prevailing theory that the site was exclusively used as the main sanctuary of the goddess Ennodia, one of the principle deities of Thessaly in Classical times. 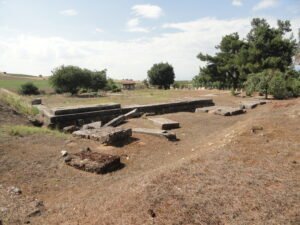 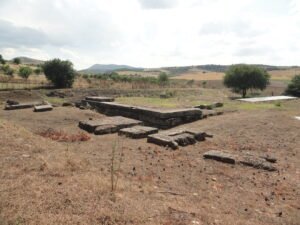 On the western outskirts of the town stands the Church of the Dormition of the Virgin and a cemetery adjacent to it, both taking up the northeastern end of an oblong hill. This hill was the site of the ancient acropolis, and if you follow the trail leading around the ridge of the rest of the hill behind the church, you can find rockpile remains of the structures that stood there all along the path. 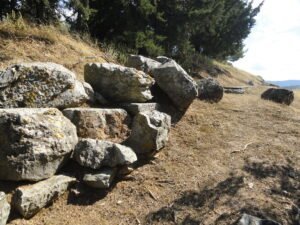 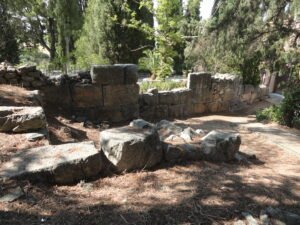 There is no museum in Velestino, but there is a significant number of finds from Pherae on display at the Athanasakio Archaeological Museum of Volos. 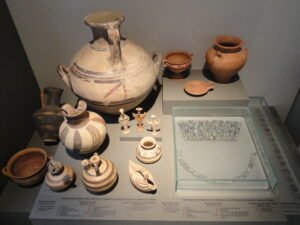 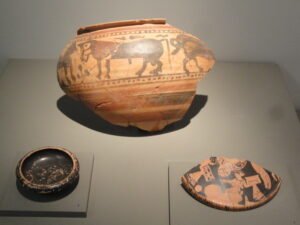 These finds include not only the ceramic pieces pictured above but also objects offered at the sanctuary complex (below left) and grave goods from the Mycenaean chamber tombs (below right). 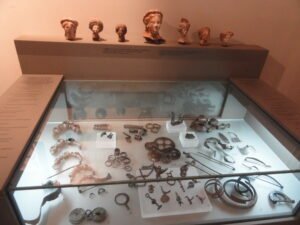 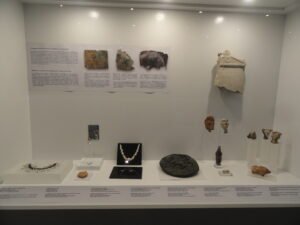 Tips for the Visitor
Of all the ancient sites mentioned above, only two are fenced in — the Mycenaean tombs and the temple site. The former appears to be permanently locked, although the tombs are visible from the street through the fence. As for the temple site, we found the gate open but unattended, so it appears someone is coming to open and close it each day, but it was not clear to us what the opening hours are.

Velestino Train Station is just 1.5 km northwest of the center of town. There you can catch a train to Volos (20 minutes) or Larissa (40 minutes), where you can transfer to the Athens-Thessaloniki line.