The ruins of the ancient city of Olympos are located 55 km south of the city of Antalya in the Turkish province of Antalya. They are just to the south of the village of Çıralı, and 46 km east-northeast of the ruins of Myra.

Like Myra, Olympos was one of the most important cities of the Lycian League. The city was conquered by Rome in the 1st century BCE, but at the time of the arrival of the Romans, according to Strabo, Olympos was under the rule of the pirate Zenicetus, who also controlled some nearby cities such as Phaselis, which was 16 km to the north.

The real charm of Olympos is its proximity to the sea. The beach at Olympos is beautiful and popular, and some of the ruins are right next to the beach. 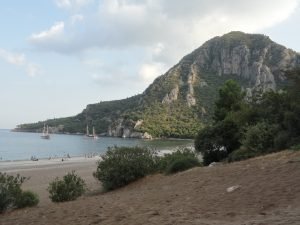 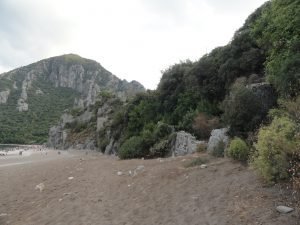 A stream runs through the site, and some of the ruins are visible alongside it. 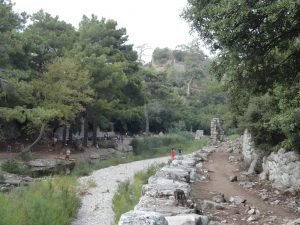 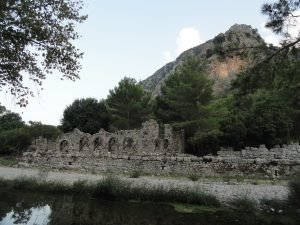 You can explore the rest of the ruins by trekking through the woods and overgrowth on both sides of the stream. 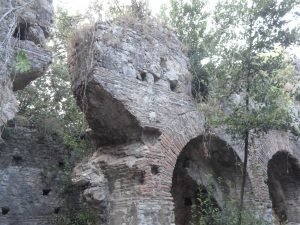 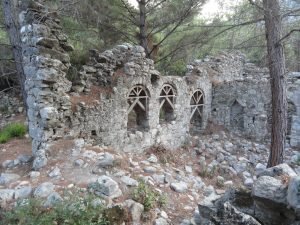 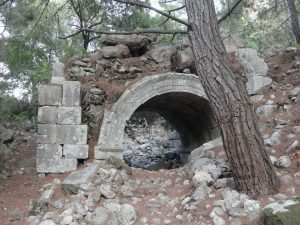 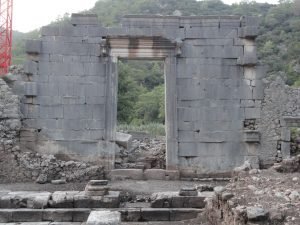 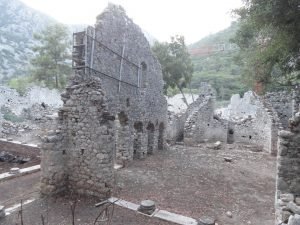 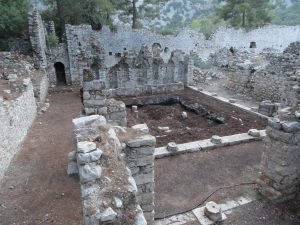 Another interesting thing to see are the nearby open flames of Mt. Chimera. According to myth, the Chimera was a fire-breathing beast which was defeated by the Greek hero Bellerophon. The story appears in Homer’s Iliad, and it is believed that the story originates at this site.

Since ancient times (Pliny the Elder and other ancient writers mention it), a whole landscape of vents on the top of the hill has been emitting a gas composed of methane, hydrogen, and other substances. The gas reacts to the oxygen in the air by bursting into flames as soon as it breaks the surface. The result is a series of eternal flames covering the hilltop. If one were to try to bury one with dirt, the buildup of the gas would simply cause another vent to pop up nearby.

Next to the field of flames are some ruins of religious structures going back to antiquity, including a temple dedicated to Hephaestus, god of metalworking, fire, and volcanoes.

Locally called Yanartaş (“Burning Stone” in Turkish), the site where the flames are found is on a hill just over 4 km north-northwest of the main ruins of Olympos. It’s best to go there when it is dark so you can see the flames better. 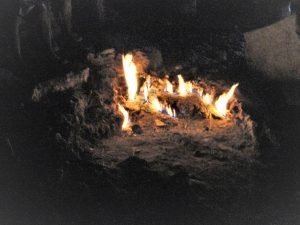 Tips for the Visitor
Although it is located off of the same highway leading south from Antalya as Phaselis, it is much farther from the highway than Phaselis. The road leading from the Olympos bus stop on the highway, which is located at the Olympos Rest Area (Olympos Dinlenme Tesisi), to the site is 10 km long, but there are minibuses at the rest area to take you to the end of it.

If you are looking to stay longer, at the end of the road from the highway, just before the site and the beach, there is a small community of budget hostels as well as restaurants, cafes, shops, and tour companies catering to the guests there and the beach-goers. It is a popular summer vacation destination for budget travelers from both Turkey and abroad who are looking for a laid-back, out-of-the-way place with sea, sand, and ruins. It’s a huge contrast to the atmosphere of nearby places such as Kemer which trade heavily in package tours.