The archaeological site of Isthmia is located on the eastern side of the Isthmus of Corinth, which connects the Peloponnese to the rest of mainland Greece. The Corinth Canal, the artificial waterway which cuts through the isthmus, is less than a kilometer to the northeast of the site. The site is on the western edge of the modern town of Isthmia and just east of the town of Kiras Vrisi. Ancient Isthmia was 10 km east of the ancient city of Corinth.

The most important ruins at the site were part of an important sanctuary dedicated to the god Poseidon. The original Temple of Poseidon there was built in the first half of the 7th century BCE, making it one of the first monumental temples built by the ancient Greeks. In classical times, it was burned and rebuilt, only to suffer more destruction of various types soon afterwards. 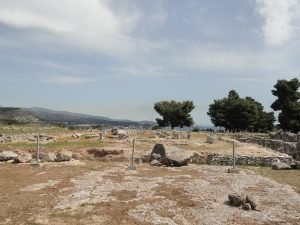 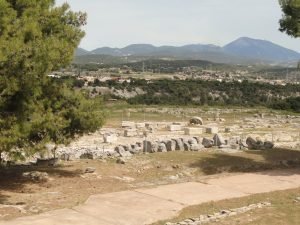 Next to the temple was the Palaimonion, a monument to the child whose death was the impetus behind the Isthmian Games, one of ancient Greece’s several athletic contests. 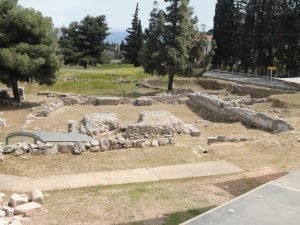 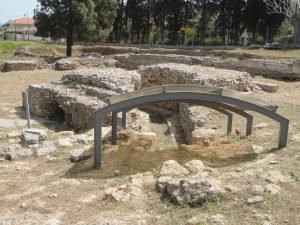 Next to the Palaimonion are the ruins of the original 6th-century BCE stadium.  The starting blocks where the runners competing in the Isthmian games began their races were marked then–and now–by wooden posts connected to ropes. 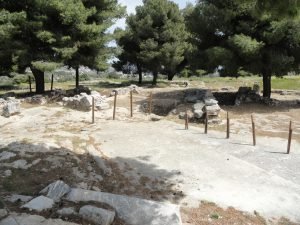 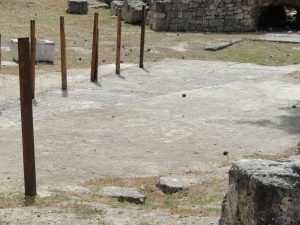 North of the stadium are the cult caves and the theater. 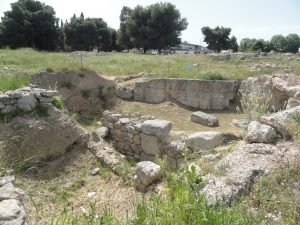 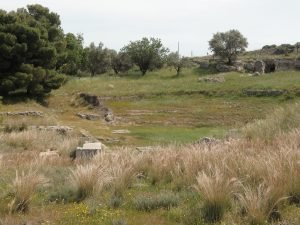 Beyond the theater are the Roman baths. Some of the mosaic floors has been beautifully preserved. 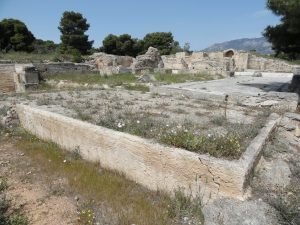 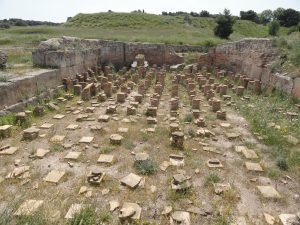 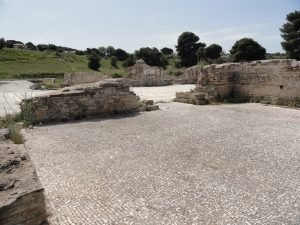 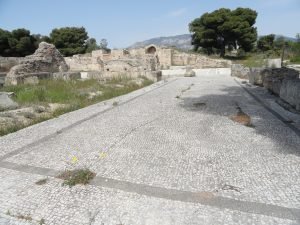 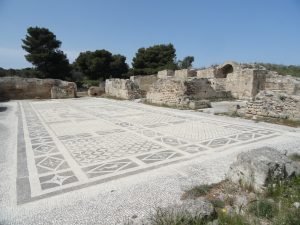 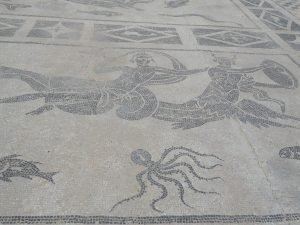 There are some interesting things to see just outside the site as well. If you head down the street on which the site and museum are located heading east, on the left side in several places before the intersection with the highway, you can see the ruins of a stretch of the Hexamilion Wall, or “Six-mile” Wall. The wall was originally built across the isthmus in 480 BCE by the Spartans and other states of the Peloponnese as a defensive strategy to protect the peninsula from the massive army of the Persian King Xerxes, who had already invaded Greece, overrun Leonidas’s 300 Spartans at Thermopylae, and captured a mostly deserted Athens. As it turned out, the Greeks later decided to make their stand in a naval battle in the straits between the Attic coast and the island of Salamis (50 km east of the isthmus) and won, so the Persians never made it to the wall. However, it was maintained and built upon by later generations that found it useful. 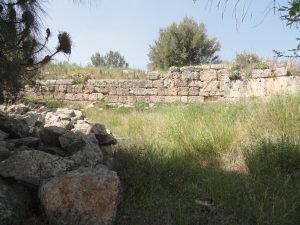 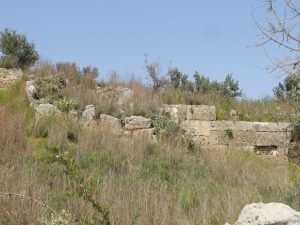 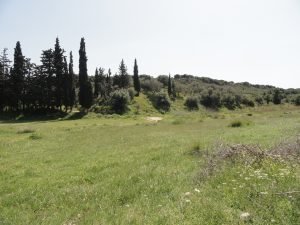 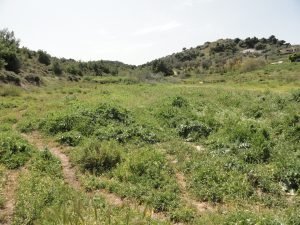 Access to the site is through the museum, which has a large hall full of finds as well as information about the various structures found at the site. 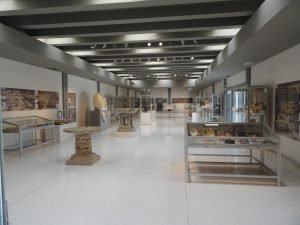 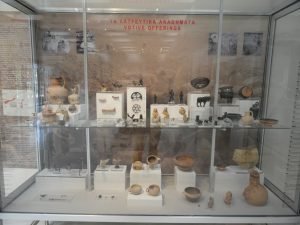 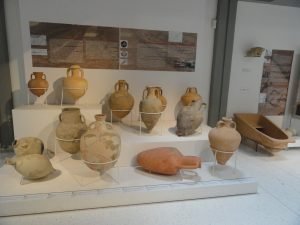 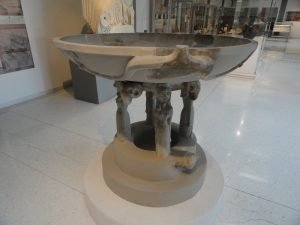 Tips for the Visitor
Coming from Athens, the best way to reach Isthmia is by intercity bus. Buses headed for the Peloponnese depart from the Kifissou bus terminal in Athens and usually after one hour make a stop at the Corinth bus station, which is right next to the canal and just across the highway from the archaeological site of Isthmia. The site is just a 2-km walk or taxi ride south of the station.

If you prefer the train, you can take the train from Athens Station (at the Larissa Station metro stop) or Piraeus to N. Korinthos Station, which is on the Kiato train line and is the same station at which you would disembark to visit Corinth. However, instead of heading west from station as you would to get to Corinth, you need to go east for Isthmia, as the Isthmia archaeological site and museum are a 6-km drive east of the train station. Taxis waiting at the taxi rank in front of the station will take you to Isthmia (or pretty much anywhere else in the area) for a set fare of 10 euro. 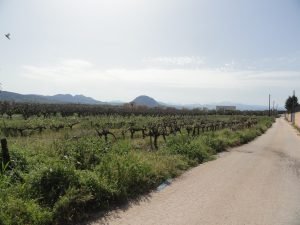 If you are up for a hike, you can walk the distance using the backroads, which will take you through the farms and olive groves in the center of the isthmus. It’s a pleasant and scenic walk in places although not throughout, and it will take you well over an hour each way.

The trains run every hour both ways and cost 9 euro each way.