When the soon-to-be founder of the Turkish Republic, Mustafa Kemal Atatürk, launched his revolution in opposition to the imperial rulers in Istanbul, he chose as his capital a small, insignificant town 350 km east of the capital. The country town was called Ankara, but it was not without its own history.

The site of Ankara was originally settled during the Bronze Age, then later in Hittite times, but it became a city of significance during the rule of the Phrygians, whose capital, Gordion, was just 80 km to the west-southwest. According to the ancient Greek travel writer Pausanias, the city—which he called by its ancient Greek name, Ancyra—was founded by the famous King Midas himself. Alexander the Great captured Ancyra right after taking Gordion, where he had famously “untied” the mystical Gordion knot with his sword.

After changing hands several more times over the centuries, it would eventually become the Roman city of Angora, the capital of the Roman province of Galatia. Both of these names have become well-known in our time as, respectively, the name of a popular breed of cats from the area and in the name of a book from the New Testament containing the text of the letter sent by St. Paul to the early Christians of the region.

Ankara is now a sprawling metropolis (as well as Turkey’s capital), and there is no longer much of the ancients to see there. Today, the main archaeological site on offer features some rockpiles of the old Roman baths of Angora in the old center of the city. 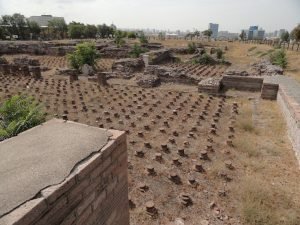 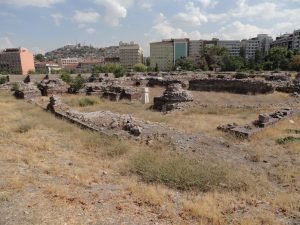