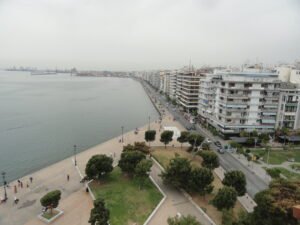 Thessaloniki is Greece’s second-largest city and the main city of the geographic region of Macedonia. It is a thriving international city, a center of culture, a transportation hub of northern Greece, as well as a vibrant university town.

The modern name of the city is the same as that with which it was founded in 315 BCE by Cassander, one of the several Macedonians who carved up the empire of Alexander the Great after the latter’s death in 323. (However, the ancient Greek name is usually transliterated into English as Thessalonike due to transliteration conventions for ancient Greek.) Having secured a kingdom comprising of most of Greece while his rivals took over the larger and wealthier lands of the Near East and Egypt, Cassander named the new city after his wife, who was Alexander’s half-sister. The city quickly became an important urban center of the region and continued to be one after the Romans conquered Macedonia a century and a half later.

The Romans Latinized the name of the city as Thessalonica, and the main ancient ruins that can be found in the city today date from late Roman times. During that period of Late Antiquity–as the power of the command of the empire shifted from Rome to other imperial centers of power such as Mediolanum, Sirmium, Trier, Antioch, and eventually Constantinople–Thessalonica became the most important city in the region of what is now Greece.

Some of the most visible Roman ruins were built by Galerius (who ruled as one of the four tetrarchs during one of the periods in which the Roman empire had multiple emperors) at the beginning of the 4th century CE and can be found in the center of the modern city along Dim. Gounari Street, which leads from the bay-side promenade to the Rotunda. A few blocks from the bay, the street turns into a two-lane pedestrian street with a series of rockpiles to view along the way, some of them in between the lanes. About halfway to the Rotunda from the bay, you can see the ruins of the palace built by Galerius. 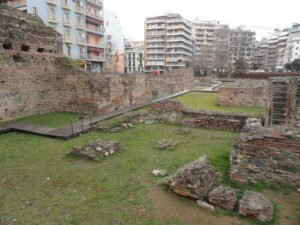 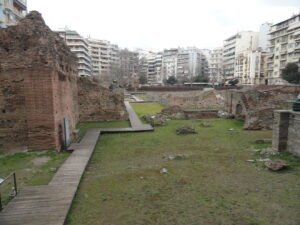 Just before the Rotunda is the Arch of Galerius, which was dedicated in 303 to commemorate a victory over the Persians. It is known to the locals as the Kamara (an ancient Greek word which is defined by Liddell and Scott’s famous lexicon as “anything with an arched cover”) and is today a popular meeting point. The scenes carved into its columns are fine examples of late Roman art. 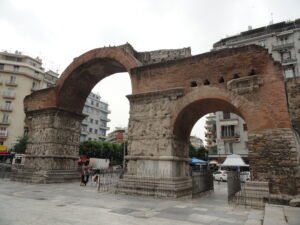 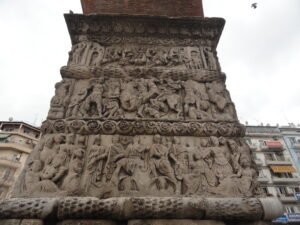 Just beyond the arch stands the Rotunda of Galerius. He may have wanted it to serve as his tomb, but he was not entombed there. Soon afterwards Christianity became the official religion of the empire, and the Rotunda was consecrated as a church. It is the oldest church in the city, and there are still traces of the original mosaics on some parts of the interior. 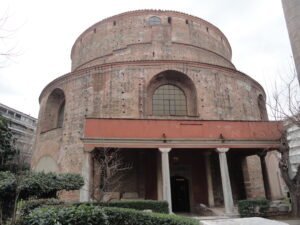 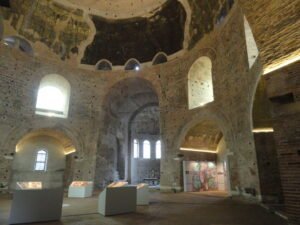 The Roman agora can be found 750 meters northwest of the Rotunda. 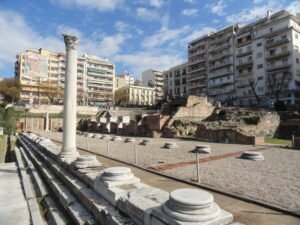 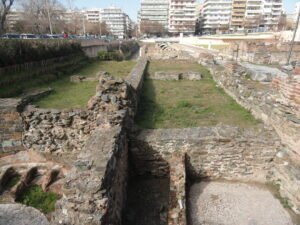 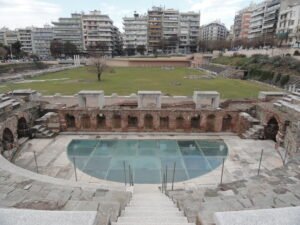 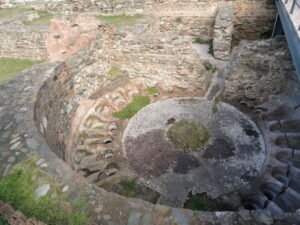 Underneath the agora, there is an underground museum which houses many of the finds discovered there. 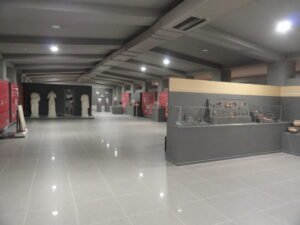 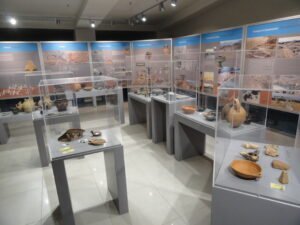 There is another archaeological site a couple blocks northwest of the agora. 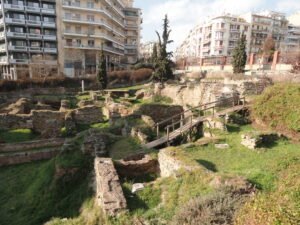 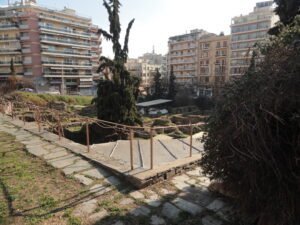 Long sections of the western walls of the city are still intact and can be viewed along one of the avenues a few blocks east of the city’s main train station. 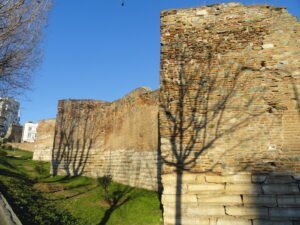 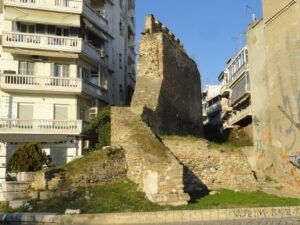 The city’s acropolis was located further inland, to the northeast. Today you will find mostly medieval fortifications there, but some of the walls there date to the late Roman period. 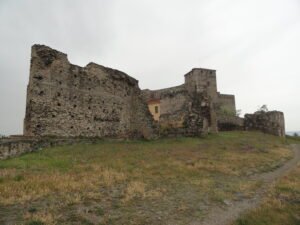 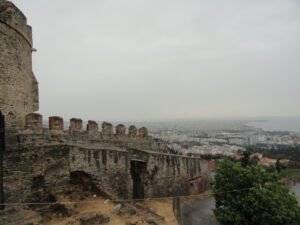 There are some important early Christian sites in the city as well. For example, just one block northeast of the agora stands the Church of St. Demetrios. The present-day church has replaced earlier versions–the first of which was built in the 5th century–but the crypt of the church was part of the ancient Roman bath complex in which St. Demetrios of Thessaloniki, the city’s patron saint, was imprisoned and martyred in 303. On display in the crypt are some statuary from the original church as well as a reliquary believed to contain remains of the saint. 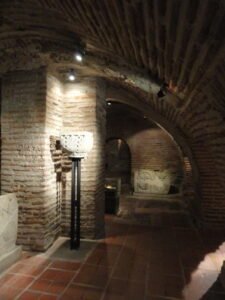 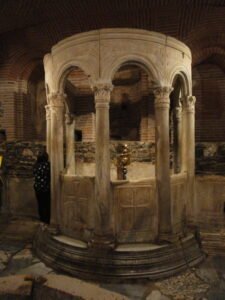 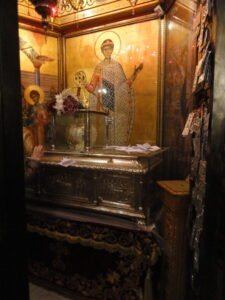 Another splendid church surviving from late antiquity is the Church of the Acheiropoietos, which dates to the middle of the 5th century. It is located about halfway between the agora and the Arch of Galerius. Its architecture resembles many other paleochristian churches, such as the Basilica of Sant’ Apollinare Nuovo and the Basilica of Sant’ Apollinare in Classe in Ravenna. It also bears similarities to the original forms of the Basilica of St. John in Lateran in Rome and the Church of the Hagia Sophia in Constantinople before they were later extensively rebuilt. 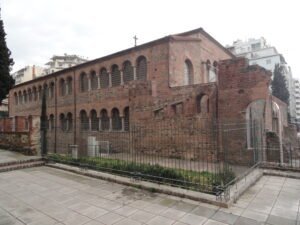 More information and exhibits about the city’s ancient past can be explored at the Archaeological Museum of Thessaloniki. Very close to the museum, on the side of the bay-side promenade, stands a modern statue of history’s most famous Macedonian, Alexander the Great. Just behind the equestrian statue are two rows of long spears attached to shields–a nod to the famous “Macedonian phalanx,” a military tactic pioneered by Alexander’s father which gave Alexander a series of victories against superior numbers on the battlefield. 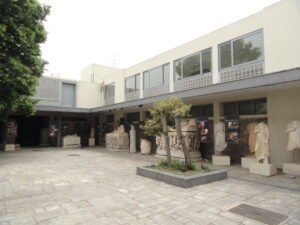 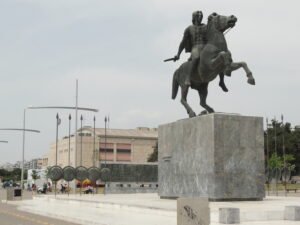 Tips for the Visitor
Thessaloniki is a major transportation hub with connections to other cities in Greece and beyond by land, sea, and air. The city center is relatively compact and is easy to navigate.