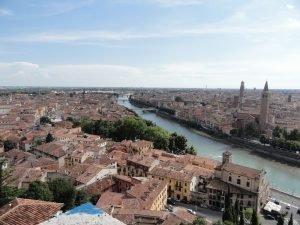 Verona is a beautiful city in the Veneto region of Italy 100 km west of Venice and 140 km east of Milan. The medieval streets and architecture, as well as the city’s having been the setting of Shakespeare’s play Romeo and Juliet, has long made Verona a must-see destination for tourists traveling through Italy.

The city is in fact even older than the medieval aspects for which it is most famous. The area around the city became Roman territory at the beginning of the 3rd century BCE, but the town was not officially designated a Roman town until the 1st century BCE.

The main Roman attraction is the wonderfully preserved amphitheater, which was built in the 1st century CE. It is in such good shape that it is used as a venue for an opera festival every summer. Viewing an operatic performance in a well-preserved ancient Roman amphitheater is a truly spectacular experience. 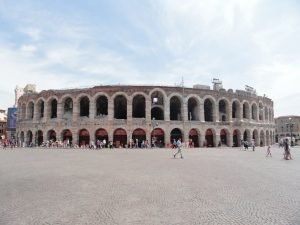 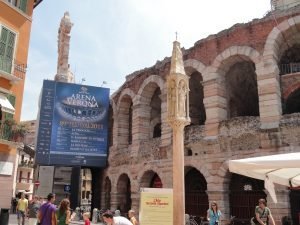 Tips for the Visitor
Getting to Verona by train or bus is very easy. However, if you wish to stay, be aware that hotel prices in the summer are extremely high, even compared to other Italian towns. This is probably because of the opera festival.