The prehistoric archaeological site of Thermi is located on the eastern coast of the Greek island of Lesbos. It is just 10 km up the coast from the island’s main town, Mytilene. It is also within sight of the western coast of Turkey, which is just 20 km to the east across the channel.

The site was discovered in 1928 by the famous British archaeologist Winifred Lamb, who spent the next five years excavating the site. She identified several distinct layers of the site and concluded that some were concurrent with some of the earlier layers of Troy, which was about a 100-km sailing journey to the north, mostly through the protected waters of the Gulf of Edremit.

The settlement started out around 3000 BCE as an unfortified cluster of houses. It expanded and developed fortifications over the course of its use. The site was abandoned in 2400 BCE, only to be resettled by newcomers around 400 years later. There is evidence of Mycenaean culture reaching the site in the late Bronze Age. And as with many other Aegean sites of the same period, the last incarnation of the site was destroyed by fire around 1300 BCE.

The site is very small, and what can be seen there today are mostly the bases of the stone walls of the structures that were built there–mostly houses. 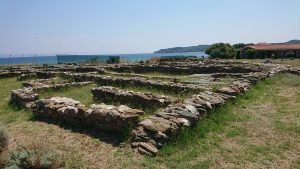 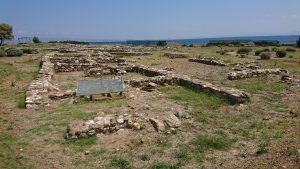 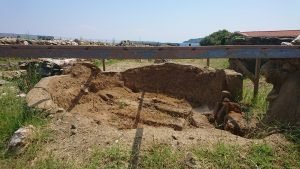 One of the later additions to the site was a pottery kiln, which dates to the 14th century BCE.

At the time when the site was in use, the settlement was located on a small promontory which was flanked by two sandy beaches, which served as harbors. The inhabitants could have easily sailed small boats to the coast of Asia Minor.

A visit to the site begins in the small visitor’s salon, where visitors can view a short but very informative video about the site in Greek or English. The walls of the salon also feature many placards giving information about various aspects and epochs of the site. 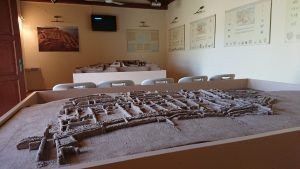 The salon also has a couple of scale models of the site: one showing the site as it is today, and the other reconstructing how it may have looked when it was in use, complete with human figurines carrying out their daily activities. Some Mycenaean bronze weapons found at Thermi can be viewed at the New Archaeological Museum of Mytilene, located in the island’s main town. 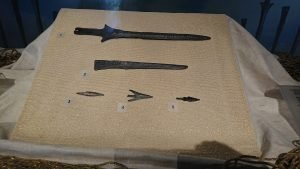 Tips for the Visitor
The site can easily be reached by private car or taxi from the island’s main town, Mytilene. The are also some popular beaches next to the site, so you could easily combine a visit with a trip to the beach.