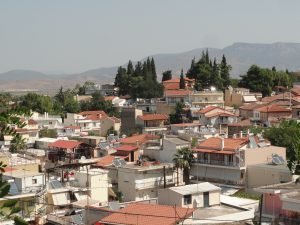 The modern Greek town of Thiva is located in the region of Boeotia 50 km northwest of Athens. It was built over the ancient city of Thebes, and geographically, the size and shape of the central part of town are almost the same as that of the ancient walled city, with the modern boundaries matching very closely with where the ancient walls once stood.

The ancient Greek city of Thebes (not to be confused with the ancient Egyptian city of Thebes) was a very important city not only in the Classical period but also back in the Mycenaean period as well. The Mycenaean citadel located in the center of the modern town (the highest part of town) was called Cadmea. It was named after Cadmus, who according to legend was a Phoenician from Tyre and the brother of Europa who went in search of his sister after she had been abducted by Zeus. Eventually he was told by the oracle at Delphi to follow a cow and build a city wherever it laid down, and that is the story of how he became the founder and first king of Thebes. Like the citadels at Mycenae and Tiryns, the one at Thebes was an important part of Mycenaean civilization.

As an important city in those early years, Thebes was naturally the setting of many myths and stories the ancient Greeks told of their distant past. For instance, it was in Thebes that the tragic Oedipus is said to have become king after he unwittingly killed his father and married his mother (as told in the play Oedipus Rex by Sophocles).

The city was important in the Classical period as well, during which it was a rival of Athens. However, the end of that period brought calamity to the city. The Thebans were defeated by the expanding Macedonians led by Philip II, and their city was completely destroyed by his son Alexander the Great not long afterwards, although it was rebuilt after Alexander’s death.

As the modern town is built over the ancient city, most of ancient Thebes is hidden underneath streets and buildings. However, there are about a dozen places scattered around modern Thebes where you can peek into the city’s distant past.

In the northern part of town, there is a large mound of earth. It housed Mycenaean tombs which were later interpreted as being the tombs of Amphion and Zethos, twin brothers and sons of Zeus. Amphion was credited with building the city’s walls. 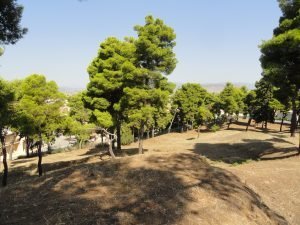 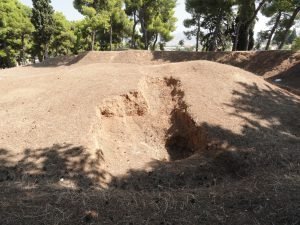 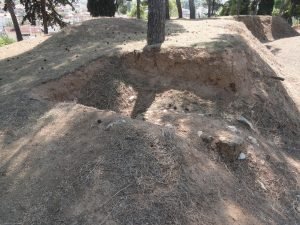 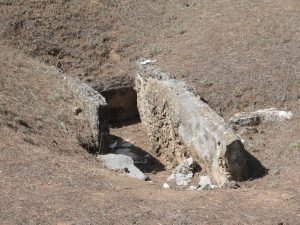 Another similar mound is located in the eastern part of town. Two large cavern-like tombs carved into the rock underneath the soil have been excavated here. 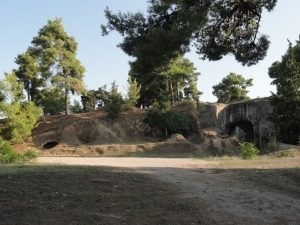 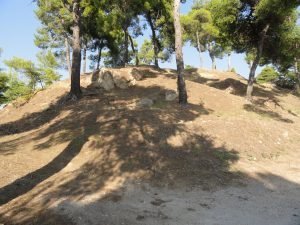 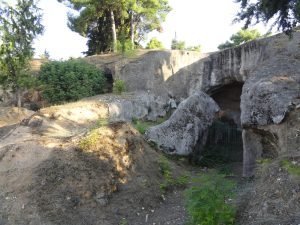 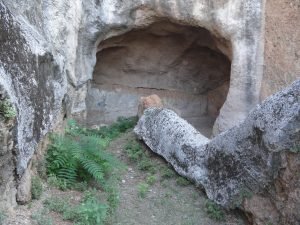 There is a third mound 500 meters directly south of the cavern tombs. On top of it are the ruins of the temple of Ismenian Apollo. It was believed that this was the site of the sanctuary of Apollo which had been burned down by Caanthus after Apollo had abducted his sister, the nymph Melia. In retaliation, Apollo shot and killed Caanthus here. In antiquity, the sanctuary was next to the Ismenos River. The river and the sanctuary were named after the son Apollo is said to have had with Melia. The 2nd-century-CE travel writer Pausanias gives a detailed description of the statuary found there in his time. 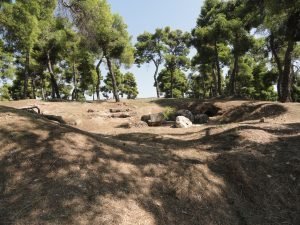 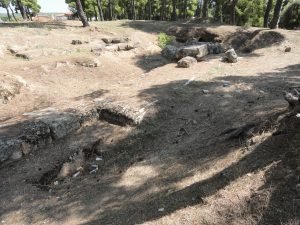 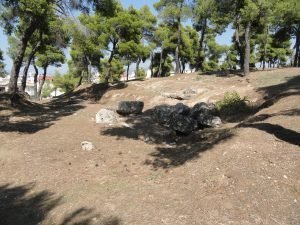 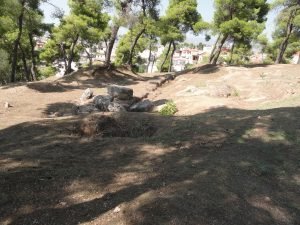 Another site associated with mythical events is the Spring of Dirce, which is on the western edge of town. According to myth, Dirce was the wicked aunt of Antiope, the mother of Amphion and Zethos. The spring here is the spot where her nephews were said to have killed her by tying her to a bull. 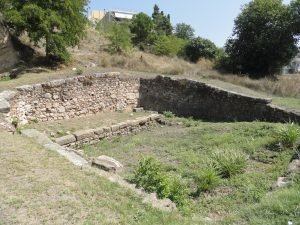 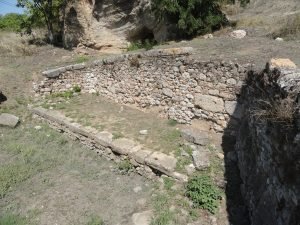 Homer referred to Thebes as “Seven-gated Thebes” as the city did indeed have seven gates. (The moniker was a way of avoiding confusion with Egyptian Thebes, which was called “Hundred-gated Thebes.”) One of the most important gates was the Elektra Gate, the southeastern gate on the road to Athens, which Pausanias says was named after a sister of Cadmus. It was 200 meters northwest of the sanctuary of Apollo, and there are some remains there of the gate as well as of the adjacent fortification wall. 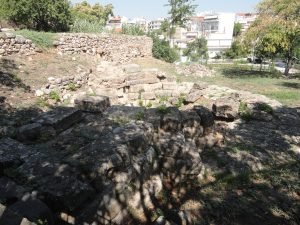 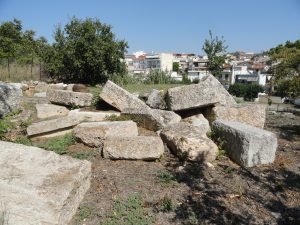 There are also some meager traces of the structures around the eastern gate, which was called the Proitides Gate. 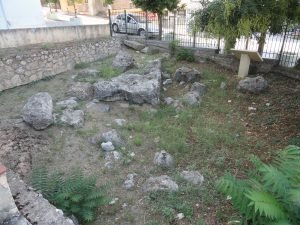 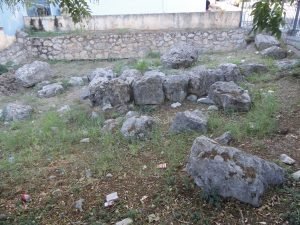 The Mycenaean palace complex occupied the high ground of the town, on which the central part of Thebes now lies. As this is the center of town, only small excavated parts of it are visible today. The main set of ruins of the palace complex can be found right in the center of town at the northwest corner of Pindarou and Antigonis. Not all the ruins here date back to Mycenaean times, though. The larger, better-preserved structures are ancient but much later. 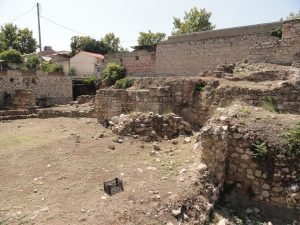 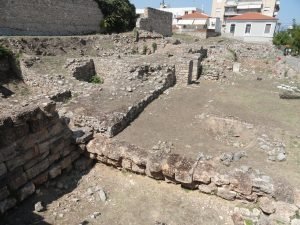 If you wander around the center of Thebes, you can find other excavated patches here and there of various buildings which were part of the ancient palace complex, such as the arsenal, which is just two blocks east of the main set of ruins of the palace. 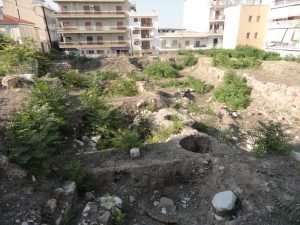 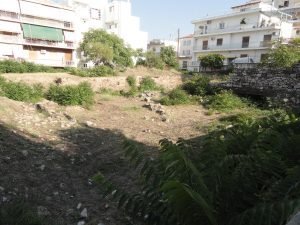 There is also an excavated area underneath the Archaeological Museum of Thebes, which was built over the north end of the ancient palace complex. 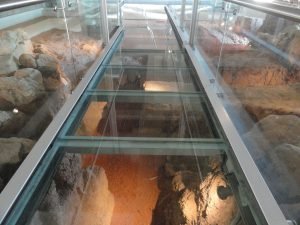 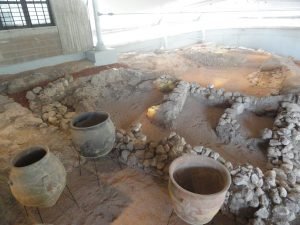 The museum is one of the best in Greece, and it houses important finds from all over Boeotia, including ancient Thebes. Among them are some small gold ornaments which were found in the grave said to be that of Amphion. 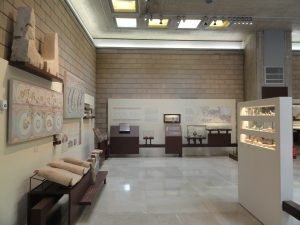 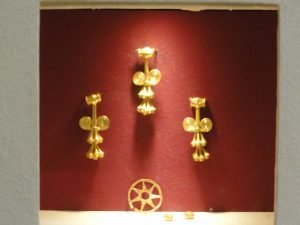 Tips for the Visitor
Thebes is on the rail line connecting Athens and Thessaloniki. It takes just over an hour to get to Thebes from Athens Station. There is also a KTEL bus terminal right next to the sanctuary of Apollo with services to other cities, including Athens.

All of the archaeological sites can be visited any day at any time. Some sites are fenced in, but they can easily be viewed and photographed from beyond the fence. Some sites such as the large mounds have no fences and you can freely walk around the site and among the ruins, although there is quite a lot of litter on them. The only site with limited access is the excavated patch under the museum, whose admission is included with the museum ticket.

As the museum is much bigger than the archaeological museums which are typically found in small towns in Greece, it is open until evenings most days (as opposed to the usual 3 pm closing time of other museums). Admission costs 6 euros.