Taormina is a charming town on the east coast of Sicily in the shadow of a volcano. Its medieval buildings and breathtaking views of the sea and Mt. Etna have made the town a popular destination for decades. It was especially popular among writers and artists of the early and mid-20th century. The authors D.H. Lawrence, Halldor Laxness, and Truman Capote all lived there for a short period, and since the 1950s a local film festival has brought to Taormina some of the biggest movie stars in the world. 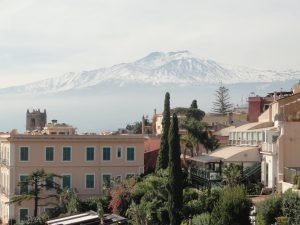 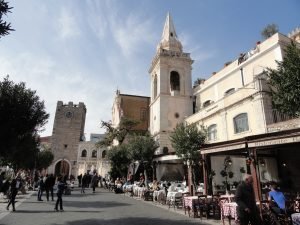 Perhaps the ancient Greeks who first built the town saw a similar type of charm in the location. They called the town Tauromenion, and it was built on top of a hill next to an older Greek settlement called Naxos, which had been established in the 8th century BCE by colonists from the Greek island of the same name. It eventually became the Roman town of Tauromenium. 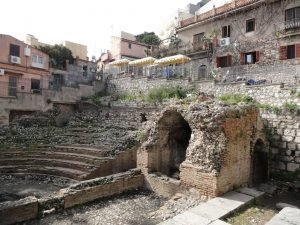 Unfortunately, the only ancient structures here to visit are two theaters. There’s not much left to see of the Roman theater (pictured left) tucked behind the Church of St. Catherine. However, the beauty of the older Greek theater (pictured below) as well as the amazing view from where the audience sat of the sea and Mt. Etna in the background behind the stage make up for the lack of other ancient attractions. The views, of course, come from the fact that the theater is on a hill overlooking the sea and an active volcano, which can often be seen smoking. This makes the theater pretty unique in the world. It’s not surprising that of all the Greek theaters in the Mediterranean, filmmaker Woody Allen chose this one in which to film the Greek theater chorus scenes for his 1995 film Mighty Aphrodite. 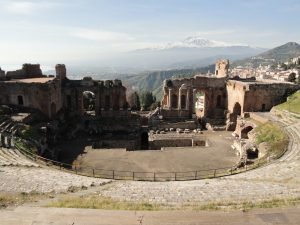 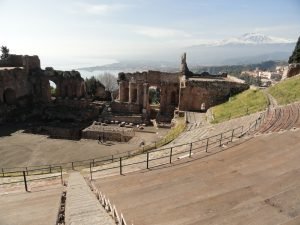 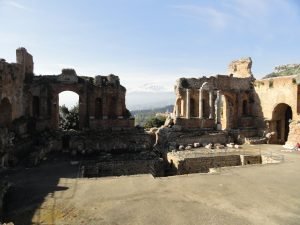 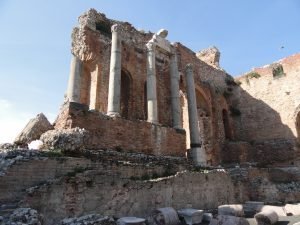 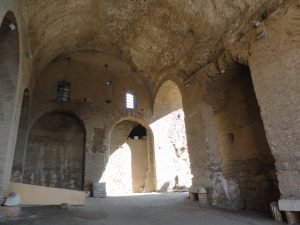 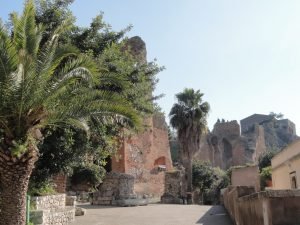 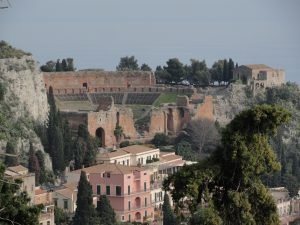 Tips for the Visitor
Taormina is located right on Sicily’s eastern coastal route between (and about equidistant from) two of Sicily’s major cities–Catania and Messina. You can get to Taormina by bus from either town in about 1.5 hours. The trains are a bit faster (the fastest trains from Catania take just 34 minutes), but they will leave you at the Taormina-Giardini train station, from which you need to take a bus or walk up the hill to the town.