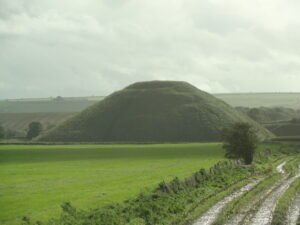 Silbury Hill is a large mound located just 1.5 km south of the stone circles and modern village of Avebury in the county of Wiltshire in South West England. It is a massive mound built in stages around the middle of the 3rd millennium BCE, which is the same period in which Stonehenge was built 24 km to the south.

Standing 40 meters high, it is the largest artificial prehistoric mound in Europe. The top of the mound is flat and is 40 meters across, while the base has a diameter of 160 meters. The hill was made with chalk which was quarried from the area around the base of the mound. Although there have been excavations on the hill, there is no clear understanding of why the mound was built.

Tips for the Visitor
Visiting Silbury Hill is a natural addition to a trip to the spectacular henge monument at Avebury and the prehistoric sites of West Kennet, all of which are within about a 2-km radius of the mound.

The site is managed by English Heritage, which maintains a small, free car park 300 meters west of the site. There is no access to the hill and you can only view it as climbing is prohibited. There are no opening hours or admission fees.