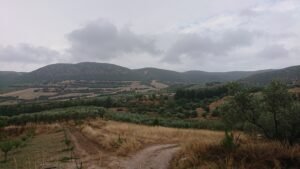 Sesklo is the name of a village located 8 kilometers west of the Greek port city of Volos, nestled in the low hills at the western edge of the Volos plain. On the eastern edge of the village, right at the edge of the hill on which it is situated, is an archaeological site named after the village. It is one of the most important Neolithic sites in the country.

The settlement at Sesklo began around 6500 BCE, in the Early Neolithic period. It expanded during that period and into the Middle Neolithic in the sixth millennium, during which time there were clusters of buildings constructed in the vicinity of the main site. But the Middle Neolithic ended with Sesklo’s destruction, after which the site was abandoned for a few centuries. It was reoccupied during the Late Neolithic period in the fifth millennium, but it seems to have been a more modest settlement than the one which had been destroyed.

Today the site is divided into two parts. The main site at the top of the Kastraki Hill is signposted as ‘Sesklo A’, while excavation of one of the clusters of Middle Neolithic houses 200 meters west-southwest of the hill has been named ‘Sesklo B’. The main site is of course the main attraction, and the top of the hill is covered with traces of the Neolithic structures from all periods which stood there. 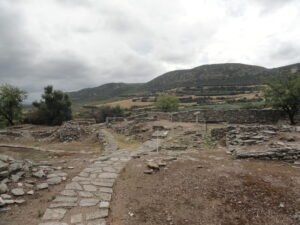 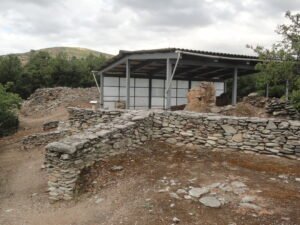 The best-preserved structure — and also the only one under the protection of a canopy — has been dubbed the Potter’s House on account of its identification as a potter’s workshop. This was assumed due to the large number of ceramics which were found in its ruins, fired and preserved by the fire which destroyed the site at the end of the Middle Neolithic. 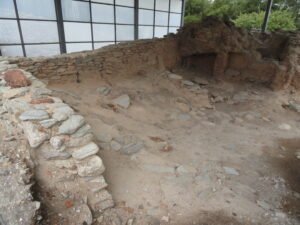 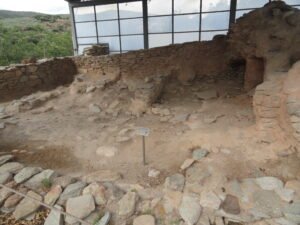 During the Middle Neolithic period, there was also a modest megaron-type in front of the Potter’s House. 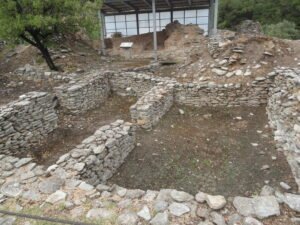 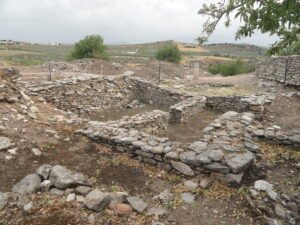 Although the settlement seems to have been much smaller when it was re-established in the Late Neolithic period, the megaron built in this period was much larger than the earlier version, possibly due to a more centralized leadership model. 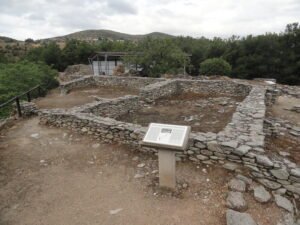 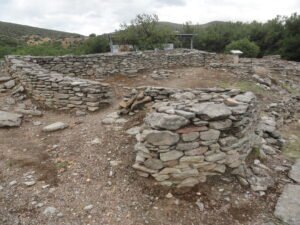 Several one-roomed houses were excavated towards the northern end of the hilltop. 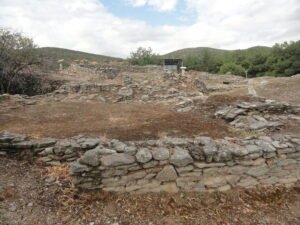 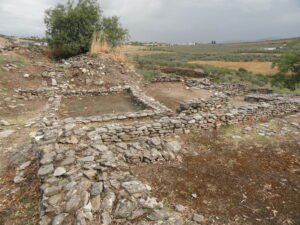 Sesklo B is at the west end of the site. This was one of the clusters of houses which was inhabited simultaneously with but some distance away from the main site on the hill during the Early and Middle Neolithic. However, Sesklo B was not re-inhabited along with Sesklo A in the Late Neolithic. 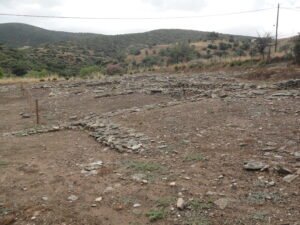 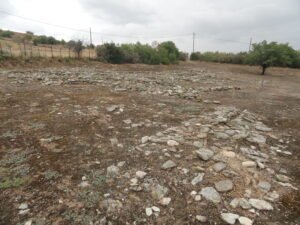 In Volos, next to the beach in front of the Archaeological Museum, there are two reconstructions of Neolithic houses of the kind that existed at sites like Sesklo and Dimini, another important site dating back to the Neolithic period just 4.5 km east of Sesklo. 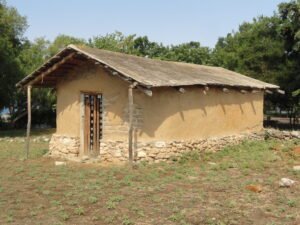 Tips for the Visitor
The regional KTEL bus service has a bus that makes a run to Sesklo (which the bus company sometimes calls Seskoulo) and back from the KTEL bus station in Volos a few times a day. The journey each way takes around 20 minutes and costs 1.60 EUR. If you take the bus there, you might need to wait several hours for the next bus back to Volos. Alternatively, you can set off on a 6-km trek to Dimini.

To get to and from Volos from other cities in Greece from the same bus station, you can get an intercity bus or catch a bus to the airport, which is 30 km away. Alternatively, you can use the nearby train station for one of its regular trains to and from Larissa (around an hour each way), which is on the Athens-Thessaloniki train line.