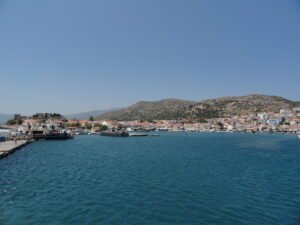 The modern seaside town of Pythagoreio is located on the southeastern coast of the Greek island of Samos about 10 km southwest of the island’s main town, but just 6 km from the Turkish coast across the Mycale Strait, which is only a mile wide at its narrowest point.

At the site where the modern town of Pythagoreio now sits, the main town of ancient Samos flourished in the 6th century BC, especially under the leadership of the tyrant Polycrates, about whom the ancient historian Herodotus wrote extensively in his Histories. It was also the same century in which the famous philosopher and mathematician Pythagoras was born there.

The ancient town was just 5 km east of the Heraion of Samos, a temple and sanctuary complex dedicated to the goddess Hera, which is today considered to have been one of the most important religious sites in the ancient Greek world. Also, due to the island’s close proximity to the coast of Asia Minor, the town was very close to ancient cities whose ruins are now in Turkey, such as Miletus and Priene — both of which were within 35 km.

Today the remains of the various structures associated with the main town of ancient Samos are known as the archaeological site of Pythagoreion, which of course is named after the modern town, which was named after Pythagoras in the 1950s. The most extensive set of the ruins of Pythagoreion are found behind the archaeological museum at the northwestern edge of the modern town. 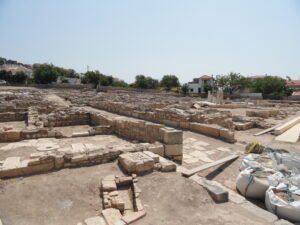 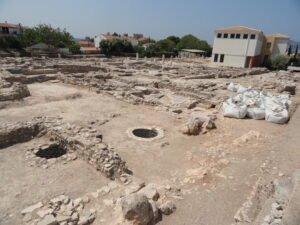 About 650 meters northwest of the museum is what remains of the town’s theater, which was built on the side of the hill rising above the town. The theater has been fitted with some modern seats and appears to be still in use today. Like many theaters in the ancient Greek world built to take advantage of a sloping hill, it had a nice view of the town it served. 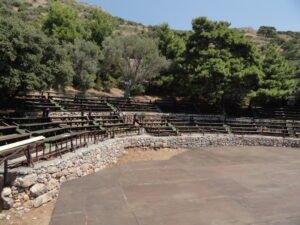 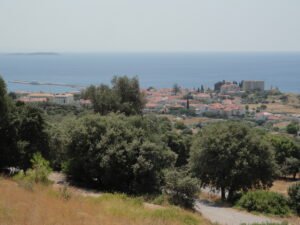 Approximately 750 meters west of the museum and very close to the seashore are the remains of the Roman baths built in the 2nd century CE. 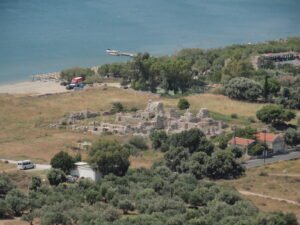 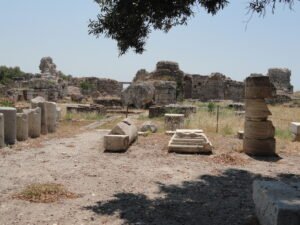 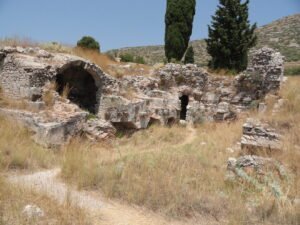 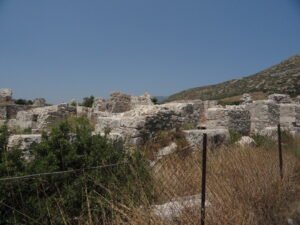 In addition to the museum, another place in town where you can see finds from ancient Samos on display is the Tower of Lykourgos, the ruins of a seaside medieval castle at the southwestern corner of town which was used as a headquarters by Lykourgos Logothetis (a.k.a. Georgios Paplomatas) when he led the Samian forces against the Ottomans during the Greek War of Independence in the 1820s. 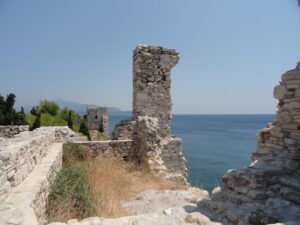 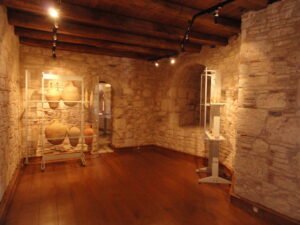 There are some additional archaeological remnants nearby which we were not able to see on our visit. At the top of the hill — beyond the theater and the monastery above it — are remains of ancient fortification structures, part of which make up a fortress which may have served as the palace of Polycrates. Under the hill is the Tunnel of Eupalinos, which was built in the 6th century BCE to serve as the city’s aqueduct and was in use for over a thousand years. The entrance is 450 meters west of the theater, and along with the construction of the mole in the ancient town’s harbor, it is considered a major engineering achievement of the ancient Greek world. Also impressive is of course the earlier-mentioned Heraion, whose remains are today found just 5 km southwest from the town on the other side of the airport. 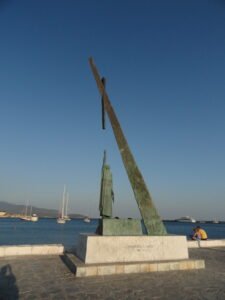 In the town’s harbor, there is a modern statue dedicated to the island’s most famous son, Pythagoras. It depicts him as part of a right triangle, a nod to his Pythagorean theorem, which states that the square of the hypotenuse of a right triangle is equal to the sum of the squares of the other two sides. He is also depicted reaching toward the heavens, possibly a reference to his philosophical ideas regarding the nature of the divine. After all, in addition to his work in mathematics, Pythagoras has long been respected for his work in philosophy, which must have been greatly influenced by his extensive travels around the eastern Mediterranean and also Italy, where he died.

Tips for the Visitor
Pythagoreio is easily accessible by sea, land, and air. Although the main town has a busier ferry port, there are also some ferries which stop at the ancient harbor of Pythagoreio, such as some of those coming from islands to the south. When arriving at the port of the main town, it is easy to get to Pythagoreio by bus or taxi. Also convenient is Samos Aristarchos International Airport, which is less than 3 km west of Pythagoreio.

Samos is also a popular day-trip destination for travelers staying in or near the Turkish resort town of Kuşadası, as the ferry ride between there and the main town of Samos takes an hour and a half each way.