Piraeus is Greece’s fourth-largest city, and it serves as the main port of Athens, located 8 km to the northeast.

The main harbor of Kantharos is located on the west side of the city and is filled with ferries of sizes varying from small catamarans to massive multi-story ships headed for the Greek islands and beyond. In antiquity, this was the main commercial harbor of the Piraeus, and merchants’ stalls lined the southeast edge of the harbor. Today, most of the harbor is surrounded by platforms for loading vehicles and people on and off the many ferries that pass through here every day.

In the Roman period, a massive statue of a lion (carved several centuries earlier, in Classical times) was installed at the entrance of the Kantharos. It was this statue that led Italian sailors in later centuries to call the city Porto Leone (“Lion Port”) until one such sailor decided to take the statue back to his home city of Venice as part of the spoils of war in 1687 (at which time the Venetians were laying siege to Athens during one of their many wars against the Ottoman Empire). The original Lion of Piraeus currently stands in front of the gate to the Arsenal in Venice, and today a copy of it watches over the entrance to the Kantharos from the south side. 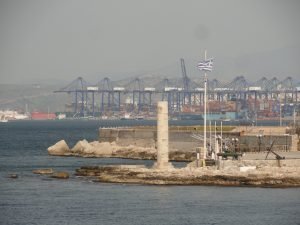 Another monument which is located near the entrance to the Kantharos on the south side is a site which has traditionally been identified as the “Tomb of Themistocles.” Although there is no proof that the bones of the great 5th-century-BCE Athenian admiral-cum-traitor were secretly brought back to Attica and buried in the Piraeus, there are very old stories to that effect. One site which is believed to have been the place where his bones were buried is located at the western-most point of the Akte peninsula, which forms the southern half of the city. There is a small, square-shaped open-air chamber with a stone sarcophagus inside it and a single plain column standing next to it. (There is also another candidate for the tomb of Themistocles on the opposite side of the entrance to the Kantharos.) Today the site is on the grounds of a naval installation and therefore off-limits, but a glimpse of it can be seen from the sea walls to the south.

On the opposite side of the Akte peninsula from the Katharos is another harbor called the Pasalimani (“Pasha’s Harbor”), which is also called the Zea harbor as it was in Classical times. In those days, this was the main military harbor of the great Athenian naval fleet of triremes which Themistocles had convinced his fellow Athenians to build with the wealth the city was acquiring through its silver mining operations in Laurion. 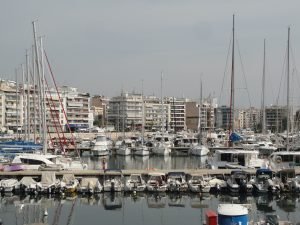 Today the Pasalimani/Zea is encircled by a wide pavement that makes for a pleasant place to take a stroll and admire the countless sailboats and yachts clogging the harbor. In Classical Piraeus, the harbor was surrounded by nearly 200 shipsheds which housed the drydocked triremes of the Athenian fleet. The foundations of three of these shipsheds on the east side of the harbor can be viewed through the windows of the ground floor of the building at the northeast corner of the boulevard that circles the harbor and Siraggeiou Street. 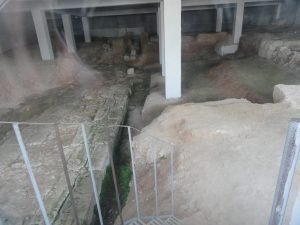 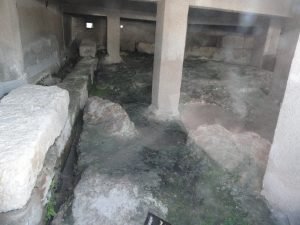 Also connected to the ancient Athenian navy was a long building which was just north of the Zea. This was the massive arsenal designed by the architect Philon, and it was here that the equipment needed for the fleet such as ropes and sails was stored. Today only a small section of the remains of the arsenal is visible, which can be viewed from either Ipsilantou Street (left photo) or Kountouriotou Street (right photo) just south of Mpoumpoulinas Street. There is a gate on Ipsilantou Street giving access to the site and a path inside as well as an information signboard, but the gate does not appear to ever be open. 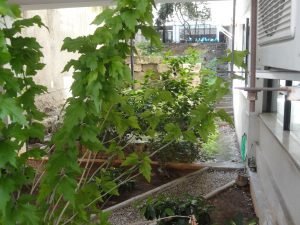 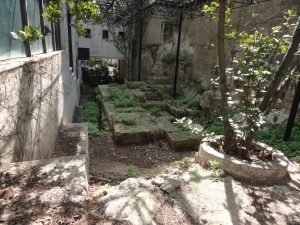 There is another harbor northeast of the Pasalimani/Zea called the Mikrolimani (“Little Harbor”). In ancient times it was called the harbor of Mounychia, which was the name of a nearby hill which is today called Kastella. The Mounychia was also a military harbor in Classical times, although it had less than half the number of shipsheds as did the Zea. Like the Pasalimani, the Mikrolimani is also used today as a marina, mostly for sailboats. However, instead of having a wide pavement where the shipsheds once stood, there is a ring of restaurants and cafes with dining rooms extending right up to the water’s edge. 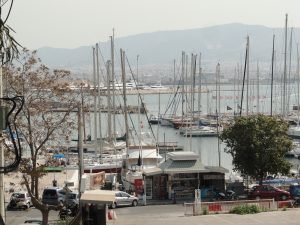 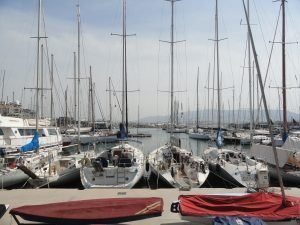 However, the easiest parts of ancient Piraeus to spot are the ancient walls and gates. Although the walls and fortifications which had been built at the urging of Themistocles were destroyed by the Spartans after claiming victory at the end of the Peloponnesian War, the walls which were built by the general Konon a few decades later survived for a long time after their construction in the early 4th century BCE. The remains of Konon’s walls can be seen in many parts of Piraeus, such as in and around the small harbor on the western edge of town where the Cross of Piraeus monument is located. 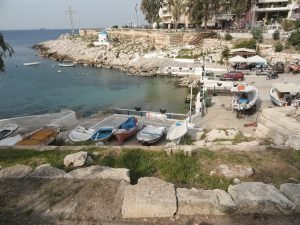 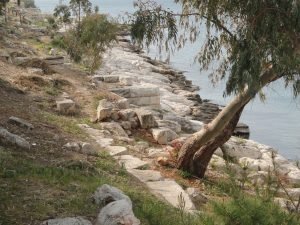 Piraeus had a pair of gates on its north side called the Asty Gates. One was between the two parallel Long Walls which connected Athens and its port, and the other was right next to it but giving access to the port to those coming from the west but outside the Long Walls. Remains of the gates as well as some sections of the adjacent walls can be viewed in the neighborhood which is 500 meters due east of Piraeus Metro Station. 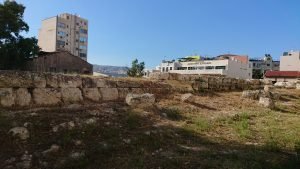 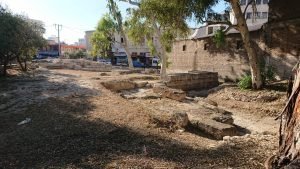 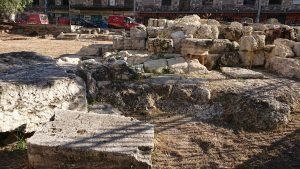 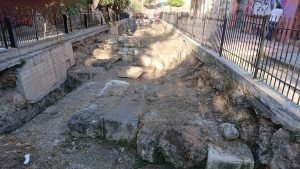 There was another gate on the northwest side of the Kantharos, and the walls there protected the harbor from land approaches from the west. This was the Eetonian Gate, and today there is an archaeological site there which appears to be designed to accept visitors. It has a ticket kiosk, footpaths, and information signboards, but it appears to be closed indefinitely. You can still view it from outside the gate and from the roads which surround it. 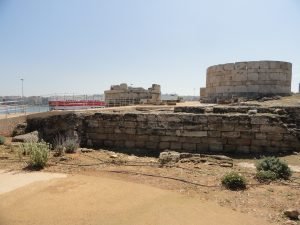 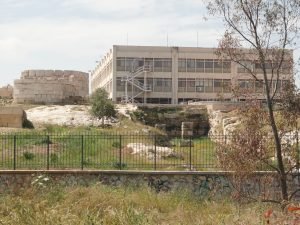 Not much more of ancient Piraeus can be seen in town as the old city has been almost entirely built over. There are a few spots around town where you can get a peek at the foundations of some of the ancient buildings. The easiest places to view such rockpiles are two fenced-off blocks just a couple blocks from each other located in the stretch of town which lies directly in between the Katharos and Zea harbors. These archaeological sites are named after the squares where they are located: Rondiri Square (left photo) and Terpsithea Square (right photo). 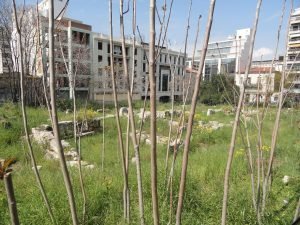 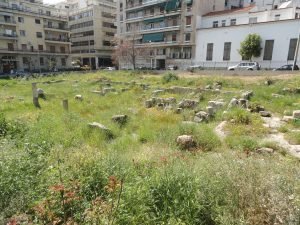 You can also see what is left of a theater dating to the 2nd century BCE on the grounds of the Archaeological Museum of Piraeus, which is just a couple of blocks west of the Zea. 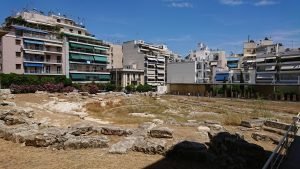 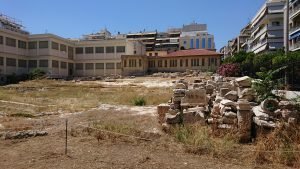 The museum also displays many interesting artifacts from in and around Piraeus, both inside the building and out. 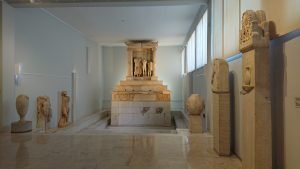 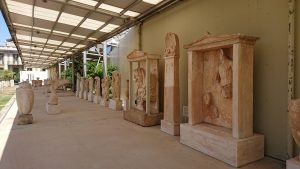 If you are still trying to imagine the warships of the military harbors, keep an eye out for two of the museum’s most interesting and unique exhibits: a marble eye which once decorated the side of a trireme, and a bronze prow ram that was once fixed to the front of a trireme to sink enemy ships. 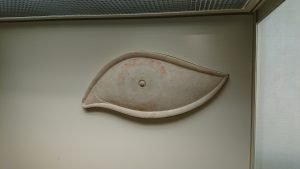 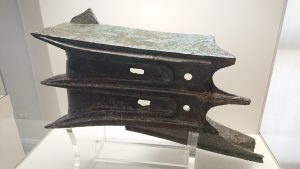 Another interesting museum in the vicinity of the Zea is the Hellenic Maritime Museum. It houses exhibits covering all epochs of Greek naval history right up to modern times, including models of the shipsheds and triremes that crowded the Zea harbor in antiquity. The museum even has its very own rockpile, which includes both remains of the walls built by Konon in the 4th century BCE as well as traces of the earlier walls built by Themistocles in the previous century, which did not survive the century as the defenses of the Athenians were razed by the Spartans following the victory of the latter over the former at the end of the Peloponnesian War. 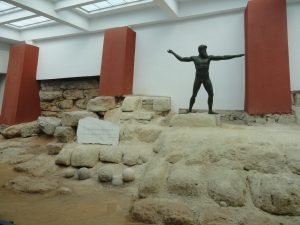 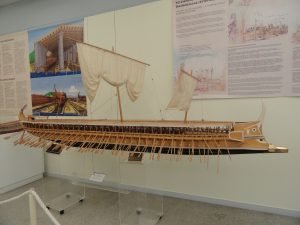 Tips for the Visitor
From central Athens, the quickest and easiest way to get to Piraeus is to take the commuter train which serves as the green line of the Athens Metro to Piraeus Station, which is the terminal station at the southwestern end of that line. Piraeus Station is right at the northeastern corner of the Kantharos harbor.

Depending on where in Athens you are coming from and which part of Piraeus you are interested in seeing, it may be more convenient to take one of the many bus lines that connect various parts of both cities. You can also use the many bus options in Piraeus to get around the city. Piraeus is part of the same public transport system as Athens, so you can use the same transport tickets inside and between both cities without needing to pay any supplements.

The archaeological remains featured in this article can be viewed at any time of day except for those which are on the grounds of the two museums mentioned above.