Phaselis was one of the many ancient Lycian Greek cities found today to the west of the Turkish city of Antalya. It was founded by colonists from the island of Rhodes in the 7th century BCE. In the 4th century BCE, Alexander the Great occupied the city shortly after his successful siege of Halicarnassus before heading east to take Perge. The ruins of Phaselis are now found just 16 km north of those of Olympos, another city of the Lycian League.

Part of the charm of the ruins of Phaselis is that they are spread out very close to the sea. At the north area of the site, the remains of the necropolis are so close to the sea that some of the ruined empty sarcophagi are literally falling onto the beach from the top of the ridge on which the necropolis was built. The beach is a popular swimming area for locals and tourists alike. 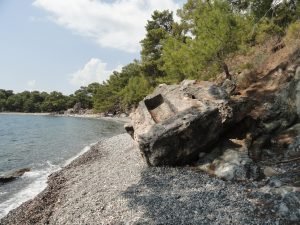 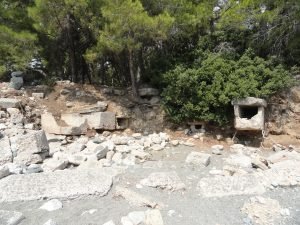 More crumbling tombs and sarcophagi can be found in a short trek through the seaside wooded area just north of the beach. 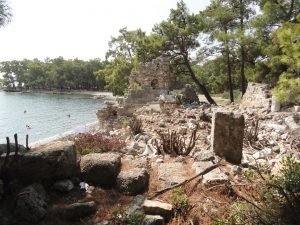 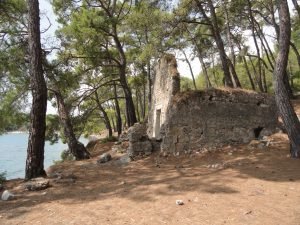 Immediately south of the beach, on the other side of the parking lot, are the ruins of the city itself. The main ancient thoroughfare leads from one side of the neck peninsula to another, both of which in ancient times had harbors. The ancient avenue today is shaded by massive pine trees. There are several ancient buildings lining the avenue that can be visited, such as the city’s baths. 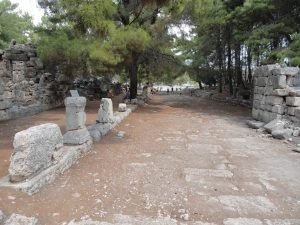 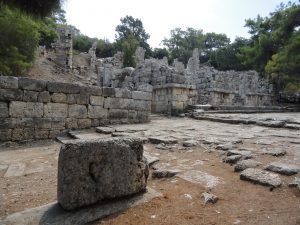 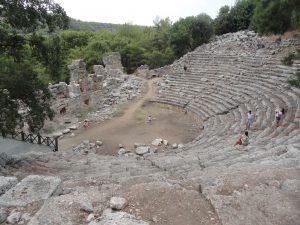 The main attraction is the ancient theater.

Tips for the Visitor
Most of the minibuses which run along the highway between Antalya and Olympos stop at Phaselis. However, from the Phaselis bus stop on the highway, the site itself is a two-kilometer walk along the dirt road heading east towards the sea. Note that longer-distance buses from Antalya such as the ones heading for Kaş do not normally stop at Phaselis.