Perge (also called Perga, but not to be confused with Pergamon) is an archaeological site located in the municipality of Aksu in the Turkish province of Antalya, just 10 km east of the city of Antalya.

Perge is mostly known as a Greek and later Roman city with non-Greek origins. (It may have been the Hittite city of Parha.) Alexander the Great took the city without a fight in 334 BCE after his occupation Phaselis before moving east to Side. It was later the hometown of the Greek mathematician Apollonius, who defined the conical sections ellipse, parabola, and hyperbola. According to the Bible, St. Paul and St. Barnabus preached there.

However, almost all the ruins we see there today are from the Roman period. During those years, Perge was the capital of the Roman province of Pamphylia Secunda. Athough the ruins are not as old as some ancient Greek cities, they are very extensive and relatively well preserved, making the present-day site of Perge comparable to Ephesus on the west coast of Turkey.

The entrance is at the south end of the site. Upon approaching it, you can see on the left the exterior of the theater, which is across the street and is not part of the site as it has been closed to the public for years. 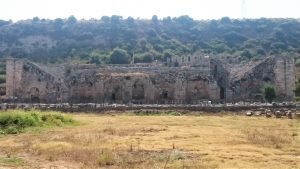 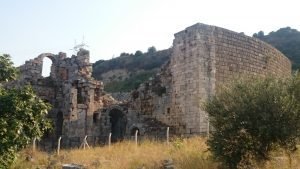 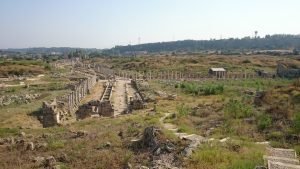 The site is mainly laid out along two ancient thoroughfares–one leading to the north, and the other leading from the west towards the northern end of the first one. You can get a bird’s-eye view of the site from the hill at the north end of the site.

As can be seen from the view from the hill, the columns lining the main avenues of the ancient city are for the most part still standing. 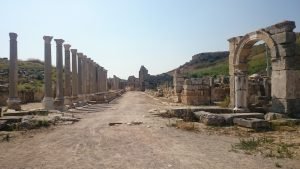 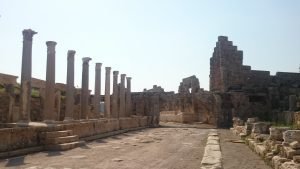 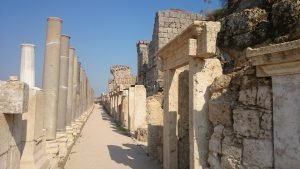 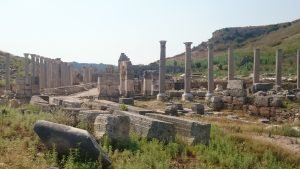 There are many impressive structures to be seen along the column-lined avenues. 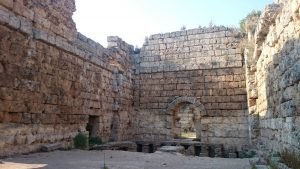 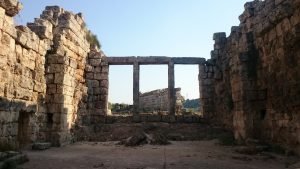 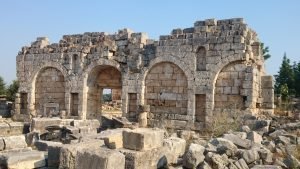 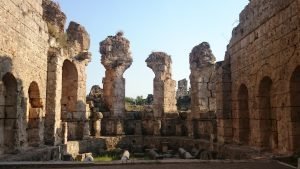 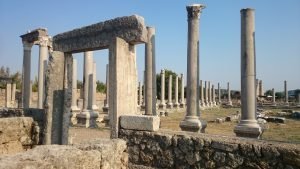 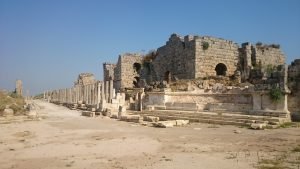 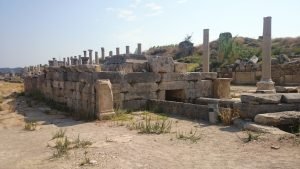 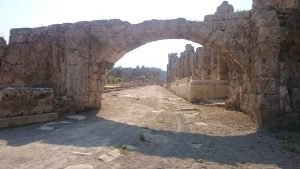 The most photographed building at Perge is probably the nymphaeum, which had a channel of water running through the center of the street leading up to it. 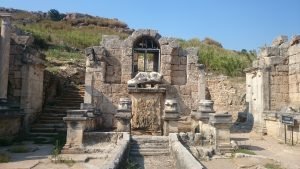 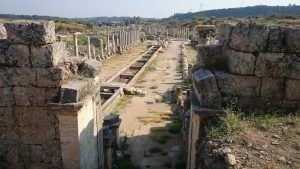 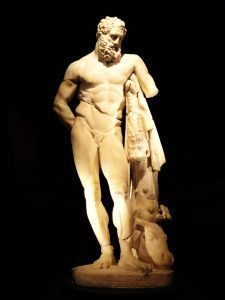 The Antalya Museum is located in central Antalya about a 25-km drive from the site. It is a superb modern archaeological museum with an incredible collection of statues, mostly from Perge. If you are curious to see what kind of statues were found at the site, be sure to visit the museum.

The most prominently displayed statue is the Weary Heracles statue (pictured left). It a copy of the same older Greek statue of which the Farnese Hercules is a copy. The statue was found broken at Perge in the 1980s, but the top half was smuggled out of the country and ended up on display at the Museum of Fine Arts in Boston until it was returned to Turkey in 2011. The statue was then reassembled and has been on display at the museum since 2014.

In addition to the famous Heracles statue, there are countless other statues from Perge cluttering the many halls and rooms of the museum. 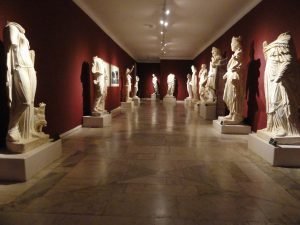 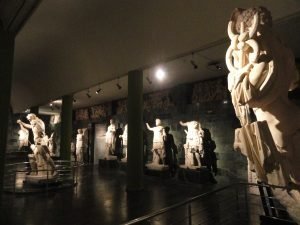 Other finds from Perge are also on display there. 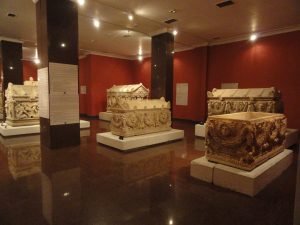 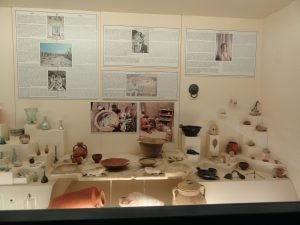 Tips for the Visitor
Perge is only a 10-minute cab ride from Antalya International Airport. If you are already in town, you can catch a bus to the town of Aksu (which is right on the highway which heads east out of the city along the coast), and the entrance to the site is only a 1-km walk north from the highway. A taxi ride from central Antalya would take about a half hour if there is no traffic.