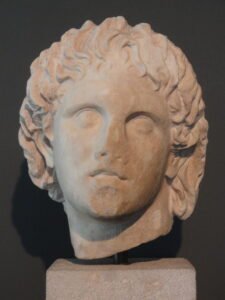 The ruins of ancient Pella are located on the western and southwestern outskirts of the modern town of the same name, which is 40 km west of Thessaloniki, Greece’s second-largest city. Although today Pella is 30 km inland, in antiquity is was on the coast. The city first gained significance when King Archelaus I moved the capital of his Kingdom of Macedonia there at the end of the 5th century BCE. Half a century later, Macedonia’s most famous king–Alexander the Great–was born in the royal palace at Pella. The city continued to prosper during the Hellenistic period, but after resisting the Romans, it was sacked in the mid-2nd century BCE. The Romans ended up re-establishing Pella as a Roman town, but it never recovered the grandeur and wealth it had enjoyed under Macedonian rule.

On the southwest side of the modern town is the main site, at the north end of which lies the large open space that was Pella’s agora. It is surrounded by what is left of shops and other structures. The streets and structures of the well-planned city were organized in straight lines forming rectangular blocks with the agora at its center. 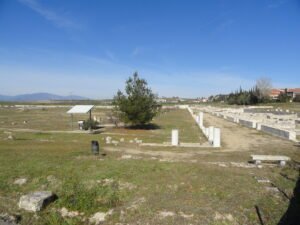 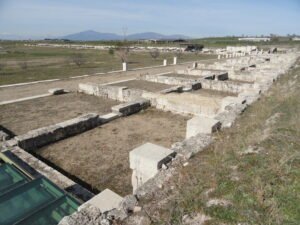 Just north of the agora is the Sanctuary of the Mother of the Gods and Aphrodite. 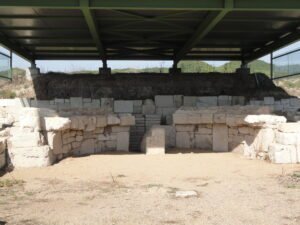 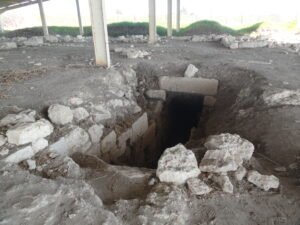 South of the agora are some houses, including some luxurious ones such as the so-called Dionysus House, which featured colonnades and a pavement with pebble mosaics. 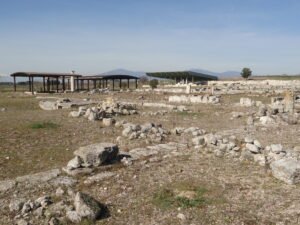 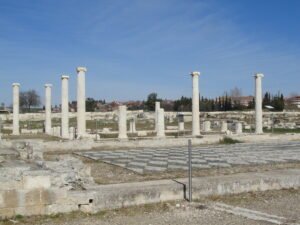 At the southern end of the site are some other structures, including a pottery workshop. 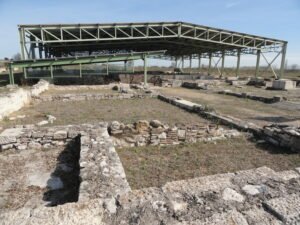 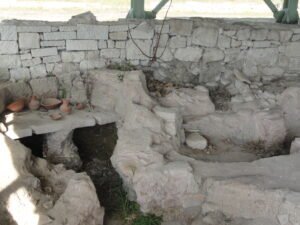 At the southwest corner of the site is a road which led from the agora down to the port. 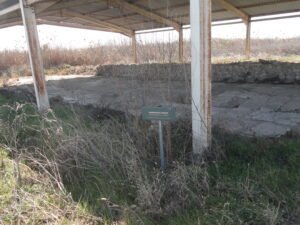 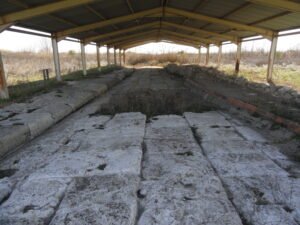 If you leave the site and head east, you can find some traces of Pella’s eastern necropolis as well as a multi-chambered tomb which was not open to the public at the time of our visit. 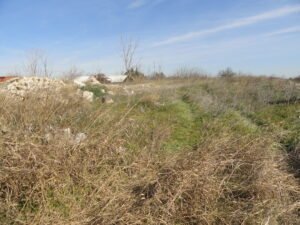 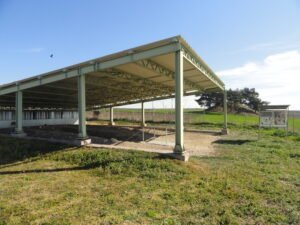 On an elevated plain 1 km north of the agora lie the ruins of the royal palace. It was not open to the public at the time of our visit due to excavation and construction works, but we were able to catch some glimpses of what is left of it from the road that runs along its north edge. 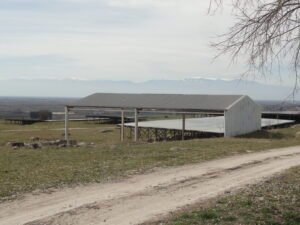 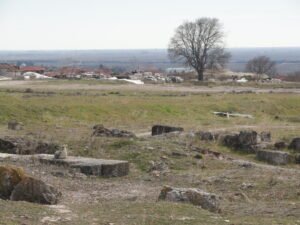 Between the palace and the agora–right at the western edge of the modern town–is a large, impressive archaeological museum featuring many finds from Pella and beyond. Here you can see some of the pebble mosaics from the houses of the well-to-do, including the Dionysus House. 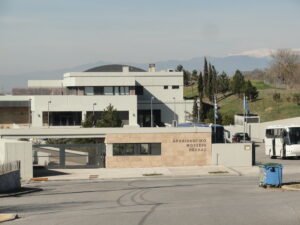 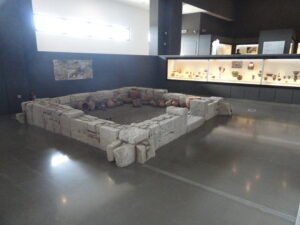 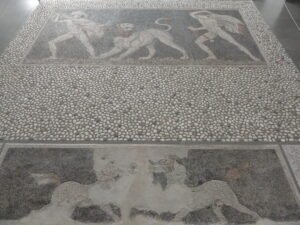 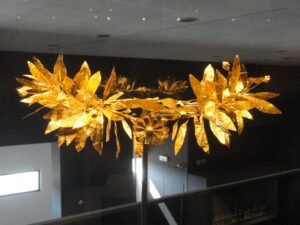 Another interesting place is the ancient fountain in the middle of town. 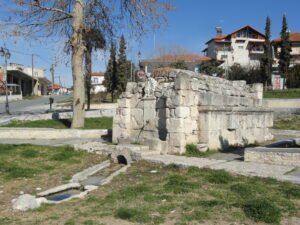 Tips for the Visitor
Doing a half-day trip to Pella from Thessaloniki is easy, even if you don’t have your own vehicle. The KTEL intercity bus terminal 2.5 km west of the main train station in Thessaloniki has regular buses throughout the day that stop at Pella. The journey takes 40 minutes and costs under 5 euro each way. The bus will drop you off at a bus stop just off of the highway, and from there you can walk down the road heading west 1 km to reach the entrance to the main archaeological site or the road heading north 1 km to get to the town. Check the bus schedule to find out when the buses return to Thessaloniki and wait for the bus at your chosen time at the same stop at which you were dropped off.