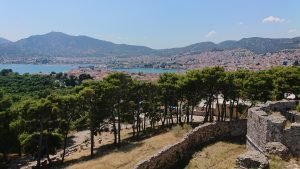 Mytilene is the main town of the Greek island of Lesbos, the third-largest of the Greek islands. The town is also the capital of the North Aegean region of Greece. Mytilene is located on the coast in the southeast part of the island. From the town, you can easily see the Turkish coast, which is just 20 km across the strait.

Mytilene has had a long history. Many of the most prominent landmarks are buildings which survive from Ottoman times, such as the castle which was originally built by the Byzantines but later used by the Ottomans after they captured the island in the 15th century. 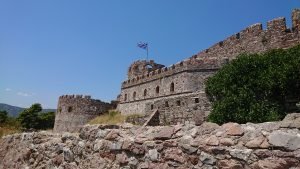 However, the town is even older than those medieval buildings–much older. It was an important city in antiquity, and it was home to many important figures from ancient Greek history. The poet Sappho and the philosopher Theophrastus–both of whom were born in the western part of the island–lived there, as did Theophrastus’ friend and fellow philosopher Aristotle for a short time. Also, Mytilene was the hometown of the poet Alcaeus as well as Pittacus, one of the Seven Sages of Greece.

There had been a prehistoric settlement just 10 km north of Mytilene at Thermi, but that site had been abandoned before the founding of Mytilene. However, Mytilene was concurrent with several other city-states on the island of Lesvos.

Today, the eastern part of the town–which is dominated by the castle–sits on a promontory, but in ancient times it was originally a small islet which was eventually joined together with the mainland. This is where the ancient city’s acropolis once stood, and some remnants of the ancient town have been found within the grounds of the castle. 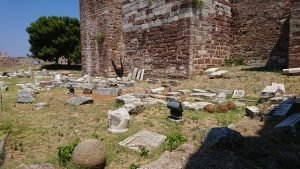 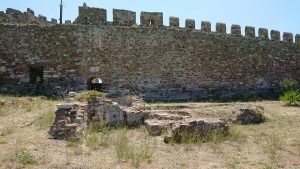 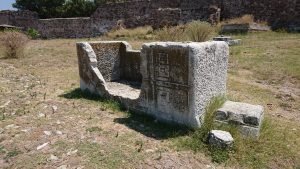 Just north of the castle are the excavated remains of a 150-meter-long commercial stoa dating to Hellenistic times. 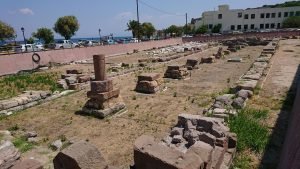 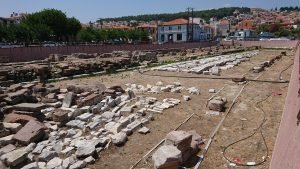 At its western end, the town rises up the slope of a hill. At the top of the hill is where the town’s Hellenistic theater was located. Built in the 2nd century BCE, it was admired by the Roman general Pompey Magnus when he came to the town the following century. It is believed that Pompey used Mytilene’s theater as a model for Roman theaters built afterwards in Italy. 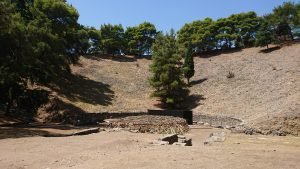 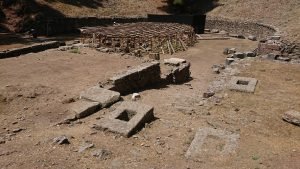 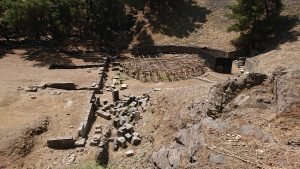 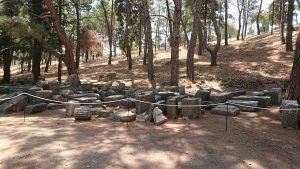 There are two archaeological museums in Mytilene–an ‘Old Archaeological Museum’ and a ‘New Archaeological Museum’. At the time of our visit, the old museum was closed indefinitely, but there were many interesting things from ancient Mytilene to see in the new museum. The most striking displays are the mosaic floors from some of the houses excavated in different parts of the town. There are also many artifacts to see there. 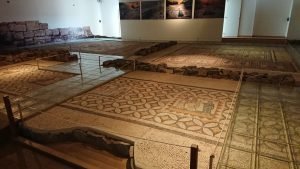 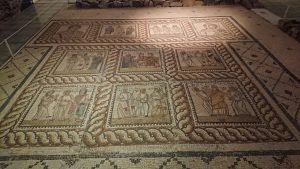 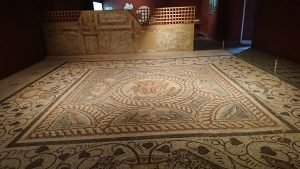 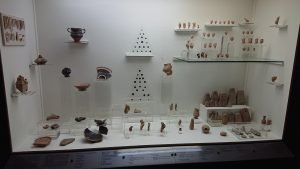 Tips for the Visitor
As the main town and transportation hub of the island, Mytilene can be reached by ferry from other islands in Greece as well as the mainland ports of Piraeus (near Athens) and Kavala (in the north). There are also ferries to the Turkish coastal towns of Ayvalik and Dikili, which take an hour or less. Mytilene also has an airport.