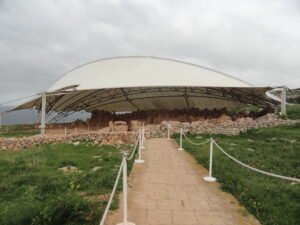 The Neolithic temple site at Mnajdra is located in the same archaeological park in Malta as Ħaġar Qim. The oldest parts of both sites — just 500 meters apart — date back to the 4th millennium BCE.

The temple complex at Mnajdra is made up of three buildings. The two largest are called the South Temple and the Central Temple, which are next to each other, and each consists of what now look like two oval-shaped enclosures, although some of these enclosures were further subdivided into separate spaces. The other building has only one oval-shaped enclosure.

The South Temple is entered through a gateway flanked by uprights slabs of stone and covered by another slab, which is typical for Neolithic Maltese temples. As those who used the site crossed through the first enclosure, they would find the entrance to the second one right in front of them. In the back of the rear enclosure was a niche which most likely served a ceremonial purpose. 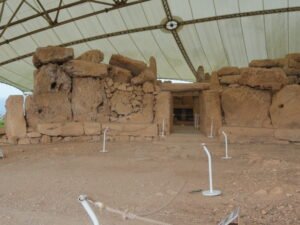 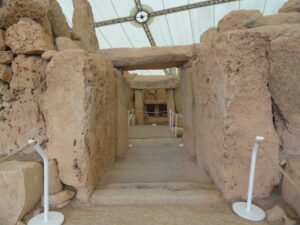 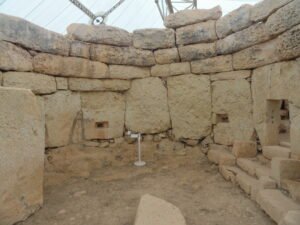 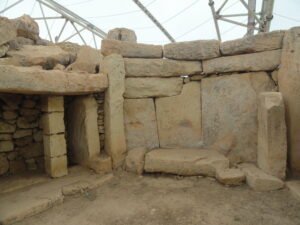 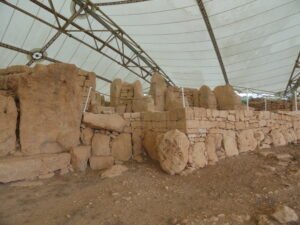 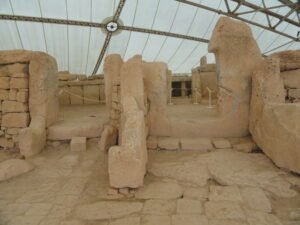 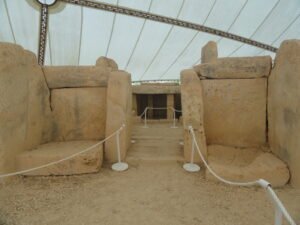 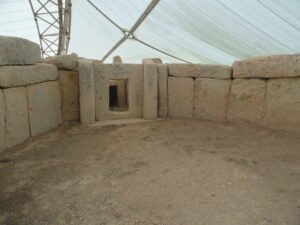 The third, smaller structure with its single enclosure with a niche in the back of it is on the other side of the Central Temple. 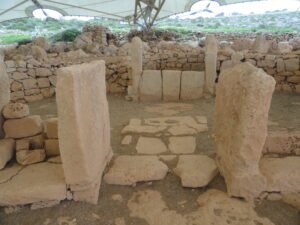 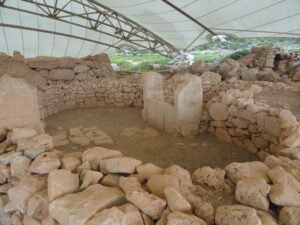 You can find a model of the site in the visitor’s center. This is helpful for making sense of how the temples are shaped and arranged, as this is very difficult to make out when walking through the maze of chambers inside the temples. Also useful — not to mention fascinating — is the feature of the model which allows you to see how the sunlight enters the gateway to the South Temple on certain days of the year, which was clearly planned by the builders. As is shown by the red lines in the photo below, the entrance to the South Temple is aligned with the sunrises on both equinoxes, while the sunrises on the solstices beam in a stream of light at an angle which illuminates decorated panels inside the first chamber. 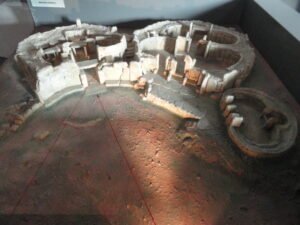 Tips for the Visitor
The temple sites of Mnajdra and Ħaġar Qim are located in an area which is both an archaeological park and a nature preserve with walking trails. You don’t need a ticket to walk around the park or hike along the trails, but you will need a ticket to visit the two temple sites (which are both fenced in, each with its own ticket booth) and also the small museum in the visitor’s center (which also features a cinematic salon presenting a short but impressive 3D video presentation). The ticket sold in the visitor’s center covers all three, and the regular price is 10 EUR.

The park is located a little over a kilometer southwest of the the town of Qrendi. There is a bus stop (Hagar) right by the entrance driveway to the visitor’s center. One of the buses that stop there (74) sets off from the main bus terminal just outside the city walls of Valletta, and the journey from there to Ħaġar Qim takes around 40 minutes. There is also another bus that passes by (201) which runs between the town of Rabat and Malta International Airport. Note that these buses can be infrequent (once per hour at the time of our last visit), so check the timetables in advance if you are planning to go by bus. Another option is to take a taxi, which you can book by phone in advance at a set price, which may vary depending on the time, day, and location.