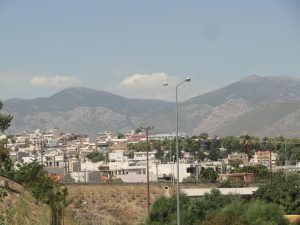 The town of Megara is located in West Attica about 35 km west of the Greek capital of Athens. It may look like just a sleepy provincial town, but it has a long history. It was once the center of an ancient Greek city-state, and its territory (Megaris) was the state between Athens and Corinth. Over the centuries, it was subservient to or allied with several different cities–Athens, Sparta, Corinth, and eventually Rome. The Romans destroyed the city in 45 BCE, but the city was later revitalized. Ancient Megara met its end when it was destroyed by the Visigoth chieftain Alaric I at the end of the 4th century CE.

In their earliest history, Megarans had set up colonies abroad, such as Megara Hyblaea on the eastern coast of Sicily. Their most successful colony was Byzantium, which was established by the legendary Byzas at the southern end of the Bosphorus Strait in the 7th century BCE. A thousand years later, it would be renamed Constantinople and serve as the capital of the Eastern Roman (Byzantine) Empire and later the Ottoman Empire. It is now the historical center of Istanbul, one of the largest cities in the world.

Incidentally, another one of Istanbul’s districts was also established by Megarans. It was colonists from Megara who founded the town of Chalcedon–also near the southern end of the Bosphorus, but on the opposite shore. It was the site of an important early Christian ecumenical council in 451 CE. Today, it is called Kadıköy and is one of the most lively districts of Istanbul.

Megara also contributed to the culture and discourse of ancient Greece. It was the hometown of the poet Theognis and the philosopher Euclides, who studied under Socrates and founded the Megarian school of philosophy. 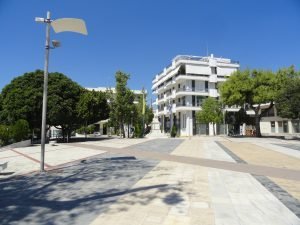 Although the boundaries of the modern city roughly correspond to those of the ancient town, there is unfortunately not much left to see of the latter. There are two areas of slightly higher ground in the middle of town which once served as the city’s two acropolises, but they (like pretty much everything else) have been built over. In between the two acropolises was the agora (market) of the city, which is now covered by Iroon Square (pictured left). This is now also the center of the modern city, just a block north of City Hall.

In fact, there is only one official archaeological site in Megara. It is called Theagenes Fountain, after the tyrant who ruled the city in the late 7th century BCE. However, it was actually built in the early 5th century BCE. It was a cistern with a roof, which was supported by 35 pillars. It is located 180 meters north of Iroon Square. 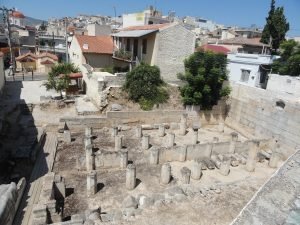 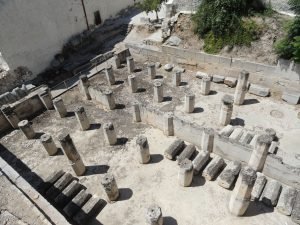 It seems that there are some other traces of excavated areas which can be found here and there in the city if you know where to look. For example, 400 meters north of Theagenes Fountain–at the corner of Thivon and Spartis–is a glass-covered excavated area featuring some ancient structures. 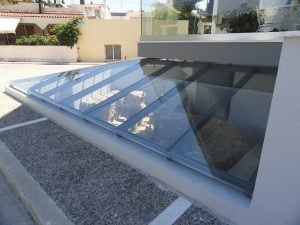 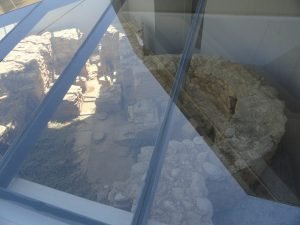 There is a small but splendid museum two blocks east of Iroon Square. Here you can see many different types of finds from ancient Megara. 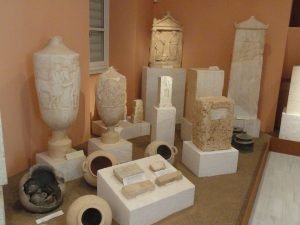 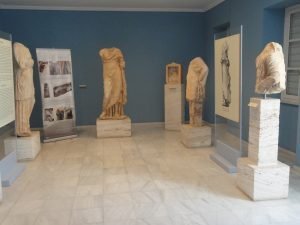 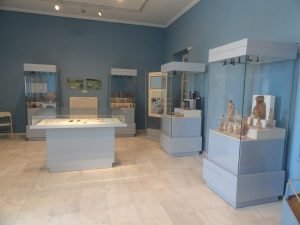 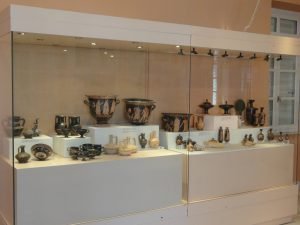 Tips for the Visitor
Megara is on the Piraeus-Kiato train line, as is Athens and Corinth. It takes 40 minutes to reach Megara from Athens Station (next to the Larisis Station metro stop) and an hour from Piraeus. A return ticket from Athens costs 4.80 euro.

From Megara Station, it is a 3-km drive to the center of Megara. On our visit, there was a free municipal bus waiting at the station to take people into town. To visit the archaeological museum and archaeological site, it’s best to get off the bus just as it turns right onto 28th October Avenue and walk the 200 meters north to Iroon Square. The bus will eventually pass by Iroon Square, but only after traversing the eastern, northern, and western edges of town.

Theagenes Fountain is gated with a ticket kiosk. However, when we were there, it seemed that the site had been shut down indefinitely. Luckily, you can view the site through the fence from the street/parking area which runs along the eastern edge of the site.