Milan is the second largest city in Italy as well as the country’s financial center. It is located in the region of Lombardy in the northwest near the Alps.

The city is said to have been founded by the Celts of the region (the Insubres), from whom the city was captured by the Romans in the 3rd century BCE. The Romans gave the name Mediolanum to the city, and four centuries later it was made one of the capital cities of the Roman Empire during the reign of Diocletian.

Unfortunately, the ancient monuments that once stood in the city have not been well preserved. However, there are some places in the city where glimpses of its Roman past can be caught. The most historically significant such place is probably the site of the imperial palace, which some emperors in the late Roman period used as their primary residence. 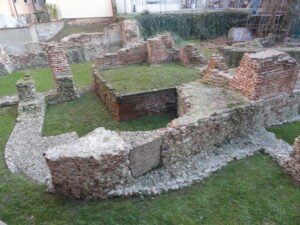 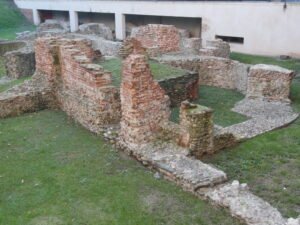 The current incarnation of the Basilica di San Lorenzo Maggiore dates to the 18th century, but the original church which stood there was built in the 4th century CE. Although the Roman church itself has been replaced, the row of columns which lined the street in front of it are still standing. 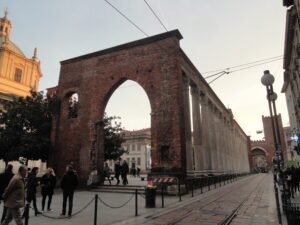 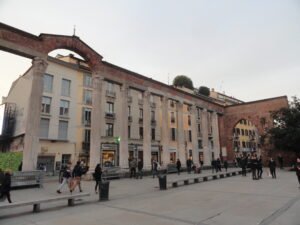 Another church whose original form dates to late Roman times is the 11th-century Romanesque Basilica di Sant’Ambrogio, where the remains of St. Ambrose, a 4th-century archbishop of Milan who built the original church that would later be named after him, are on display beside those of two early Christian martyrs. Although the present form of the church is medieval, there is a Roman column which survived and is located next to the church. It is called “La Colonna del Diavolo” (“The Devil’s Column”) due to a legend which says that Satan bored the two holes found on the side of the column with his horns in frustration after his failed temptation of St. Ambrose. 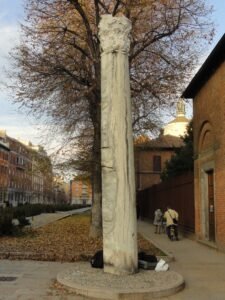 As the bishop of one of the capital cities of the newly-Christian empire, St. Ambrose had an influence over the emperors who reigned during his tenure. In 390 he even refused communion to Emperor Theodosius I until he made penance for a massacre he had ordered in Thessalonica in response to the public lynching of the local military commander there.

Other faint traces Mediolanum include a small rockpile of what is left of the city’s circus maximus and the scant remains of its amphitheater.

Tips for the Visitor
The ruins of the imperial palace can be viewed from Via Brisa from near its intersection with Via Ansperto. The traces of the circus are visible on the east side of Via Circo about 30 meters north of Via del Torchio. The ruins of the amphitheater are in a small archaeological park which can be accessed from a public building, and the street entrance is at Via Edmondo de Amicis 17.

More about ancient Mediolanum can be learned at the city’s archaeological museum, located a couple of blocks west of the ruins of the imperial palace.