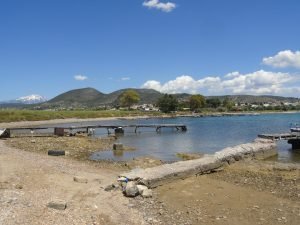 The archaeological site of Manika is located on the southwestern coast of the Greek island of Evia (Euboea) just 5 km up the coast from the city of Chalkida (Chalcis). The site is based on and around a thin peninsula which extends about 500 meters into the North Euboean Gulf and is roughly 100 meters wide on average.

Although there is evidence of settlement there running all the way into Greco-Roman times, Manika peaked in the early Bronze Age. The inhabitants of the prehistoric town traded in obsidian and worked bronze. The site is important because of its age as well as its location, due to Euboea’s position as standing between mainland Greece and the Cyclades, two regions whose Bronze Ages are given separate names by archaeologists (Helladic and Cycladic, respectively), thus the study of Manika can show us the connecting role Euboea played in that early period.

Unfortunately, we were not able to find any visible archaeological remains at Manika. It seems that the structures uncovered in the excavations that have been conducted in the area over the years have either been built over, reburied, or hidden by vegetation. The only area which is fenced off and signposted as an archaeological site is a small patch of land near to the base of the peninsula. However, all that can be seen in it is tall grass.

Other evidence of the settlement was found closer to the end of the peninsula. Today the peninsula just has a lot of grass and small boulders, but there are some nice views from there. 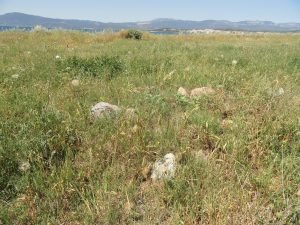 Further settlement structures were found on various parcels of land in the neighborhood near the base of the peninsula. In addition to the settlement structures, there were also cemeteries discovered which included rock-cut tombs, some of which were dated to the early Bronze Age. Some of the tombs included as grave goods Cycladic figurines and the so-called “frying pans” which were common in early Bronze Age burials in the Cycladic islands such as Syros and Kea. Unfortunately, the land parcels have either been built over or are covered with overgrown grass. Also, some traces of the settlement were even found in places which are now underneath the shallows just south of the peninsula. 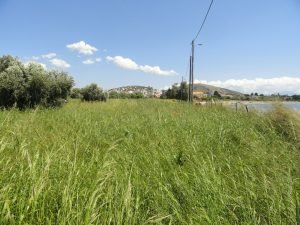 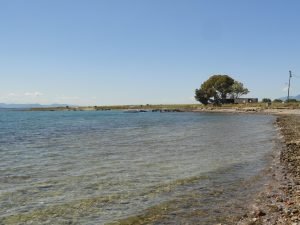 The old archaeological museum in Chalkida has some finds from Manika on display. 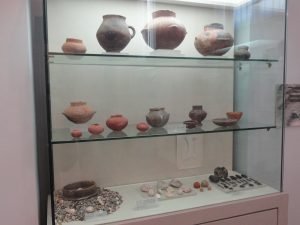 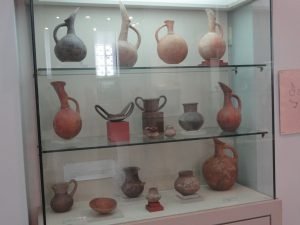 The museum also displays a photo of some excavated houses as well as some diagrams of the tombs found at the site. 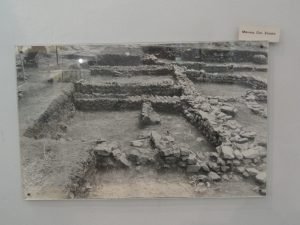 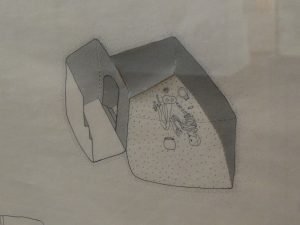 Tips for the Visitor
As mentioned above, there are no archaeological remains to be seen at Manika today. The neighborhood itself is entirely residential with no restaurants or cafes, etc. However, there is a beach equipped with outdoor showers just to the south of the peninsula, which means that you can spend an afternoon swimming in shallow water over what was once part of the prehistoric settlement.

There are buses which run between Chalkida and Nea Artaki, which is just a few kilometers further up the coast from Manika. There are many bus stops along the highway that connects the two towns,  and from there it’s just a 700m-walk to the peninsula. See our article on Chalcis for information on getting to Chalkida from Athens.