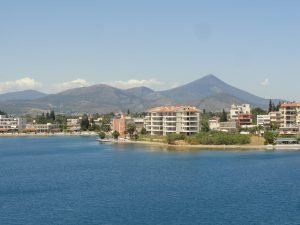 The seaside town of Lefkandi is located on the southern coast of the Greek island of Evia (Euboea). It is 8 km southeast of Evia’s main city of Chalkida (Chalcis) and 10 km west of the town of Eretria.

Lefkandi in recent years has come to be seen as one of the most exciting archaeological sites in Greece. Although the settlement there dates back to the early Bronze Age, the findings there have given scholars new insights into the early Iron Age of Greece–the period following the collapses which accompanied the end of the Bronze Age. It was during the early Iron Age that ancient Greece began to redevelop its identity, which included the development of the Greek alphabet. Archaeologists have concluded that sites in Evia such as Lefkandi and Eretria had a key role in the early diffusion of the elements of Greek culture in that period which made what we today call ancient Greek culture what it was to become.

The archaeological site at Lefkandi is named after the modern village which was built over it as no ancient name of the settlement is known. The excavated areas of the settlement can be found on the top of a hill on an outcropping just east of the larger one of the village’s two bays. 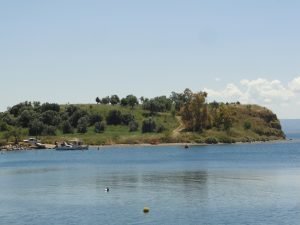 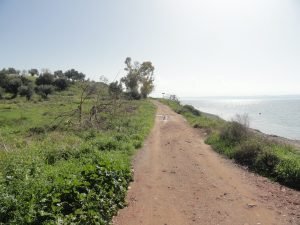 This part of the site is called Xeropolis, and there are two excavated zones. The west zone (which excavators have dubbed Region II) features structures including what appears to be a wall. 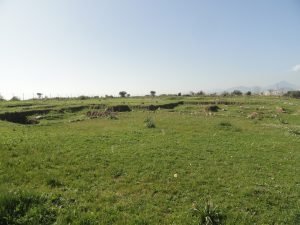 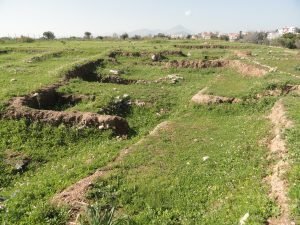 More structures can be seen in the east zone (Region I), including a building identified as a possible megaron, or great hall. 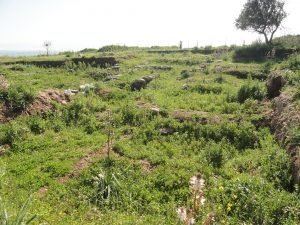 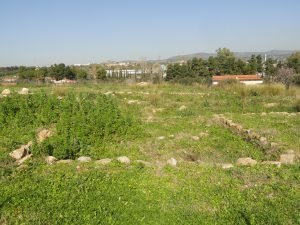 Embedded within the modern village itself are several vacant lots which are fenced in and mostly covered with tall grass. In antiquity, over the centuries there were several cemeteries located in this area, and these vacant, grassy, fenced-in lots are areas of those cemeteries which have been excavated in the past. 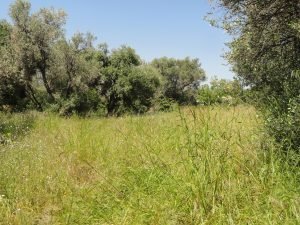 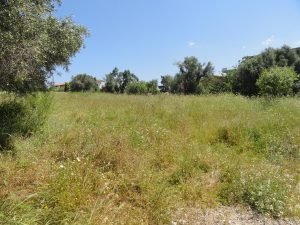 The most interesting find among the cemeteries is the remnants of a 3,000-year-old building in what has been called the Toumba cemetery, an area which has more high-status graves than the others. The building has been identified as a heroon, which is a grave or shrine dedicated to a hero. The postholes found around the structure indicate a level of architecture more advanced than scholars had previously thought was being employed in Greece so early in the Iron Age. A man (cremated), a woman (inhumed), and four horses were found buried within the structure, along with some prestigious grave goods. The Toumba Heroon (also called the Lefkandi Heroon) is fenced in with a modern canopy over it, but it can be viewed from the street. 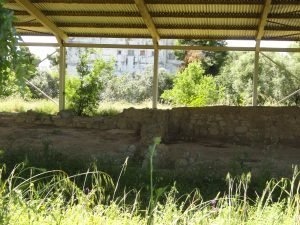 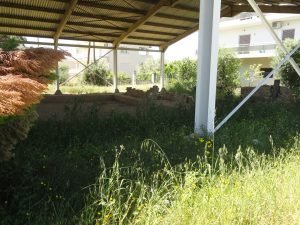 There is no museum in Lefkandi. However, the Archaeological Museum of Eretria has a substantial section of its collection dedicated to the finds from Lefkandi, which consist of items from the settlement at Xeropolis as well as the necropolis, including some items found in the Toumba Heroon. 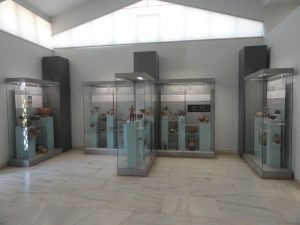 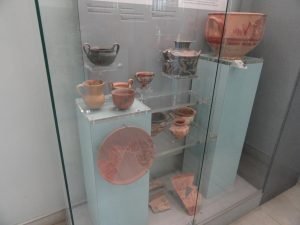 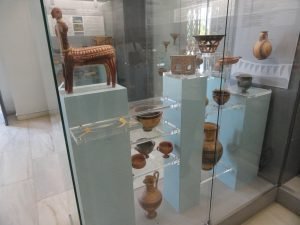 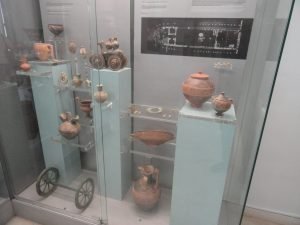 One of the most interesting finds from the Toumba Heroon is the linen cloth that was used to wrap the cremated remains of the man interred there. It is in relatively good condition because it was protected by the bronze Cypriot urn in which it spent the last 3,000 years. The cloth is on display at the National Archaeological Museum in Athens. 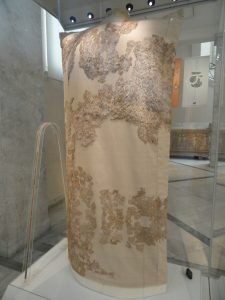 Tips for the Visitor
There is a bus which runs from central Chalkida to Lefkandi and leaves from in front of the pharmacy on the corner of Arethousis and Kriezotou in Chalkida, not far from the old Archaeological Museum. The bus is generally hourly, but precise departure times and even the bus number have not been consistent on our multiple visits, although every bus has displayed Lefkandi (“LEYKANTI”) as its destination. You can buy bus tickets at the kiosk across the street from the bus stop. You’ll need a B-zone ticket for Lefkandi (1.70 euro), and another one to get back, of course. The trip takes just under half an hour each way. See our article on Chalcis for information on getting to Chalkida from Athens.

As of this writing, there is no archaeological tourism in Lefkandi. The excavated areas are all closed to the public but are small and can be easily viewed from beyond the fencing which protects them. (All of the photos of the site in this article were taken from outside the fencing.) As such, there are no opening or closing times, nor are there any admission fees.