Hierapolis is an archaeological site located at the top of a hill covered in gleaming white travertine, a type of sedimentary rock which comes from the hot springs on the top of the hill. The travertine-covered hill–with its naturally formed terraces and pools–is one of Turkey’s most famous tourist destinations. It is called Pamukkale (which means “Cotton Castle” in Turkish), and it is located adjacent to a village of the same name in the province of Denizli, 15 km north of the city of Denizli. 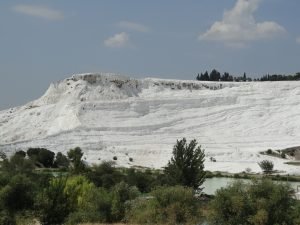 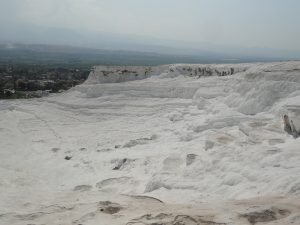 Because of the unique natural environment in which it is located, especially because of its hot springs, people in ancient times saw in the site of Hierapolis a place of spirituality as well as a place to relax and “take the waters.” It was the site of a 3rd-century BCE Phrygian temple, then later that of a thermal spa in later Hellenistic times. It became part of the Roman Empire in the 2nd century BCE.

Hierapolis also has a connection to early Christianity. It was also just 9 km north of ancient Laodikeia, the site of one of the Seven Churches of Asia mentioned in the Book of Revelation in the New Testament of the Bible. Hierapolis itself was mentioned towards the end of Paul’s letter to the Colossians (Colossians 4:13), so it seems there was an early Christian community there.

You could enter the site from the South Gate, which is next to a parking lot and thus accessible by road, but getting there on foot is a lot more fun. From the center of the village of Pamukkale, you can walk up the travertine slopes of the hill, wading in the pools and puddles formed by the spring water along the way. 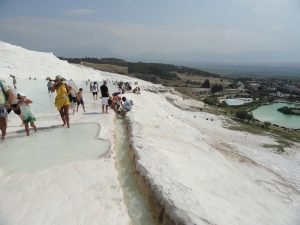 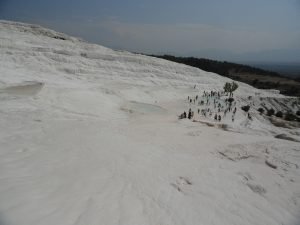 The top of the hill is a plateau covered with the ruins of the ancient city of Hierapolis. 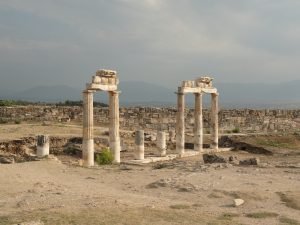 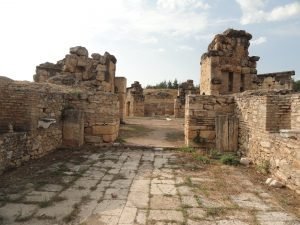 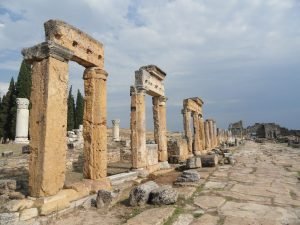 Among the ruins are the ruins of a church centered on an empty tomb which archaeologists who found it in 2011 claim was originally the tomb of St. Philip the Apostle. Another relatively recent discovery is the solving of the mystery behind stories from antiquity (including that of the ancient geographer Strabo) that Hierapolis was home to a temple that served as a gate to the underworld. There were accounts that any bird or other animal that came near the ceremonial entrance to Hades would immediately drop dead, and priests performed rituals in which they led sacrificial animals into a pit immediately in front of the gate, upon which the animal would collapse and die. Recently scientists have studied the gateway and found that it was walled up in antiquity, and when opened, a gas containing deadly levels of carbon dioxide emerged which could easily kill any animal that was close enough to the ground (thus sparing the priests). This is the result of Hieropolis being built on a fault line.

There is also a small museum among the ruins. 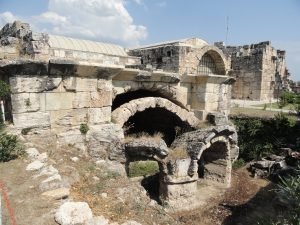 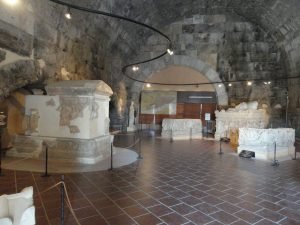 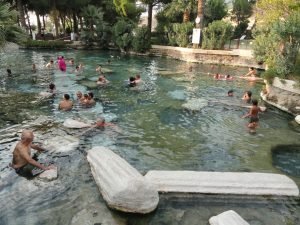 As Hierapolis has been famous since ancient times as a spa resort, one cool activity available there even today is to take the waters of the hot spring pool while lounging atop ancient columns and other ruins. It’s a unique experience.

Tips for the Visitor
Unfortunately, Pamukkale is not quite what it was in earlier decades. Years of tourism and environmental factors have taken their toll on the site, and many of the pools which once covered the hill have dried up. Efforts to protect the site have been implemented, and as a result, only a small part of the travertine terraces and pools on the way up the hill to ancient Hierapolis are accessible to the public. Also, visitors who choose to walk up the hill to Hierapolis are required to do so barefoot, so be prepared for that. However, you don’t have to explore Hierapolis barefoot–you can put your footwear back on once you reach the top of the hill.

To get to the village of Pamukkale, you can take a minibus from the bus terminal in Denizli, which is a large city and has long-distance bus service to anywhere in Turkey. Pamukkale is well known as a popular tourist haunt, and there is a lot of accommodation to fit every budget available there.