Today, the city of Bodrum is a wonder for partygoers, as it is well-known as the biggest summertime party town in Turkey. In ancient times, however, it was known for a different wonder—one of the Seven Wonders of the Ancient World. 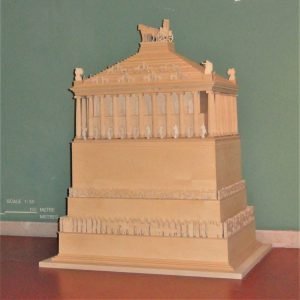 The ancient town which stood here in this region once known as Caria was called Halicarnassus. It was the hometown of Herodotus, the 5th-century-BCE “father of history.” Unlike many cities of Asia Minor which surrendered to Alexander the Great without a fight, Halicarnassus daringly resisted but was eventually captured by the young Macedonian king after a siege in 334 BCE. The siege came just 19 years after the death King Mausolus, who had governed the city on behalf of the King of Persia. His widow had a huge, elaborate tomb built for him, which was finished in 350 BCE. The tomb is referred to today as the Mausoleum of Halicarnassus. 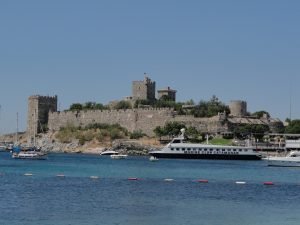 The Mausoleum stood for many centuries. Of the Seven Wonders, only the Great Pyramids of Giza lasted longer. But much of the tomb was then destroyed by successive earthquakes at the end of the Middle Ages. Then in the 15th century, when the Knights of St. John decided to refortify their castle in front of the city’s harbor (pictured left), the ready availability of so many strong blocks and other building materials from the ruined Mausoleum less than a kilometer away proved to be the end of much of what remained of the once-magnificent tomb.

Like most of the other wonders of the ancient world, the Mausoleum of Halicarnassus is now mostly just a rockpile. 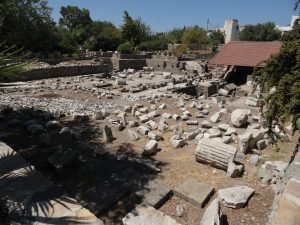 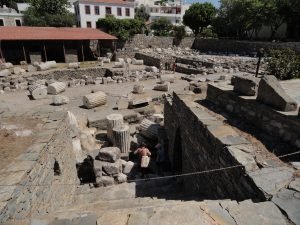 Tips for the Visitor
Bodrum is an easy city to get to by land, sea, and air. As a relatively large city and popular vacation destination, it is well serviced by long-distance bus routes and also has an airport. Bodrum also has a port with ferry routes servicing destinations around the Aegean. The shortest route connecting Bodrum to Greece is the one-hour fast ferry to and from the Greek island of Kos.