The Ħal Saflieni Prehistoric Hypogeum is commonly referred to in Malta as simply the Hypogeum (although there is another hypogeum in the country, on the island of Gozo) and is located in the southern outskirts of the Maltese capital, Valletta. It is just 500 meters west of the Tarxien Temples.

The Concise Oxford Dictionary of Archaeology defines a hypogeum as “a kind of rock-cut chambered tomb with a series of interlinking cells or rooms, mainly used for inhumation burial.” Malta’s Hypogeum was just such a structure. It is an underground hive of burial chambers carved into the limestone bedrock, although some chambers seemed to have been used in certain rituals. For instance, one room has very interesting acoustic properties which may have been used to amplify ritual chanting.

The site was first discovered in 1902. Archaeologists have determined that the oldest parts were built in around 4000 BCE and that the site was used up until 2500 BCE–around the time that the Great Pyramids of Giza were built. 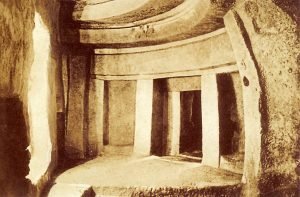 Photography is not allowed in the Hypogeum, so we were unfortunately not able to photograph the site. Luckily, the article on the Hypogeum on wikipedia.org features this photograph taken in the early 20th century by Richard Ellis. In it can be seen the way in which the builders of the Hypogeum carved some of the surfaces of the underground chambers to mimic the same types of architectural features which are found in prehistoric temples in Malta, especially those just 500 meters away at Tarxien.

Better-quality photographs can be found on the website of Heritage Malta, the government institution which manages the site. 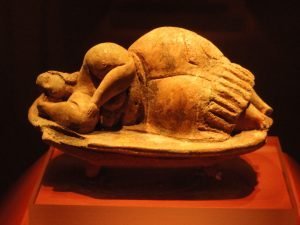 Many of the artifacts recovered from the Hypogeum can be seen in Malta’s National Museum of Archaeology in central Valletta. Probably the most important find is a small clay figurine known as the Sleeping Woman of Malta.

Tips for the Visitor
Up until 1990, the site suffered significant damage as a result of unrestricted tourism. After a long restoration project between 1990 and 2000, a new system was instituted which severely limits the number of people who can visit the site each day. As of now, only eight groups of 10 visitors each (guided tours only) are allowed into the Hypogeum each day. As a result, prospective visitors need to purchase tickets online from Heritage Malta well in advance of their visit as tour dates are often booked solid for weeks. Spots cost 35 euro each, but there are discounts for youth, children, students, and people aged 60 and over. Note that children under 6 are not admitted.