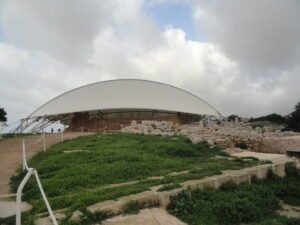 Both temple sites were also contemporaneously in use with several other prehistoric sites excavated in Malta, such as the temples at Tarxien and their associated hypogeum at Ħal Saflieni, both of which are found 8 km northeast of Ħaġar Qim and Mnajdra. The temples at Ħaġar Qim date from the 4th millennium BCE. This fits with what has been called the Temple Period (3600 – 2500 BCE) in the timeline of Malta’s prehistory.

Approaching the canopied site from the direction of the visitors’ center, one comes face to face with the impressive gateway on the east side of the main building of the temple complex. 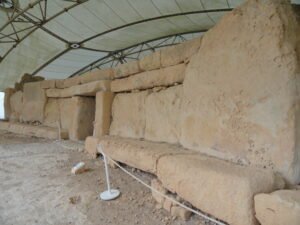 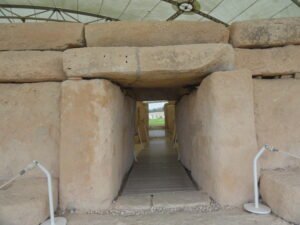 Once inside, there are many upright structures and chambers visible from the corridors which make up the visitor’s paths through the main building. 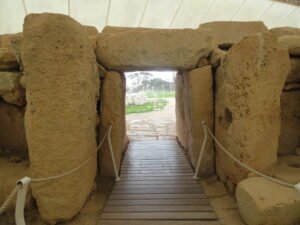 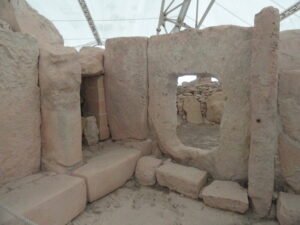 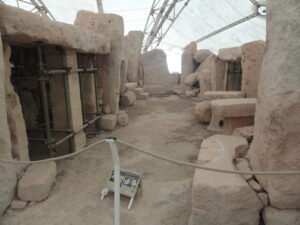 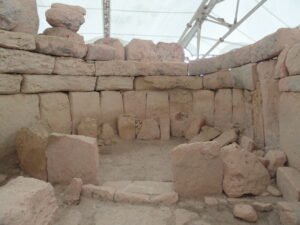 Also inside the main building, the first archaeologists who excavated the site in 1839 found what they determined to be an alter decorated with floral patterns on all four sides. A replica is visible there today, while the original is kept safe behind glass at the National Museum of Archaeology in Valletta. 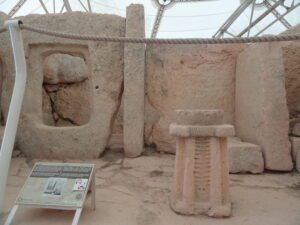 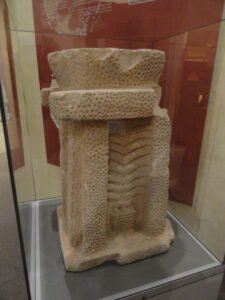 Outside the canopy are some rockpiles of what is left of some of the other structures that were part of the site that were not as well preserved as the main building. Some have called these temples and thus determining the site was made up of multiple temples, while others have said their function is unclear. 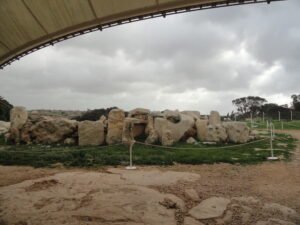 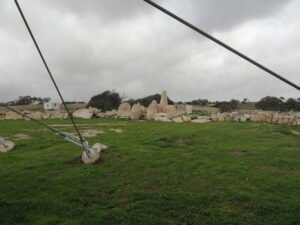 Some finds from the temples are on display at the visitor’s center. 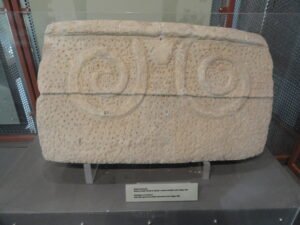 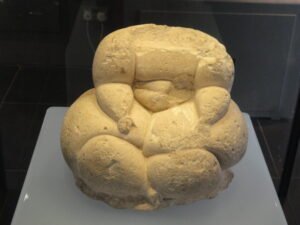 Also in the visitor’s center is a model of the site. This is helpful for making sense of how the temples are shaped and arranged, as this is very difficult to make out when walking through the maze of chambers inside the temples. Also useful — not to mention fascinating — is the feature of the model which allows you to see how the sunlight enters certain portals of the main building on certain days of the year, which was clearly planned by the builders. 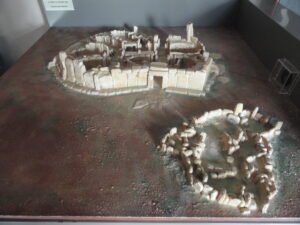 Tips for the Visitor
The sites of Ħaġar Qim and Mnajdra are located in an area which is both an archaeological park and a nature preserve with walking trails. You don’t need a ticket to walk around the park or hike along the trails, but you will need a ticket to visit the two temple sites (which are both fenced in, each with its own ticket booth) and also the small museum in the visitor’s center (which also features a cinematic salon presenting a short but impressive 3D video presentation). The ticket sold in the visitor’s center covers entrance to both temples and the museum, and the regular price is 10 EUR.

The park is located a little over a kilometer southwest of the the town of Qrendi. There is a bus stop (Hagar) right by the entrance driveway to the visitor’s center. One of the buses that stop there (74) sets off from the main bus terminal just outside the city walls of Valletta, and the journey from there to Ħaġar Qim takes around 40 minutes. There is also another bus that passes by (201) which runs between the town of Rabat and Malta International Airport. Note that these buses run once per hour, so check the timetables in advance if you are planning to go by bus. Another option is to take a taxi, which you can book by phone in advance at a set price, which may vary depending on the time, day, and location.