Göbekli Tepe (also spelled Göbeklitepe) is one of the most interesting archaeological sites in the world. It is located in the southeastern Turkish province of Urfa 15 km northeast of the city of Urfa.

It has been determined to be a massive temple complex, the oldest parts of which were built around 9500 BCE. However, to date only 5% of the site has been excavated.

The reason for the immense international interest in Göbekli Tepe has a lot to do with the mysteries surrounding the site. One interesting aspect of the site is that it was purposefully buried with debris approximately 1500 years after it was built, presumably by those who were using it. Why this was done is unknown. Also up for debate are the meanings of the images carved onto the large stone slabs which were arranged in the enclosures that have been excavated so far. Most of the carvings depict animals such as bulls, foxes, snakes, and birds. 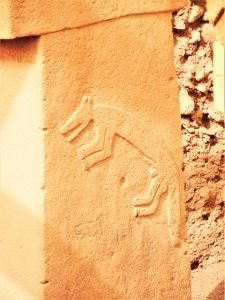 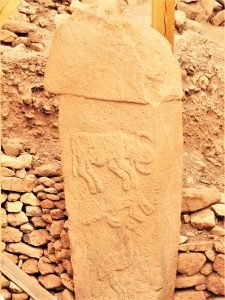 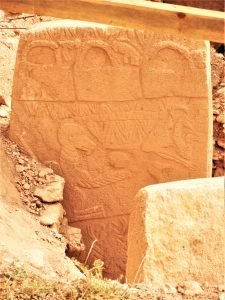 The lowest (oldest) levels of the site date to the Pre-Pottery Neolithic A (PPNA) period and feature circular cult buildings with T-shaped pillars and other stones featuring carvings. The second-oldest layer dates to the PPNB and features rectangular-shaped cult buildings with pillars like those at Nevali Çori. 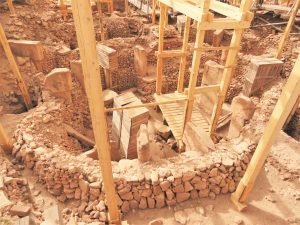 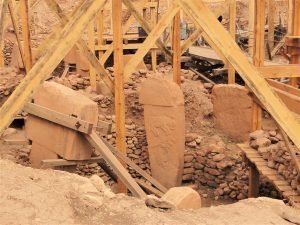 There is also evidence of quarrying at the surface. 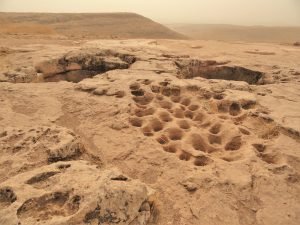 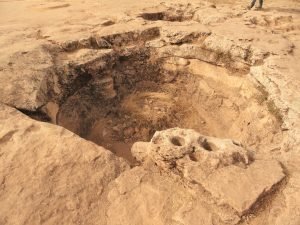 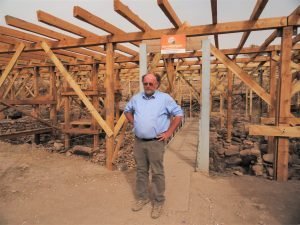 Excavations at the site began in the mid-1990s under the direction of Klaus Schmidt of the German Archaeological Institute, and have continued under the same institution since Schmidt’s sudden untimely passing in 2014. On our visit in 2013, Prof. Schmidt was very gracious to allow us to photograph him in front of the site around which his professional life revolved during nearly the last two decades of his life.

Schmidt had a lot of interesting ideas about Göbekli Tepe. He concluded that it was visited by people throughout the region as a central pilgrimage site of a cult commonly practiced by people in different communities nearby. Indeed, there are many archaeological sites throughout the province of Urfa at which similar cult buildings with T-shaped pillars arranged in similar ways have been found–at Nevali Çori, Karahan Tepe, Ayanlar Höyük, Kurt Tepe, Sefer Tepe, Taşlı Tepe, and Hamzan Tepe. All of these sites were determined to have been used at the same time as Göbekli Tepe.

Another fascinating theory of Schmidt’s relates to what he felt the site tells us about the origin of the concept of human settlement. Up until now it has been assumed that people began to build cities and then later decided to build religious structures such as temples in their city. But according to Schmidt, Göbekli Tepe shows us that the opposite happened–people started building temples first and then later decided to build cities (in the primitive sense at first) to be near their temples.

In 2017, a new finding about the site was made. There seems to have been some kind of skull cult practiced at Göbekli Tepe. This conclusion was reached by archaeologists after it was determined that fragments of human skulls found at the site showed evidence of being carved, painted, and possibly put on display there.

It’s important to point out that the site is not unique as there were many cult structures in the area being used at the same time, so in that sense, its significance has been exaggerated to some extent. However, it is fascinating to see such a huge temple complex  being used at such an early date. Those aspects, when combined with the mysteries regarding the symbols carved onto the stones, have led to a lot of speculation, both in the realm of archaeology and pseudoarchaeology. The speculation is fueled by the fact that we understand so little about the site that many theories–even fringe ones–can often escape being conclusively proven wrong.

However one interprets the site, what is clear is that Göbekli Tepe gives us a magnificent window into our past, especially in regards to how humans began constructing places of worship and coming together. It will be fascinating to see what else remains to be found in the other 95% of the site which has not yet been excavated.

Tips for the Visitor
The site is a 20-km drive from the center of Urfa. A lot has changed regarding access to the site since our visit in 2013. For instance, an entrance fee is now charged, and it seems that the site is sometimes closed to the public. Please check the page for the site on the official website of the Turkish Ministry of Culture and Tourism, although we cannot vouch for how up-to-date the information there is.