The archaeological site known as the Ġgantija Temples is located near the center of the Maltese island of Gozo.

The temple complex consists of two side-by-side temples with separate entrances, each with multiple rounded enclosures. The complex was encircled by a large wall. Just as later Greeks thought that some Mycenaean structures at sites like Mycenae and Tiryns must have been built by a cyclops, the local people of Gozo assumed that the temple complex had been built by giants, and so named it Ġgantija, which is Maltese for “place of the giants.”

The timeline of the Ġgantija Temples matches those of other prehistoric temple sites on the islands of Malta, such as the Tarxien Temples. That is, the earliest structures there date to 3600 BCE and were used until around 2500 BCE, when use of the temples switched to that of the purpose of funerary rights, just as what happened at Tarxien.

Since the time of our visit, a visitors’ center has been added to the site. 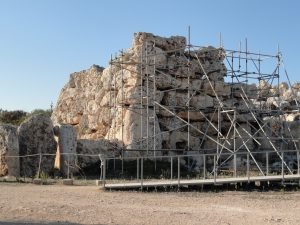 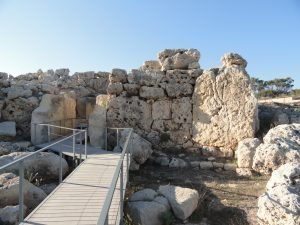 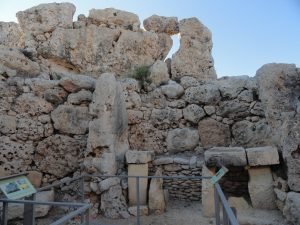 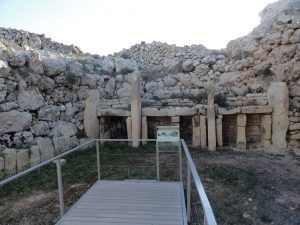 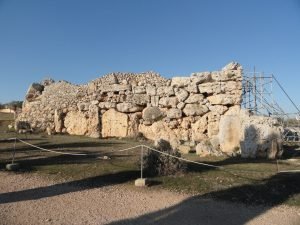 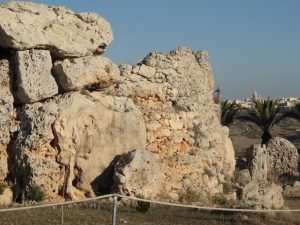 Tips for the Visitor
The site is a 7-km drive from the port of Mgarr, where the ferries from the main island of Malta arrive. Coming from there, you can catch the 322 bus from the Vapur bus stop in front of the Gozo Ferry Terminal to the Tempji bus stop, which is just 150 meters west of the site.

The site is open 9am to 5pm (6pm in summer) and full admission costs 9 euro.