Ephesus is probably the most frequently visited archaeological site in Turkey. It was a significant ancient city, and as for ruins, there are a lot to see there today. However, there are many ancient cities in Turkey which meet those criteria, so the deciding factor in terms of its popularity is probably the location. The main site of Ephesus is located in İzmir province just two kilometers west of the town of Selçuk. That puts it 50 km south of the city of İzmir (Turkey’s third largest), but just 10 km northeast of the resort city of Kuşadası, which is also a popular stop for Mediterranean cruises. It is about 5 km from the Aegean coast, although in ancient times Ephesus was a coastal city with its own harbor.

The area in and around the site goes back to the Neolithic and Bronze Ages, but the Greek city was first established by colonists from Attica in the 10th century BCE. Ephesus has had a long, tumultuous history, changing hands many times. The city was conquered many times and even raised in ancient times. Greeks, Lydians, Persians, and Romans have all ruled over the city at various times in antiquity.

A small early Christian community was established there, and it was to them that Paul the Apostle wrote his Epistle to the Ephesians, which is part of the New Testament of the Bible.

The ruins are mostly laid out along one ancient street. In the middle of the site is the impressive theater. 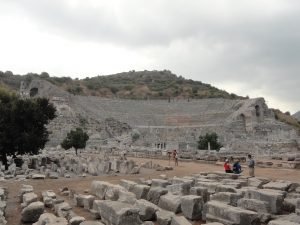 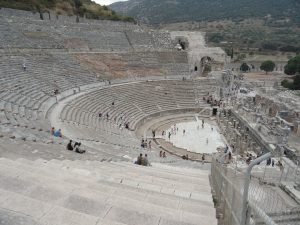 Perhaps the most photographed building in Ephesus is the facade of the Library of Celsus, built in the 2nd century CE. 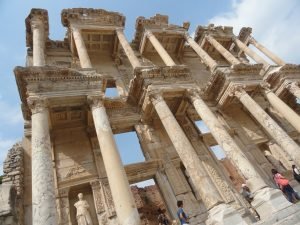 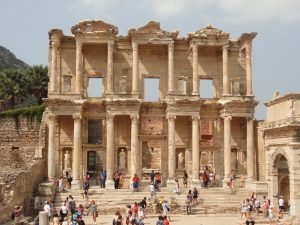 Another impressive facade is that of the Temple of Hadrian. 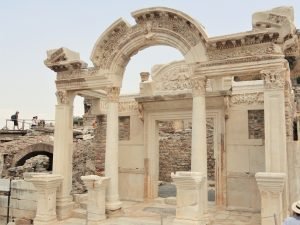 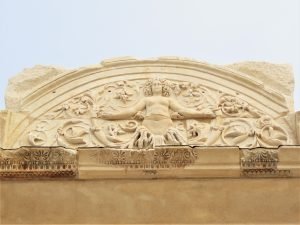 There are many other ruins to take in while wandering along the main thoroughfare of the site. 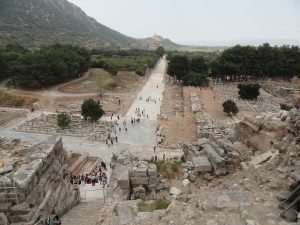 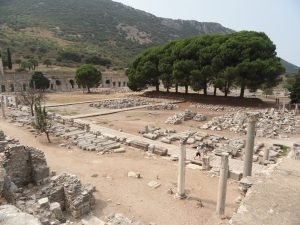 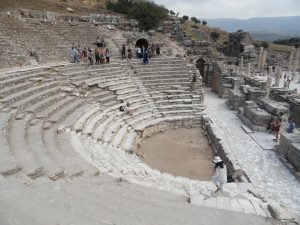 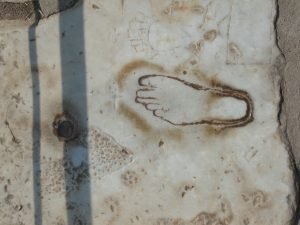 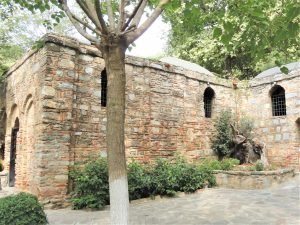 In addition to the main ruins, there are also several sites in the vicinity which are too far away to be included within the site today but in antiquity were considered connected to Ephesus. The most frequently visited one is probably the Virgin Mary House, which is about 2 km south of the main site. The house was discovered based on the visions of a German Catholic nun in the early 19th century. She and the pilgrims who visit the site believe that this is where the Virgin Mary lived during the last years of her life. Although the nun was eventually beatified, the church has never formally verified the authenticity of the site.

Another satellite site is the site of the Temple of Artemis, which was one of the famed Seven Wonders of the Ancient World. It is located about 2 km northeast of the main site at the western edge of Selçuk. However, like all the other wonders except for the Pyramids of Giza, the temple is gone, and all there is to see today is a field empty save for a lonely column and a few rockpiles. 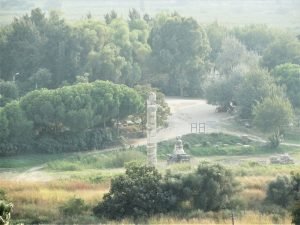 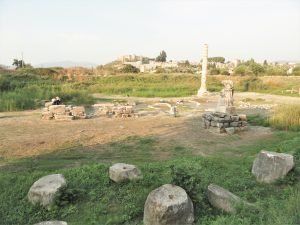 A third satellite site of great interest is the ruins of the Basilica of St. John, which is today found inside the town of Selçuk, just 400 meters northwest of the site of the Temple of Artemis. 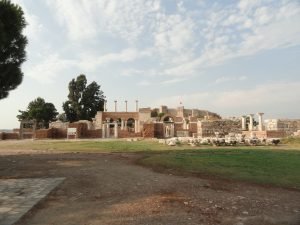 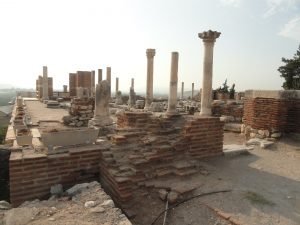 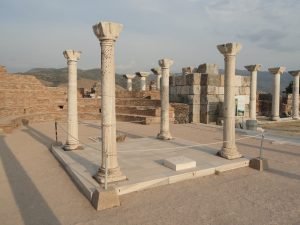 The church was built in the 6th century on the site of the Tomb of St. John the Apostle, who may have been the same person as St. John the Divine, whose vision of the apocalypse (claimed to have been had in a cave on the island of Patmos [just 100 km from the church]) is recounted in the Book of Revelation in the New Testament of the Bible. The tomb of St. John today is a roped-off marble square on the floor flanked by four columns.

Tips for the Visitor
As mentioned in the opening paragraph, the popularity of Ephesus comes largely as a result of its convenient location. Coming from Izmir, you can get a bus to Selçuk, and then a minibus from there to the site. Many visitors to Ephesus travel there while based (or making a cruise stop) in Kuşadası. From there you can take one of the frequent minibuses to the site (called “Efes” in Turkish) as well as the town of Selçuk to see the site of the Temple of Artemis and the ruins of the Basilica of St. John. If you don’t mind walking two or three kilometers, you could even walk to those sites from the main site.

Unfortunately, the Virgin Mary House (“Meryem Ana Evi” in Turkish) is a bit harder to get to. Although it is only 2 km away as the crow flies, the roads leading there are very winding, so it turns out to be a 9-km drive from the main parking lot at the north end of the main site at Ephesus. If you’re not there on an organized tour, it’s best to just take a taxi. If you can find a taxi at in the parking lot at the southern end of the site, the drive will be significantly shorter (about 5 km). However, if you return to the southern end of the site, the only way to get back to the main parking lot (where the buses are) from there would be to re-enter the site, which would require the purchase of a new ticket, unless you are willing to walk the 4 km road route between the two parking lots that the taxi would have taken you.