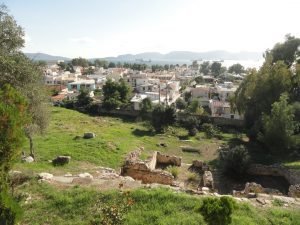 The ancient site of Eleusis can today be found in the modern town of Elefsina, which is located on the Gulf of Elefsina 20 km west of the center of Athens on the road to Megara. In ancient times, it was where the ceremonies related to the Eleusian Mysteries were held every autumn.

The Eleusian Mysteries were centered on the myth of Demeter and Persephone. According to the myth, Demeter, the goddess of agriculture and the harvest, became upset after her daughter, Persephone, was abducted by Hades, the god of the underworld. As she searched for her, the crops in the fields did not grow, the leaves on the trees died, and the Earth became barren. A deal was arranged to allow Persephone to return to her mother, but because Persephone had eaten some pomegranate seeds while in the underworld, she was required to spend a few months there every year. This is how Greek mythology explained the changing of the seasons: They reflected Demeter’s annual grief of losing her daughter to the underworld and getting her back a few months later.

The event of Persephone’s return to Hades was commemorated at Eleusis every year at the beginning of autumn, for it was at Eleusis that–according  to the myth–Demeter paused in her quest to find her daughter and in disguise served the local king and helped to raise his son. There are different versions of the story, but the main part of it is that at some point Demeter revealed at Eleusis the secrets of death and the afterlife.

And so every autumn, a sacred procession would depart from the Dipylon Gate on the northwest side of Athens and follow the road to Eleusis, where the events connected to the Mysteries took place. Sections of the ancient road to Eleusis can be seen today in the square above the Egaleo metro stop in western Athens. 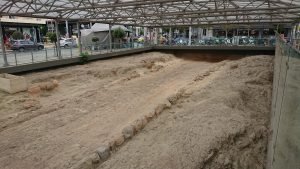 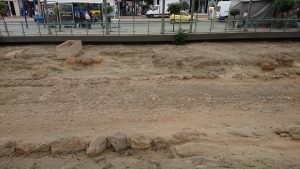 At the site of Eleusis, the ruins of the structures of the religious complex there are extensive, and they are all conserved within one archaeological site in the center of the modern town. At the entrance to the site is a large, paved Roman courtyard. In the middle of the courtyard stood a Roman temple dedicated to Artemis Propylaia and Poseidon. 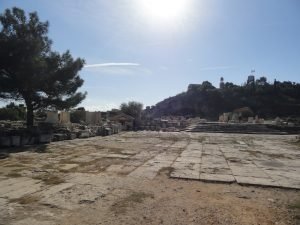 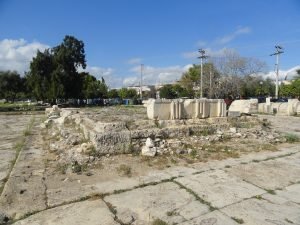 Other structures on the edges of the courtyard included the East Triumphal Arch and an eschara, which was used for sacrifices dedicated to Hades and Persephone in the underworld. All of the structures in this part of the site are Roman. 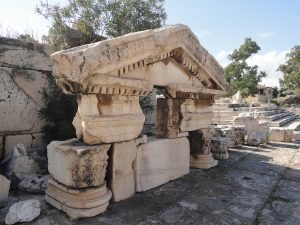 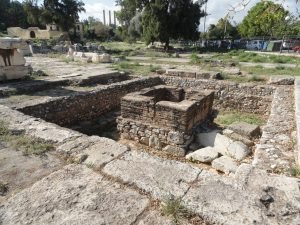 Leaving the courtyard and heading for the main part of the site, a visitor in Roman times would have passed through the Greater Propylaia, a monumental gate which had been built by Emperor Marcus Aurelius. 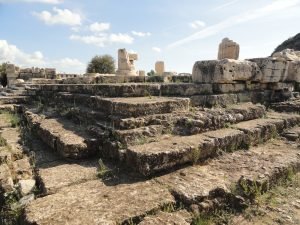 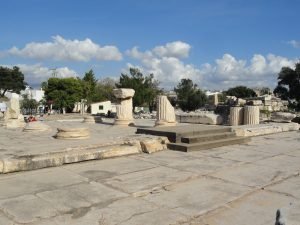 After passing through the Greater Propylaia, the path into the site leads to another monumental gate, the Lesser Propylaia. There were two massive Caryatid statues on the inside of the the gate. The upper part of one of them is on display in the onsite museum, while the other one is in the museum at Cambridge. 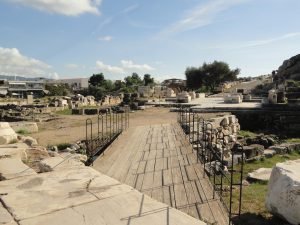 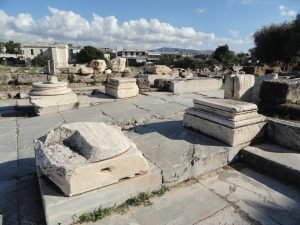 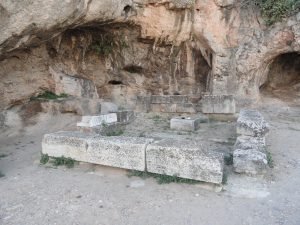 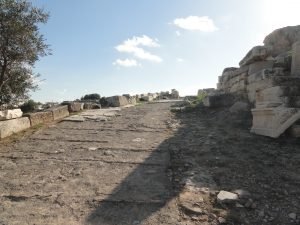 The main structure of the site was the Telesterion. It was a roofed building with seating on all four sides where the initiates sat, watched the rituals, and were inducted into the Mysteries. 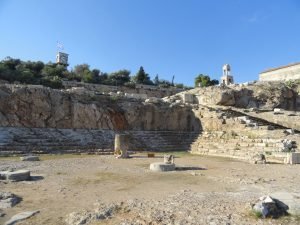 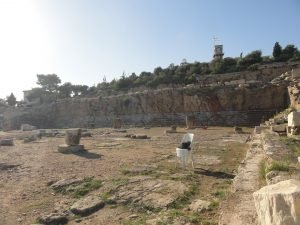 There are many other structures  to explore at the site, including the priests’ houses behind the courtyard as well as the various gates, walls, storage pits, cistern, fountains, and other structures which were part of the elaborate complex. 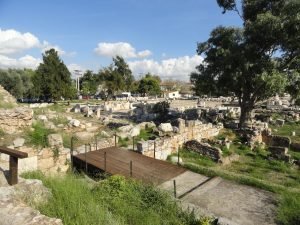 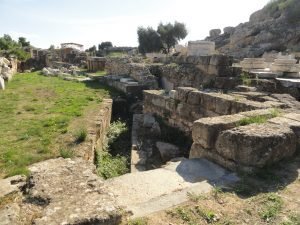 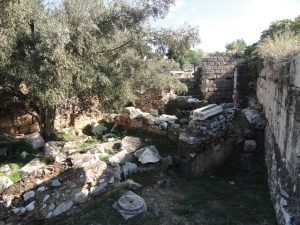 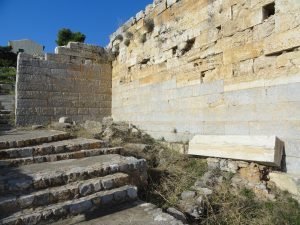 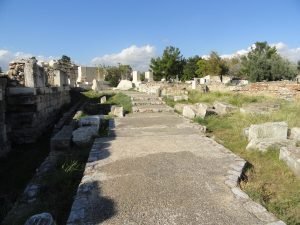 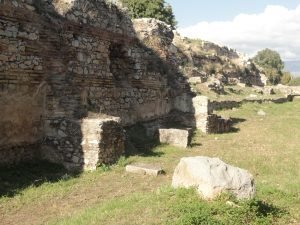 On the other side of the Telesterion is a stone stepped terrace leading to an upper courtyard, from which a nice view of most of the site can be had. 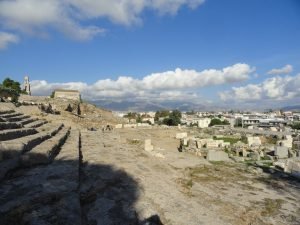 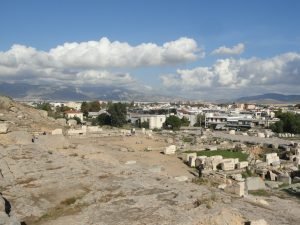 Beyond the upper courtyard is a small museum housing many of the finds from the site, including the upper part of one of the Caryatids mentioned above. 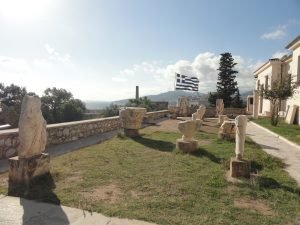 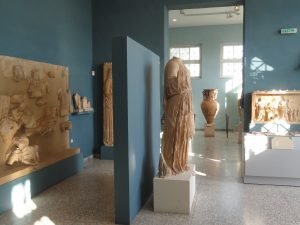 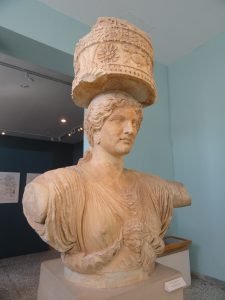 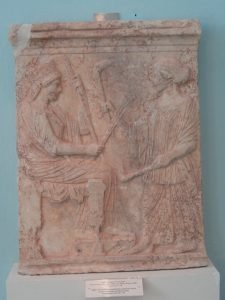 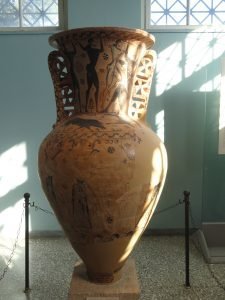 Tips for the Visitor
The town of Elefsina can easily be reached from Athens or Piraeus by public bus, as there are multiple city bus lines which head there. For example, there are city buses to Elefsina from the Agia Marina metro stop as well as from Piraeus, some of which pass near the Egaleo metro stop. There is also an intercity KTEL bus to Megara which departs from near the Thissio metro stop in Athens and stops in Elefsina on the way. Elefsina is a small town, and the site is within walking distance of all the transportation points.

As the archaeological site is considered a major one, it is open later than the usual 3pm closing time of smaller sites, but only in the summer. Admission (which includes the site and the museum) costs 6 euro.