Çatalhöyük (also written as Çatalhüyük, Çatal Höyük, and Çatal Hüyük) is one of the most fascinating and mysterious archaeological sites in the world. It is located in Turkey in the province of Konya 37 km (as the crow flies) southeast of the center of the city of Konya.

It was a fairly large settlement and is more than 9,000 years old. There were no streets there. The houses were clustered together, and the inhabitants of each house entered it by way of a ladder leading into each dwelling from the roof. The population could have been as large as 10,000.

The lowest levels of the site date back to 7500 BCE. In other words, the period of time between the beginnings of Çatalhöyük and the construction of the Great Pyramids of Giza was longer than the period of time from the building of those pyramids until now. The site was settled for nearly 2,000 years before it was abandoned.

The settlement ended more than 2,000 years before the earliest invention of writing anywhere in the world, so there are no written records at the site or even regarding the site. That, of course, means that there are many questions and very few answers regarding why the people of Çatalhöyük did the things which they did.

For example, the inhabitants of the houses buried their dead under the dirt floors on which they slept. Sometimes the body would later be exhumed and decapitated, and the skull covered in plaster and kept in the house. There were some deceased people who were buried cradling the plastered skull of another person in their arms.

There is also a question of the social structure of the settlement. So far it seems that there was no ruler or central authority. Was it an egalitarian society where everyone was equal? Also, the people buried together under the house were not always related to each other. That has raised questions about the connection of families and their houses, and has led to theories which say that the relationship of a family to a house was very different at Çatalhöyük than it is in most parts of the world today.

Another interesting aspect of the site is the evidence of cult practices. There are figurines and other artifacts which have led many to believe that the inhabitants of the site practiced some form of religion. To what extent it can be called a religion and the nature of it are issues which are still under debate.

All of these questions, as well as the extreme antiquity of the site, gives Çatalhöyük an aura of mystery about it.

The main thing to see are the two large excavation pits on the hill, each covered by a roof. 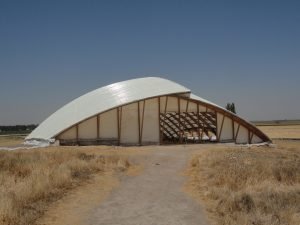 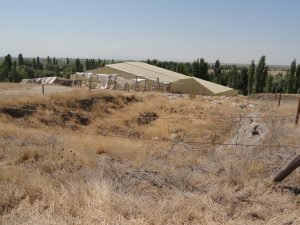 You can walk around the pits and peer into them. 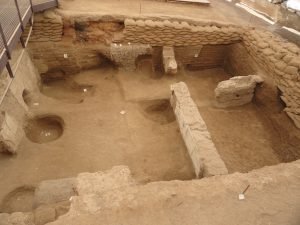 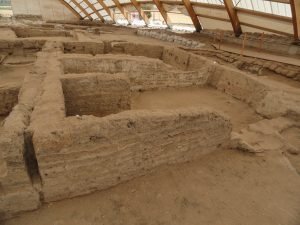 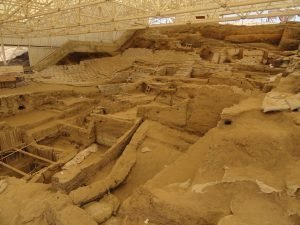 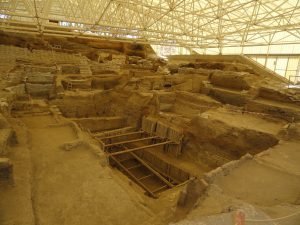 If you look closely, you can see some of the red markings on the walls left by the original inhabitants, including the famous red handprints. 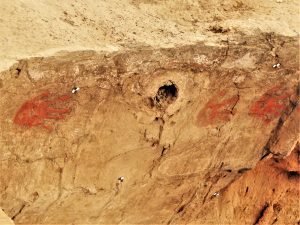 Near the entrance to the site is a reconstruction of what a house at the site looked like. You can go inside and take a look at the features and decor. 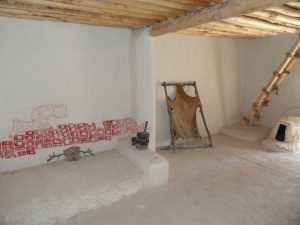 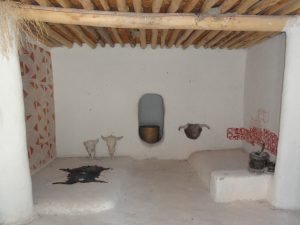 Perhaps the most significant artifact found there is the Seated Woman of Çatalhöyük (c. 6000 BCE). Some believe it is a statue of a goddess, and it is similar to much older statues found in Europe many other statues found in Europe which depict what is believed by many to be a “mother goddess” as a morbidly obese woman. The lighter-colored parts of the statue (the head and one of the animal-head armrests) are modern reconstructions. The statue is on display at the Museum of Anatolian Civilizations in Ankara. 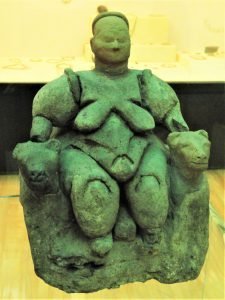 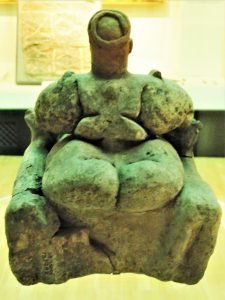 Murals showing hunts, such as these deer hunts, were also found at the site and are on display at Ankara’s Museum of Anatolian Civilizations. 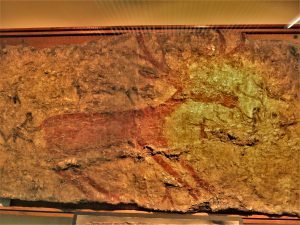 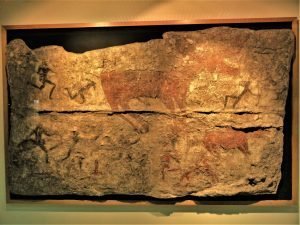 Tips for the Visitor
If you have a car or you are willing to hire a car from Konya, the drive to the site would take just under an hour each way. The most direct route would be to take Saraoğlu Caddesi (a bit of a country road) out to the village of Küçükköy, and then turn right and head south the last two kilometers to the site, which would be the shortest driving distance (42 km) from the center of Konya. You might save a few minutes by taking the highway (Konya Ereğli Caddesi) to the village of Sakyatan, and then head south on the country roads all the way to the site. To hire a car, you can usually make an arrangement with a taxi driver to take you there and back with a set amount of time to explore the site.

If you don’t have a car and you don’t want to pay for a taxi all the way from Konya, it might be cheaper to take a bus from the Konya bus terminal to the town of Cumra, and from there you can make an arrangement with a taxi driver to drive you the 13 km (15 minutes) to the site and wait for you for an hour or so, and then bring you back to Cumra, where there are frequent buses back to Konya. Note that at our visit, there was no taxi rank at the site, so don’t expect to be able to find a ride back if you arrange only one-way transportation. Also note that Konya is not a very popular destination for foreign visitors, so don’t expect taxi drivers to speak English.