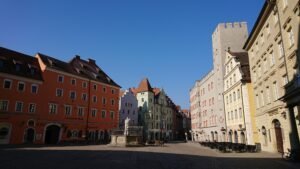 The city of Regensburg in Bavaria is known for its picturesque old town. Indeed, it is one of many places in Germany where visitors can enjoy a stroll along cobblestone streets admiring the kind of old-style architecture which takes one back into the past. But the history of the place goes back even further than the most visible architectural monuments suggest.

The Celtic tribes who controlled the area before the Romans arrived had a settlement there which was originally called Radasbona. The usefulness of the location was also recognized by the Romans. Situated at the northernmost point of the Danube, the wide river which would eventually form the boundary between the Roman Empire and the lands to the north of the Germanic tribes whom the Romans were never able to subjugate, the spot became a key location for Roman military forts (oppidum). The latest of these was called Castra Regina, and it was built by Emperor Marcus Aurelius in 179 CE. Most of what is left of this imperial frontier outpost has been buried under the streets and buildings of Regensburg’s old town over the course of centuries, but there are a few places where a visitor can find traces of it.

The most significant structure — found at Unter den Schwibbögen 2 — is the Porta Praetoria, which was the main central gate of the fortress facing the river (less than 100 meters away), and thus facing the the frontier and what laid beyond it. Most of it is gone, but traces of it have been preserved by their incorporation into the facade of the structure that now stands in its place. 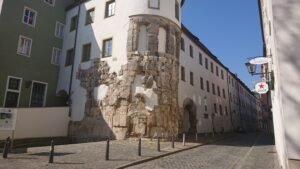 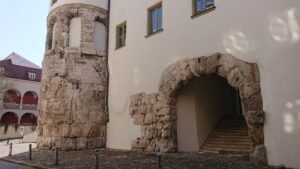 If you walk 200 meters east to St.-Georgen-Platz, you will find what is left of the northeast corner of the fortress, which was square-shaped in following with the standard layout of a Roman oppidum. Also visible here is the double-arched window frame that was part of a Romanesque church that once stood here was well. 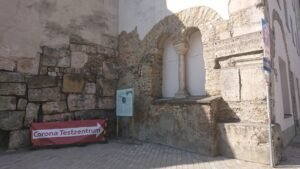 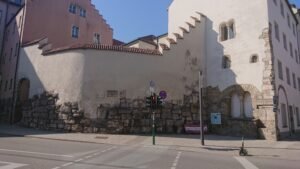 Walking south from the northeast corner for a few blocks, you will come to Dachauplatz and its parking garage, which stands over part of the east wall of the fortress. The impressive section of the wall here is preserved and displayed in a special underground exhibit under the parking structure, and it features some cool lighting effects as well as audio-visual displays. 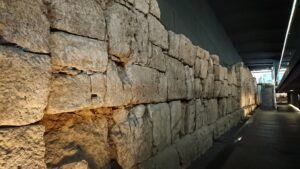 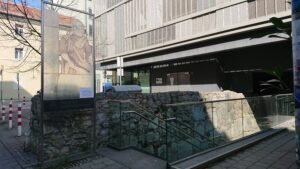 Curved stone walls and other associated structures which were part of the southwest corner of the fortress can be found just north of Ernst-Reuter-Platz, and about 300 meters north of the main railway station (Hauptbahnhof). 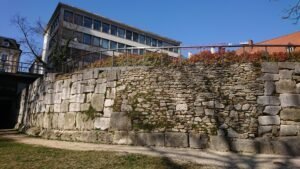 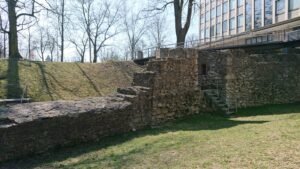 Some remnants of the Roman era can also be found inside and outside the Regensburg Museum of History, such as the columns, sarcophagus, and other stonework pictured here in front of the museum’s entrance. 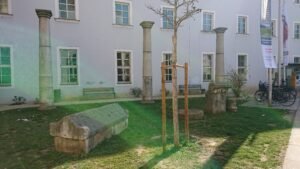 Tips for the Visitor
Due to its picturesque old town, Regensburg is a popular destination for visitors from Germany and abroad. The city is easily accessible by way of frequent trains from Nuremberg (around one hour) and Munich (an hour and a half).

As the ruins pictured above are now part of the fabric of the city, they are visible from the street by passers-by (except for the wall under the parking garage), and thus they are accessible anytime without any need to buy entrance tickets. And be sure to allow yourself ample time to see the rest of the old town as well.