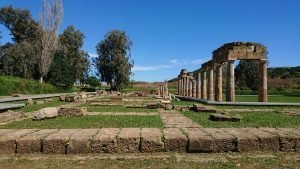 The archaeological site of Brauron is known locally as Vravrona and is located just west of the modern town of that name. The site is less than a kilometer from the east coast of Attica and 3.5 km east of Athens International Airport, although there is no road access to the airport from the east side. It is on the western edge of the Vravrona Wetlands, a hiking area crisscrossed with several trails which are sometimes flooded (see “Tips for the Visitor”).

In relation to other important ancient sites of eastern Attica, Brauron is 30 km north of Sounion and 22 km south of the plain of Marathon, where the famous battle of that name was fought. The site is also 23 km east of the Acropolis of Athens.

The site was a sanctuary dedicated to the goddess Artemis and was the center of the cult of Artemis Brauronia, an aspect of the goddess which protected females experiencing puberty, pregnancy, and childbirth. Another temple to the cult–the Brauroneion–was later built on the Athenian acropolis, and a procession was made from there to the sanctuary at Brauron once every four years. One ritual which was performed at the sanctuary (alluded to by the women’s chorus in Aristophanes’s play Lysistrata) involved prepubescent Athenian girls pretending to be young female bears.

The main attraction to see there today is a portico which in the 5th century BCE was lined with columns on three sides. The columns were constructed around the portico in which important rituals and ceremonies were held. 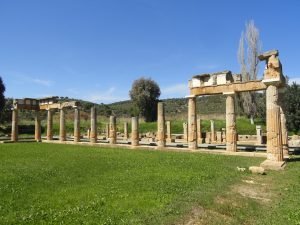 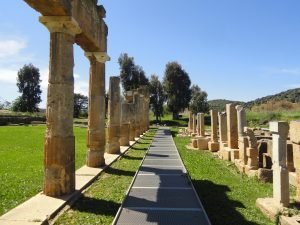 North of the columned portico was another portico. 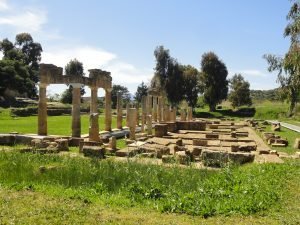 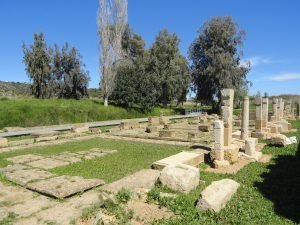 More important was the actual temple of Artemis, which was built on slightly higher ground at the foot of a hill just south of the porticoes. Unfortunately, only the foundation is left of it. 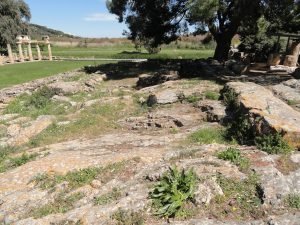 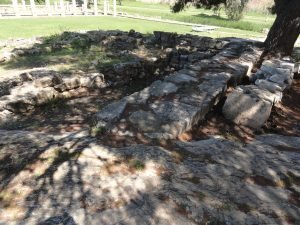 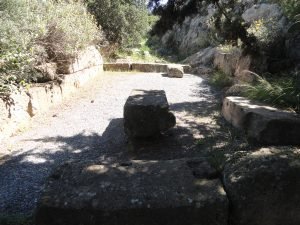 According to myth, Agamemnon’s daughter Iphigenia landed at Brauron after she returned from her refuge among the Taurians in the Crimea after being saved from becoming a human sacrifice at the hands of her father at Aulis at the outset of the Trojan War. Some stories (such as the one told by Euripides in his play Iphigenia in Tauris) had her living out the rest of her days there as the priestess of Artemis. In recognition of her supposed burial at the site, just east of the temple a cenotaph was erected where votive offerings were left for her.

In ancient times, the wetlands were not land at all, and so the sanctuary was right on the coast. However, the land there was still wet to a certain extent as there is a spring on the site which was considered sacred in antiquity. Just north of the spring, a stone bridge was built as part of the road to Athens across the Erasinos River, which flows past the western side of the sanctuary. 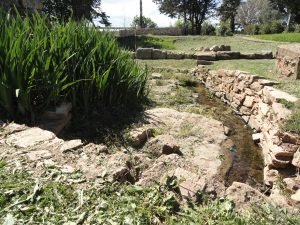 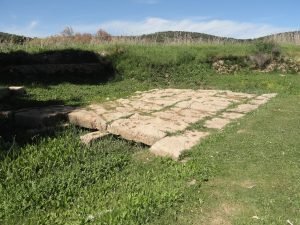 There is also a museum 350 meters east of the entrance to the site.

Tips for the Visitor
The best way to get to the site is by car, of course. You will have to drive around the western 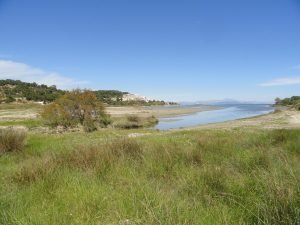 edge of the wetlands and approach the museum from the south. You can park in the small parking lot next to the museum and then follow the 350-meter path west to the entrance to the site.

Getting to the site without a car is a bit tricky but not impossible. From anywhere in central Athens, take the metro line headed towards the airport and get off at Nomismatokopeio Station. Upstairs on the street level right next to the entrance to the station is a small bus terminal where the 304 bus begins its run every half hour. Take the 304 to the end of the line, which is at the southern end of the seaside town of Artemida. 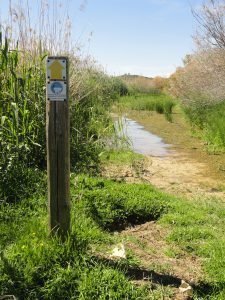 From the bus stop in Artemida, you will hopefully only have to walk another 1.5 km south to the site, but this is where it gets tricky. The 1.5 km walk requires the use of one of the paths leading through the wetlands, which runs from the entrance to the site directly north to the main road. However, the wetlands are often very wet, and the paths can be flooded or covered in thick, wet mud making them impossible to get through unless you are feeling extremely adventurous (not to mention willing to get very dirty). If you get to the entrance to the path (250 m northeast of the site) and you find this to be the case, you will need to continue along the main road and walk the same road you would take if you were driving–that is, walk the paved roads around the wetlands and approach the museum from the south. Unfortunately, this will add an extra 2 km to your walk. As you walk the stretch of the road next to the southwest corner of the site, you will be able to see the ruins close enough to admire them from there. However, there is unfortunately no entrance to the site on that road. You will still need to get to the museum first and then walk the 350-meter path from the museum to the entrance to the site, which is at the site’s southeast corner.