Beldibi Cave is located in the province of Antalya right next to the highway leading out from the city of Antalya heading south along the coast to Kemer. It isn’t a cave in the way that people think of tunnel leading into a rock—it is more like an indentation in the face of a rock creating a very shallow rock shelter. Although badly damaged by exposure to nature (as the shelter is shallow and not well protected), archaeologists in the 1960s discovered several layers dating back to the Paleolithic (Old Stone Age). 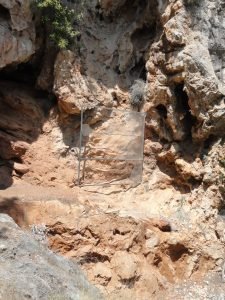 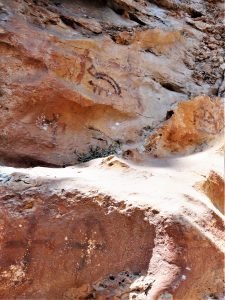 The rock shelter is peppered with many small prehistoric paintings. The figures are believed to represent humans and mountain goats. The paintings have glass panels in front of them to protect them. However, on our visit, the glass panels had been vandalized and mostly broken. 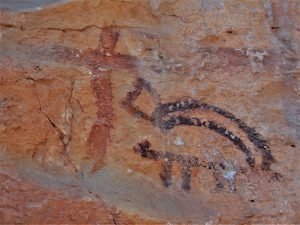 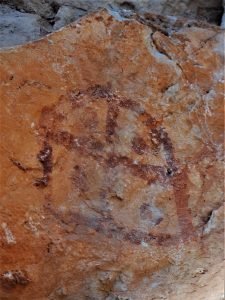 Tips for the Visitor
Travelling by car from the city of Antalya, drive south from the Antalya Aquarium on the Antalya-Kemer Yolu 20 km, and you will come out of a tunnel into the resort town of Beldibi. As soon as you come out of the tunnel, turn around and head east to go north through the other tunnel, the Çamdağ Tunnel. Just before the entrance to the Çamdağ Tunnel, pull the car over and you will see the rock shelter fenced in just to the right of the tunnel entrance.

Travelling without a car, you can take one of the many minibuses which service the seaside resort areas between Antalya and Olympos. Make sure you board one which stops in Beldibi, as not all of them do. You will need to get off the bus at the north end of Beldibi and walk the one or two kilometers to the south entrance of the Çamdağ Tunnel.