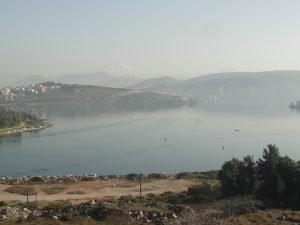 Ancient Aulis was situated on the eastern coast of Boeotia on the Greek mainland, just across the gulf which separates the mainland from the island of Euboea from the ancient city of Chalcis. As such, Aulis was 4 km south of Chalcis and 27 km east-northeast of Thebes.

Aulis was not an important town in antiquity, although it was settled as far back as the Bronze Age. The place is certainly best known from the Iliad, in which Homer tells us that it was at Aulis that the Greek fleet led by Agamemnon gathered to set sail on their expedition to lay siege to Troy. The episode is a memorable one as Agamemnon was required by the goddess Artemis to sacrifice his daughter Iphigenia at Aulis in order to earn a favorable wind for his fleet to set sail. In some versions of the tale, Iphigenia was whisked away at the last moment and carried off to Tauris, and then later served as a priestess at Brauron. Iphigenia’s story is retold in many other ancient sources such as Euripides’ Iphigenia at Aulis and Iphigenia at Tauris, and it also inspired later writers such as Goethe and Racine.

The only archaeology visible there today are the ruins of the Sanctuary of Artemis. Gazing at the altar in the back of the temple, it’s tempting to imagine Iphigenia herself lying on it while waiting to be sacrificed, but the oldest building phase of this temple was in the Classical period. Later phases came in the Hellenistic and Roman periods. 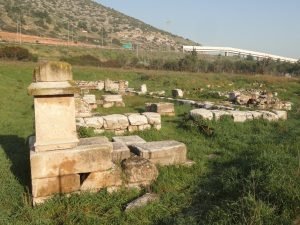 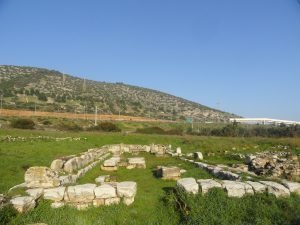 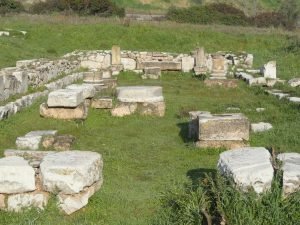 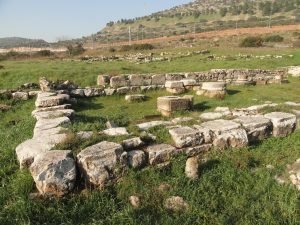 Pausanias stopped by in the 2nd century CE and reported seeing statues as well as part of a plane tree Homer mentioned as being the source of a spring there (9.19.5). The wood is long gone, but some of the statues that Pausanias would have seen there are on display at the Archaeological Museum of Thebes. 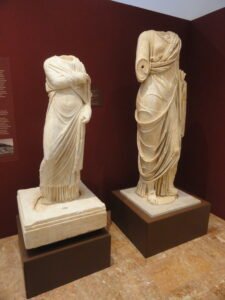 Tips for the Visitor
The grounds of the site are fenced in and closed to the public. However, it is possible to get a good look at the site from the road on the other side of the fence. (All of the photos in this article were taken from outside the fence.)

The site can be found on the side of a country road that runs parallel to the highway that connects Chalkida (Chalcis) and Athens. To get there by car, coming from the south, you need to exit the highway near the Chalkidas Shipyard and follow the country road north until you reach the site. If you’re up for a hike, the site is 4 km from the center of the town of Vathy, where you can get off the train that runs between Athens and Chalkida at Avlida Station. It’s about the same distance from Chalkida, as long as you don’t mind walking over the suspension bridge over the strait. 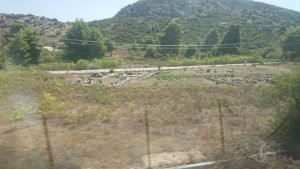 If you’re on the train and you just want to catch a glimpse of the site, you can do so from the comfort of the train as the site is right on the side of the tracks that run between Athens and Chalkida. About halfway between Chalkida Station and Avlida Station, if you’re sitting by the window on the east side of the train (right side coming from the direction of Athens, left side coming out of Chalkida), keep your eye out for the white marble rockpile. But try not to blink!