Although there is evidence that the site had been settled in earlier centuries, the foundation and naming of the city of Attalia dates to the middle of the second century BCE. It was founded by and named after Attalos II, who was king of Pergamon, in western Asia Minor. He was the same man who, as a gift to the city, built the famous extensively restored stoa which bears his name in the agora of Athens. In accordance with the will of his nephew and successor, Attalus III, the city of Attalia was given to Rome in 130 BCE.

Attalia was just 15 km southwest of Perge and 60 km west of Side. It was also not far from the many Lycian cities to the west, including Termessos (25 km), Phaselis (40 km), and Olympos (60 km).

Today, the city is called Antalya, and it is Turkey’s fifth-largest city. As it is now a sprawling metropolis, not much is left of the old Hellenistic and later Roman city. However, the historical quarter by the old harbor still preserves some of the charm of the older city. The best-preserved ancient monument is Hadrian’s Gate, which bears the name of the Roman emperor who passed through it when visiting the city in 130 CE. 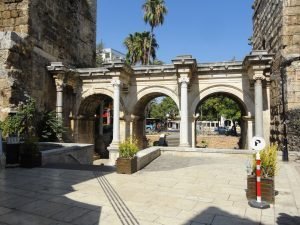 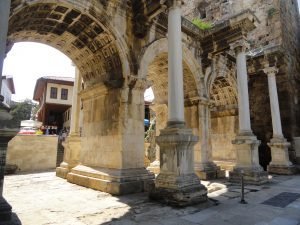 The old harbor is now used for sailboats. A nice view of the harbor can be enjoyed from the nearby Roman fortress. 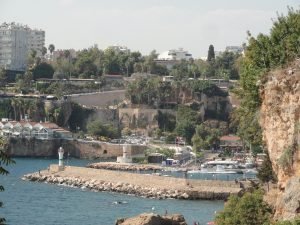 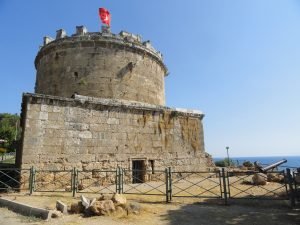 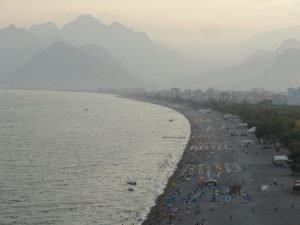 Tips for the Visitor
Antalya has a huge bus terminal with buses heading to destinations throughout the province of Antalya as well as throughout the country. The city also has its own international airport. Antalya is the center of a huge resort area, which features tons of accommodation not only in the city but all along the coast of the surrounding areas, especially along the coast to the south of the city. The beaches, water activities, and the mountainous backdrop make seaside resort towns such as Kemer, Beldibi, Çamyuva, and Tekirova very popular among tourists from all over the world. Also popular are some more laid-back, less developed seaside destinations like Olympos/Çıralı and–a bit further afield–Kaş (Antiphellus).

For fans of rockpiles, it is a great area to use as a base. There are more than a dozen archaeological day-trip opportunities from Antalya. The spectacular Antalya Museum–just 2 km west of the old town–is also a must-see for archaeology enthusiasts.