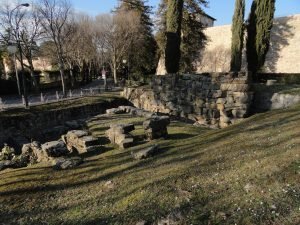 The town of Arezzo is located in the Italian region of Tuscany 60 km southeast of the Tuscan capital, Florence. As Aritim, it was an important city of the Etruscan civilization before it was conquered in 311 BCE by the Romans, who called it Arretium.

Traces of the ancient city can be seen here and there, such as in this rockpile (pictured left) next to the southwestern wall of the Medicean fortress on the northeastern edge of the town center.

The main ruins, however, are those of the Roman amphitheater 350 meters east of the train station, although those ruins make up not much more than a rockpile, either. 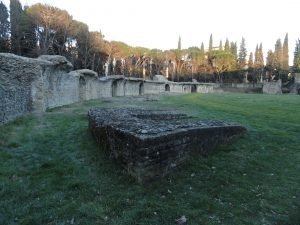 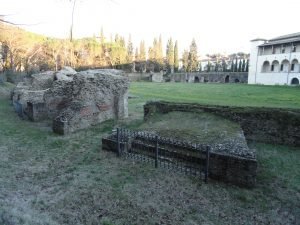 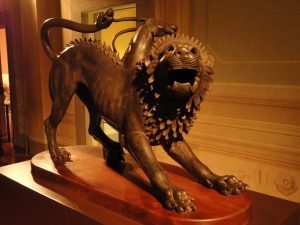 There is a small archaeological museum next to the amphitheater. However, if you want to see Arezzo’s most famous artifact, you will have to go to the National Archaeological Museum of Florence. The Chimera of Arezzo, as it is known, is a masterpiece of Etruscan art dated to the 5th century BCE. It depicts a mythical fire-breathing beast, the chimera, which was defeated by the hero Bellerophon. The myth is believed to have originated at the site of the naturally occurring flaming vents near the ancient Lycian city of Olympos.

Tips for the Visitor
Arezzo is located on the train line between Florence and Perugia. It would take a little over an hour to get to either of those cities from Arezzo.