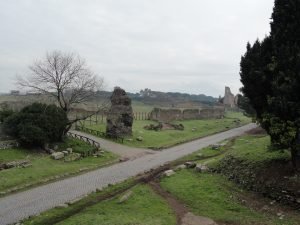 The Appian Way, which is called Via Appia in Latin and Italian, was the ancient road which started at the southern walls of Rome and continued all the way to Brundisium (modern Brindisi, in the “heel” of Italy’s “boot”). It was built in the 4th century BCE. One of the most significant events in its history came in 71 BCE when thousands of rebellious slaves from Spartacus’s uprising were crucified along the section of the road closest to Rome.

The best place to see the road today is just outside of Rome, where the road and the archaeological treasures found along it are preserved as part of the Appia Antica Regional Park. The cobblestone-paved portion of it extends south for 11 km to the town of Ciampino. The unpaved section of the path and the park protecting it continue south for another 4 km until the path turns into a highway in the town of Frattocchie,  just 4 km before reaching the papal retreat at Castel Gandolfo. 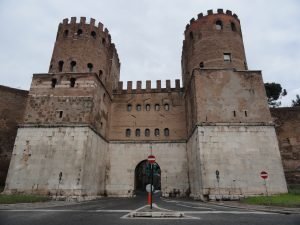 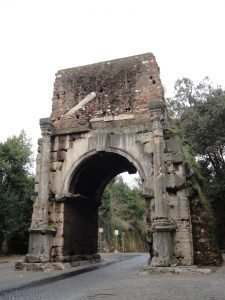 The road begins at the Porta San Sebastiano, one of the main gates on the southern section of Rome’s Aurelian Walls and home to the Museo della Mura, a museum dedicated to the city’s historical walls. Just before reaching the gate on the way out of Rome, a traveler would have passed under the Arch of Drusus. The road under the arch was part of the original Via Appia at the time when the earlier Servian Wall formed the boundaries of the city, but became part of the city once the Aurelian Walls were built further out in the 3rd century CE. 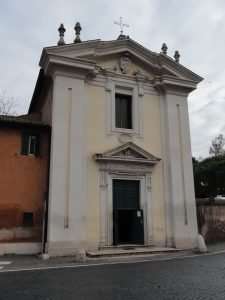 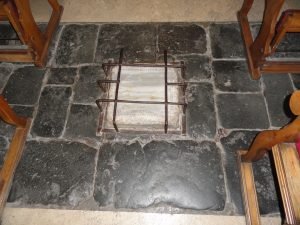 800 meters past the Porta San Sebastiano is the Church of St. Mary in Palmis, which is popularly known as the Church of Domine Quo Vadis. It was there that St. Peter had a vision of Jesus Christ while he was fleeing Rome by way of the Via Appia to avoid martyrdom, according to Acts of Peter, one of the apocryphal gospels. By that account, Peter asked Jesus, “Domine, quo vadis?” (Latin for “My Lord, where are you going?”), to which Jesus replied that he was on his way to Rome to be crucified for a second time (“Eo Romam iterum crucifigi”). It is said that Peter realized from that vision that he needed to return to Rome to continue his missionary work and face whatever persecution might come about. (Church tradition holds that Peter was later crucified in Rome upside-down.) In the center of the church is a replica of a marble stone bearing two footprints, said to have been made by Jesus when he appeared to Peter. The original stone is kept in the Basilica of San Sebastiano, which is 1.6 km further down the road.

Soon after the Basilica of San Sebastiano, the road is closed to all vehicles except those of locals, and things get more tranquil and interesting. You can walk along the ancient paving stones of the road and see the many Roman tombs and memorials built along the way, including the 1st-century-BCE fortress-like tomb of Caecilia Metella, the wife of one of Crassus’s sons. 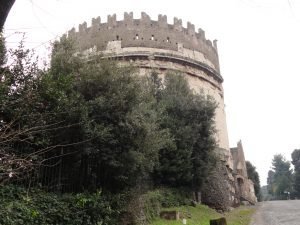 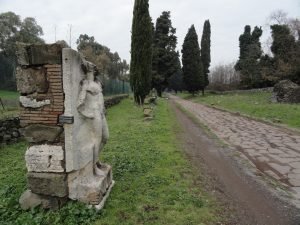 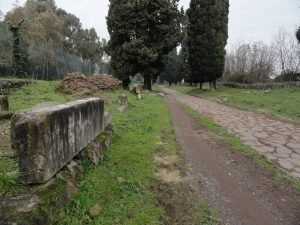 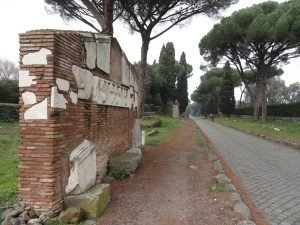 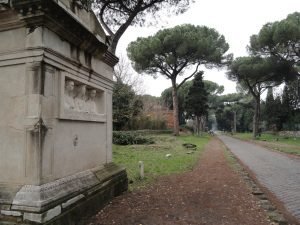 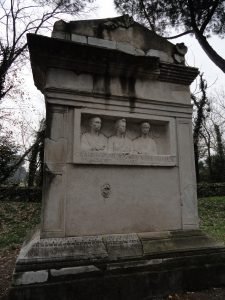 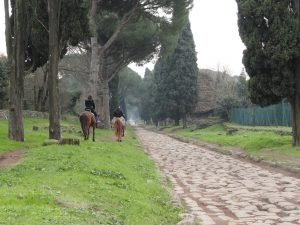 You may even come across people riding horses, just as some would have been doing there in ancient times.

Tips for the Visitor
The best time to come is on Sundays and holidays when the entire Via Appia is closed to traffic (as opposed to just the pedestrian area). However, note that the Catacombs of San Sebastiano are closed on Sunday. There is another nearby catacombs (San Callisto) which is closed on Wednesdays.

The Porta San Sebastiano is only about a 2-km walk south of the Colosseum. Alternatively, there are several metro stops within a 20-minute walk: Circo Massimo, Piramide, Garbatella, S. Giovanni, Re di Roma, and Ponte Lungo.

If you don’t want to do too much walking, you can catch the 118 bus southbound from the Colosseum or the Circo Massimo metro station. It will take you past the Baths of Caracalla, under the Arch of Drusus, through the Porta San Sebastiano, past the Church of Domine Quo Vadis, and leave you in front of the Basilica and Catacombs of San Sebastiano, shortly before the point at which the Via Appia becomes pedestrian only. (On Sundays, however, the entire Via Appia is closed to traffic.)

In terms of accessibility, the Appian Way is officially just a street, so there are no opening and closing times, nor are there any entrance fees.

Note that the ancient part of the road is called the Via Appia Antica, not to be confused with the more recently constructed Via Appia Nuova.