Alaca Höyük (also written as Alacahöyük) is one of the most important archaeological sites in Turkey. It is located 150 km east of Ankara in the province of Çorum.

The site today enjoys the status of being a national park, perhaps a testament to it being recognized by contemporary Turks as a key part of early Anatolian history. Another sign of this recognition can be seen in the center of Ankara, where one of the city’s most iconic monuments is the Hatti Monument—a giant version of one of the metal standards found in one of the royal tombs of Alaca Höyük.

The 13 royal tombs date back to the second half of the third millennium BCE. At that time, the site was a Hattian settlement. The metal figures of stags and bulls as well as the metal sun disks found in the tombs are today housed in the Museum of Anatolian Civilizations in Ankara. Below is a photo of one of the royal tombs with a replica of a figurine in the foreground, and a second photo of one of the original figurines now in Ankara. 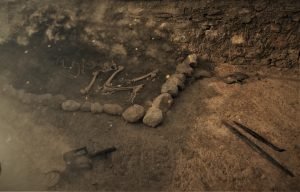 At the beginning of the second millennium BCE, the Hittites took over the region and the site became a Hittite city. Exactly which Hittite city it was is still a matter of debate, although Arinna is a very strong candidate. It is clear from Hittite records that the sun-goddess of Arinna was one of the most important deities in the Hittite religion, and every spring there was a sacred procession from the capital of Hattusa which passed through Arinna. (As the crow flies, Hattusa is only 25 km south of Alaca Höyük.) The fact that the walls of the temple-palace complex at Alaca Höyük featured images which are probably depictions of that procession lead credence to the theory that this was indeed Arinna. You can see replicas of those bas reliefs at the site (left photo). The originals can be viewed at the Museum of Anatolian Civilizations in Ankara (right photo). 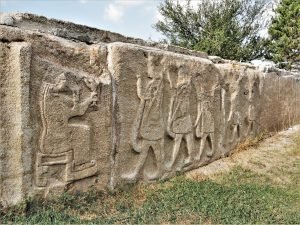 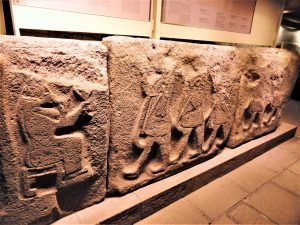 The most striking feature to survive of the central complex is the gate at its southern end. The gate is guarded by a pair of stone sphinxes, which clearly show the influence of Egyptian art in the Hittite Kingdom. The sphinxes there today are replicas (left photo), while the originals are in Ankara (right photo). 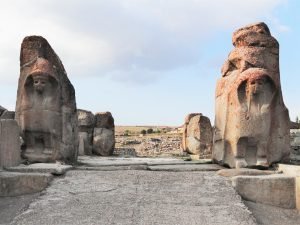 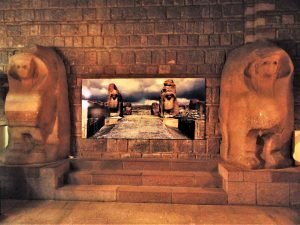 The rest of the site today is essentially a series of classic rockpiles. 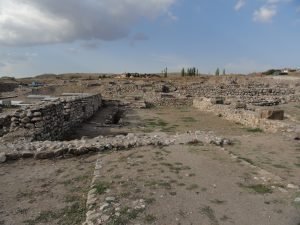 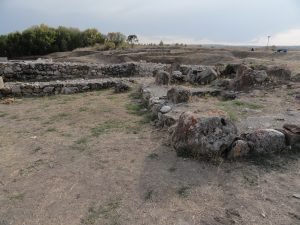 However, there is an interesting tunnel similar to (but smaller than) the one at the southern part of Hattusa. 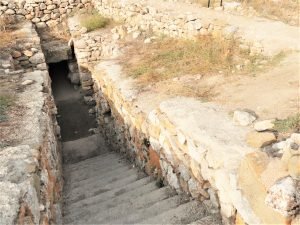 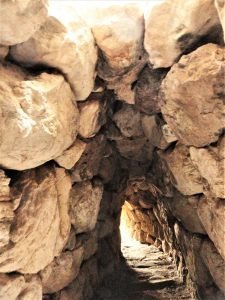 Although Alaca Höyük’s most significant finds are preserved at the Museum of Anatolian Civilizations in Ankara, there is a very small museum at the site with some of the less significant (mostly ceramic) artifacts found at the site. 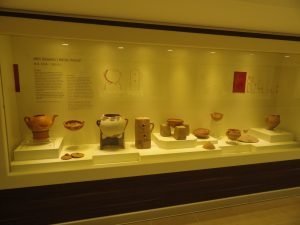 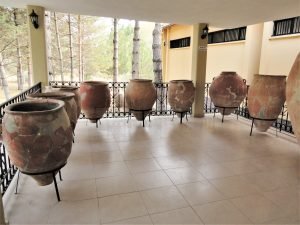 Tips for the Visitor
There are some tour companies that organize daytrips to see both Hattusa and Alaca Höyük in the same day.

Doing Alaca Höyük on your own is not easy. The village of Alacahöyük, where the site is located, is very small with limited if any public transportation. The easiest thing to do is arrange a price for a taxi driver to take you there from either Boğazkale (where Hattusa is) or Sungurlu (a fairly large town on the highway where you can get on and off of intercity buses traveling between Ankara and the city of Çorum). Both Boğazkale and Sungurlu are about 35 km from Alacahöyük on the highway.