Around 2.5 km north of the main town of the Greek island of Aegina and its accompanying archaeological site of Kolona, there is a pair of rocky promontories pointing due north, separated by less than 200 meters of sea. Near the tip of the west promontory is a house which was built by the writer Nikos Kazantzakis in 1936 and served as his home from time to time during the last two decades of his life. And at the very tip of that promontory, just across the road from the Kazantzakis house, there are traces of what was once a necropolis which appears to have been cut into not only the west promontory (below, left) but the east promontory as well (below, right). It is possible that some of the land in between the two promontories has eroded into the sea, taking part of the necropolis with it. 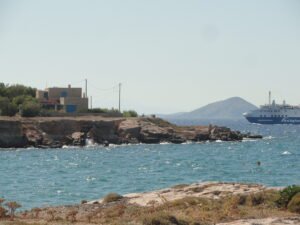 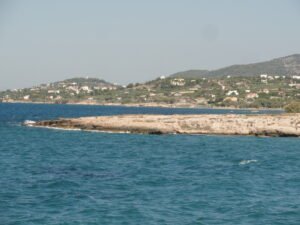 In fact, most of the graves today can be found on the east promontory, which is preserved and signposted as an “archaeological site.” 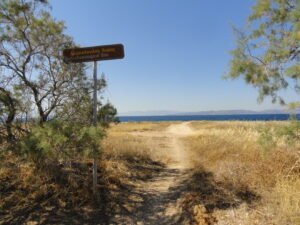 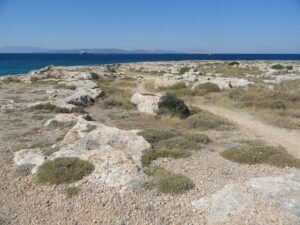 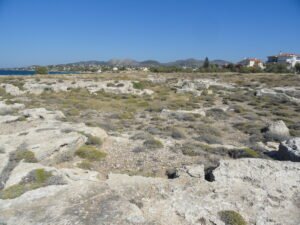 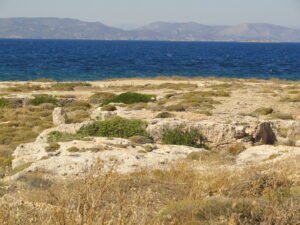 No other information about the site is offered there, but according to local lore, it was here that Aegina buried its own casualties from the Battle of Salamis in 480 BCE. Aegina was at that time a rival of Athens and a formidable sea power both economically and militarily. Aegina played an important role in the events leading up to the great naval showdown in which the states resisting the Persian invasion fought and defeated the fleet commanded by the Persian King Xerxes, although in reality most of the “Persian” ships were from Greek states loyal to Xerxes. Despite earlier displays of fealty towards the Persians, Aegina decided to stand with their free Greek neighbors against the Persians and contributed 30 ships to the fleet, according to Herodotus.

No traces of the corpses or grave goods from the burials remain at the site. The only way to understand it was a necropolis is from the many rectangular voids that have been cut into the rock, and the proportions make it obvious that they must have been graves. Some of them–despite being empty–are still well preserved. 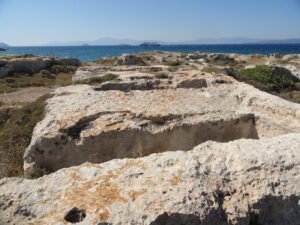 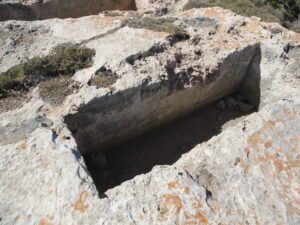 Tips for the Visitor
From the main town or from the archaeological site of Kolona, the necropolis can be reached by foot in around 30 minutes. It would take a bit longer to walk or drive along the seaside road the whole way, but if you’re not in a rush it’s worthwhile to do so for the views.

The signposted necropolis site on the eastern promontory is not fenced in and is free to be explored at any time. Also, there are many small bays in the area (including the one between the two promontories) which are popular for swimming in the summer, so bring your swimsuit if you fancy a dip.

Although it does not appear to be in use, the Kazantzakis property is privately owned and is not open to the public.